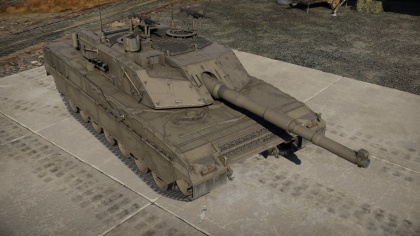 The C1 Ariete is the least armored top tier MBT currently in the game but that does not mean it has no armor to speak of. The turret front is decently protected especially with the WAR kit modification allowing it to stop all APFSDS rounds fired from guns smaller than 120mm as well as most of the weaker 120mm APFSDS rounds such as the 3BM22, L23A1 and DM13. The WAR kit also makes the turret invulnerable to all HEAT threats except for tandem ATGMs. The mantlet on the Ariete is not too large but it will be your weak spot from the front but that is also true for all other MBTs. The gunner and commander sit on the left side of the turret while the loader sits on the right, and the large optics block on the left side of the turret can occasionally save your gunner and commander by soaking up the post penetration damage.

Unfortunately that's where the armor ends, the hull is one large weak spot with a huge LFP consisting of just one angled 50mm plate that won't stop anything fired at you even from 8.7 vehicles; while the UFP is made out of spaced armor that can only stop auto-cannon rounds or 105mm APDS shells. Shots through the hull will most likely take out the tank immediately, a shot on the left side of the hull front would take out the driver, gunner and commander, while a shot to the right side would hit the first stage ammo rack. Like most top tier vehicles, the tank sides offer little protection, though the fuel tanks in the side of the hull might soak up the occasional HEAT round but it isn't something you can rely on. Ultimately, it is advised to play this tank away from the front lines sniping whenever possible peaking from behind cover to maximize the use of your turret armor.