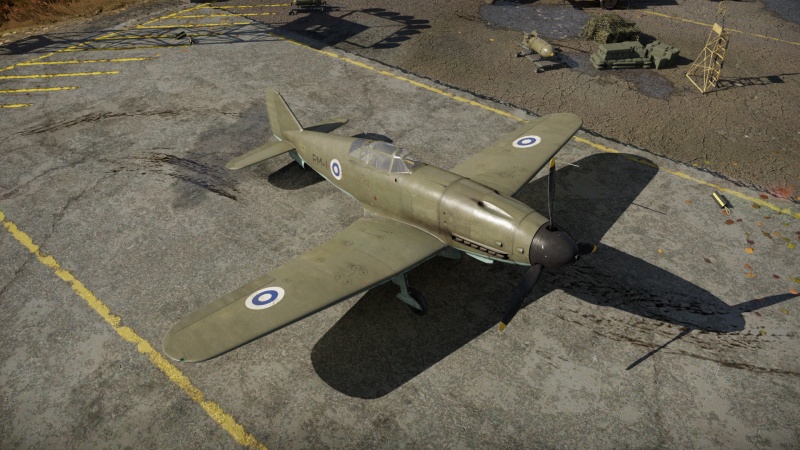 The VL Pyörremyrsky is a premium gift rank III Swedish fighter with a battle rating of 4.3 (AB/RB) and 3.7 (SB). It was introduced as a premium pack in Update 1.93 "Shark Attack". It was removed from the Gaijin store after the 2022 May sale.

Though the Pyörremyrsky shares some design traits with the Bf 109 series of German fighters, it is in fact a completely domestic Finnish design and has significantly different flight characteristics.

This aircraft, having only one spar in each wing along with its water coolant system, is not a hugely durable aircraft - though it's not fragile either. The combined 20mm of spaced amour behind the pilot is fairly effective for protection but a lack of any frontal armour makes the Pyörremyrsky very vulnerable in head ons or in bomber hunting.

The VL Pyörremyrsky is armed with:

The VL Pyörremyrsky can be outfitted with the following ordnance:

This 1945 aircraft is not a great fighter to low-level pursuits where really great top speed is crucial. But instead, use this plane for medium-altitude engagements. Where an altitude advantage allows the Pyörremyrsky to increase the speed and surprise its enemies with a proper turn rate. This aircraft excels in both boom 'n' zoom but is also an excellent dogfighter, sporting fantastic low speed handling characteristics (especially with combat and takeoff flaps), a steady gun platform and, as previously mentioned, a fairly tight turning circle.

The Pyörremyrsky climbs really good and maintains adequate speed up to approximately 5,000 m, this is more than enough speed to initiate combat actions, albeit Finnish pilots can continue the climb to allow themselves more combat choices. Oppositely, they can remain below the 5,000 m and work together with their Swedish brothers to down all the enemy team; the Pyörremyrsky often acting as the decoy. The engine power is favourable, and under WEP produces over 1,400HP which the Pyörremyrsky can maintain almost indefinitely with proper radiator and oil radiator management.

The intercepting role varies somewhat nonetheless. Pyörremyrsky does not offer great frontal protection, so engaging bombers with good turret protection is not the best idea. Specially bombers like the mighty Soviet Pe-8 or the German He 219 A-7 which are loaded with high-calibre weapons able to harm your pilot with a direct shot or break the light Pyörremyrsky apart. The rather reserved ammo count also limits the input damage against bombers. Because of that same reason, head-on attacks are ill-advised, only should be attempted versus planes with a good turn rate and light airframe. Usually the Japanese Zeros, The British Spitfires or the Italian C.205s. Though, there are exceptions where the player must know how to engage a specific enemy. When to dive away or when to engage in a turning duel.

The Pyörremyrsky is not the fastest plane in here. Therefore players need to consider 2 main roles if they seek good rewards in the Pyörremyrsky flying over the tank's battlefield.

In this role the Pyörremyrsky will take no bombs and instead climb over the battlefield, diving down and taking attacks of opportunity against enemy aircraft. The aircraft excels in this role as it preserves energy well and even if lured into a low level dogfight, will still be in home turf if in the hands of a skilled pilot.

Generally, the target planes are attackers with low top speed or fighters with bombs, so the Pyörremyrsky should have no trouble downing them with a surprise advantage.

Here the Pyörremyrsky performs as a light strike fighter armed with the 4 x 100 kg bombs. This bomb load for a single engined fighter is very good and lends the Pyörremyrsky a fantastic multi-role capability. The bombs can inflict some serious damage and then the aircraft can serve to preserve air superiority over the battle.

Crew exposed vehicles or light tanks can also be destroyed with the heavy machine guns or cannons, both of which have good AP belts and can inflict some damage to armoured vehicles from a top-down approach.

Pyörremyrsky, meaning hurricane, tornado or whirlwind in Finnish (pyörre > vortex/whirl, myrsky > storm), was the name of a Finnish fighter design at the end of WWII. Designed by Torsti Rafael Verkkola (1909-1977), the chief designer of Valtion lentokonetehdas (VL or "State Aircraft Factory") and the designer of the previous Myrsky fighter and the Pyry trainer, the Pyörremyrsky was conceived as a domestic equivalent to the Messerschmitt Bf 109G.

Conceptually, the Pyörremyrsky was very similar to the Bf 109G: it was powered by the same Daimler Benz DB605 engine and had a similar armament, consisting of one hub-mounted 20 mm MG 151/20 cannon and two 12.7 mm hood-mounted machine guns. However, the design was optimized for domestic production, making maximum use of wooden sub-assemblies, and crucially, unlike the Bf 109, it used a wing-mounted landing gear with a wide ground track, giving the design better handling on the ground.

Design and construction of the Pyörremyrsky met significant delays, and while the original tender called for a prototype to be ready in May 1944, it wasn't until 21 November 1945 that the prototype was ready and made its first flight.

The end of the War saw Finland's military subjected to severe restrictions under the Moscow Armistice, which also called for a reduction of its forces. This limited the air force to only 60 fighter aircraft. As a result, the Pyörremyrsky became surplus before it even reached production as Finland chose to retain the Messerschmitt Bf 109 G as its primary fighter for economical reasons. The last of the Finnish Bf 109 Gs bowed out of service on March 13th 1954. The sole completed prototype of the Pyörremyrsky was put into storage after its last flight on July 22nd 1947, and stricken from the Finnish Air Force's inventory on April 1st 1953. Fortunately the prototype was preserved: it is now displayed at the Aviation Museum of Central Finland in Tikkakoski.