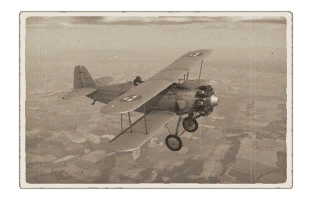 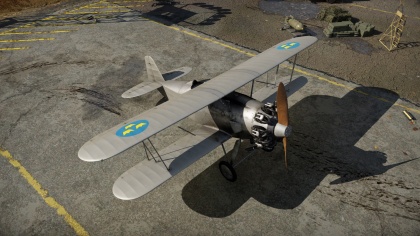 The J6B is a follow on development to the Svenska Aero AB (SAAB)’s venture into developing biplane fighters for the Swedish military. Having relied on foreign examples already in production, Svenska Aero attempted to combine the best of what they found into a single aircraft. The first iteration developed was the J5 Jaktfalken and for a first try was a really good fighter, though besought with a few critical problems.

Modifications to fix the problem were aimed at reworking the fixed landing gear and widened the front part of the fuselage to incorporate the new Bristol Jupiter engine which was replacing the current Armstrong Siddeley Jaguar 14 cylinder radial engine which was originally specified. Most problems were fixed after Svenska Aero merged with Armstrong Siddeley Jaguar which included a modified stabilizer and a windscreen for the pilot and this model became known as the J6B.

With the major problems behind the upgraded J6B, several were deployed with the Swedish Air Force and a few saw action while on loan to the Finnish Air Force. Though not a top speed aircraft compared to other reserve aircraft in the game, this fighter does utilize two 8 mm machine guns in which to eliminate its foes. Ammunition choices allow the pilot to select what is needed by what type of mission is available on the map. While its slower speed will not see it winning any speed competitions, it will, however, handle well in turning manoeuvres and if enough altitude is gained, Boom & Zoom tactics are an option against other turn fighters which are flying circles around the battle zone chasing each other. When firing against other aircraft, the 8 mm machine guns will do quite a bit of damage if fired within the 100 m to 300 m range as any farther out and you risk weaker shots making contact and not doing as much damage.

Assumptions can be made about this aircraft, however, pilots who fly it can prove that this biplane fighter is no slouch.

Like many aircraft just prior to the break out of World War II, the J6B was not outfitted with any armour plating. The J6B relied on its engine to get the aircraft where it needed to go and helped the aircraft get into a position where the guns should shoot down an enemy, any attempts to install armour plating would have only slowed down the already relatively slow biplane which would not have been worth the trade-off.

To maintain the centre of balance for this fighter, the pilot, fuel tank and engine take up the fuselage from the middle to the front, any attacks on this aircraft in this zone risk hitting a critical component, ending the J6B's fight in the battle earlier than expected. With an open cockpit, fabric coverings and a mediocre engine, the survivability of this aircraft, for the most part, rests in the pilot's hands and their ability to out-think the enemy pilots.

The J6B is armed with:

The Swedish Air Force chose to outfit the J6B with license-built copies of the Browning M1919 machine gun, however originally was calibrated for 6.5 mm however this round was found to be less effective against fabric-covered aircraft and so the gun was recalibrated up to 8 mm. The Swedish variant is listed as the Ksp m/22 machine gun of which two were mounted on this fighter. One of the benefits of the armament setup on the J6B is that both machine guns are mounted in the fuselage, synchronized to fire through the propeller arc. Effectively, this aircraft is a point-and-shoot where the pilot will not have to deal with wing-mounted convergence calculations, however, bullet drop over distance is still a consideration. Typically in biplanes, the most effective range for disabling or destroying another aircraft, 100 to 250 m is best for close-in fighting, typically as one gets farther out from there, bullets lose some of their punch.

Many ace pilots from all sides of the war stated that when the enemy filled the windscreen, there was no way you could not hit, thereby guaranteeing a hit and conserving ammunition. The J6B does not have the machine-gun speed of those found on some Russian biplanes as it is necessary to synchronize the firing of the guns in the fuselage to fire through the propeller arc. With ??? rounds of ammunition distributed between both machine guns, it is recommended to fire in short bursts, mainly to prevent overheating and jamming of the machine guns. Typically you can continuously fire about ??? rounds of ammunition before the guns jam up and require a cool down before they can be used again.

Svenska Aero AB (SAAB) worked on a private venture to develop a biplane fighter, and to build a fighter which the Swedish Air Force could use, however guidance and direction were not forthcoming by the military, so Svenska Aero turned to foreign-built aircraft to gain inspiration from what was working. The resulting fighter was the Jaktfalken, a relatively standard biplane format fighter which utilised fixed landing gear and like many other early fighters a tail skid instead of a wheel. While the fuselage was constructed of welded beams which were covered in fabric, several portions of the fore and aft section were covered with aluminium sheeting. A 14-cylinder Armstrong Siddeley Jaguar radial engine was outfitted with a fuel tank just aft with the cockpit following right behind.

Initial tests of this aircraft resulted in positive reviews by test pilots of the Swedish Air Force, leading to the military to order three Jaktfalken to be built which would then side-by-side be tested against the British Bristol fighter the Bulldog II. The Jaktfalken prototype became known as the J5 by the Swedish Air Force, however, at the last minute in February 1930, the Air Administration reconsidered the ASJA 14-cylinder engine and ordered it to be replaced by a Bristol Jupiter engine which would become the standard engine to be used in the Swedish Air Force. To accept the new Jupiter VII engines, the fuselage needed to be modified along with the engine attachment points. Unfortunately, during test flights severe vibrations were encountered and further attempted modifications failed to correct this. Even with the vibrations issues unresolved, three of these fighters were delivered to the Swedish Air Force and redesignated as J6A fighters.

Later as Svenska Aero and Armstrong Siddeley Jaguar merged, they worked on the issues plaguing the Jaktfalken fighter and installed a modified stabilizer and a windscreen for the pilot (previous versions did not have one) and these versions were delivered to the Swedish Air Force as J6B Jaktfalken II fighters. These fighters served the Swedish military for several years with three of them given to Finland to augment their air force during the 1939-1940 Winter War with the Soviet Union. By the end of 1941, all remaining operational J6B Jaktfalken II fighters in the Swedish inventory were scrapped and replaced by newer and more reliable fighters.