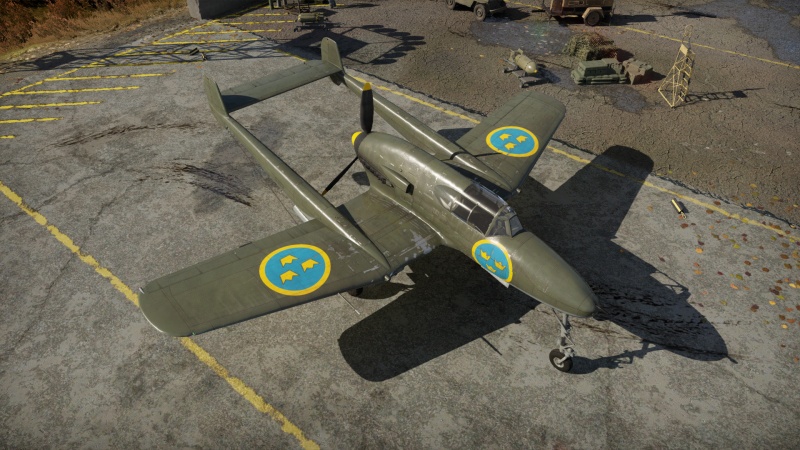 The J21A-2 (along with the rest of the J21A variants) is an excellent energy fighter. The plane retains and gains speed very well, as long as it is flying in a straight line. In level flight or in a dive, the J21A is very fast and can outrun most of its opponents. Additionally, it can manoeuvre quite well compared to some of its opponents but pilots must watch to ensure their speed does not drop too low as this makes the J21A an easy target. The nose-mounted armament makes it possible to successfully fight head-on with opponents and the 20 mm cannon is especially devastating when combined with the 13.2 mm machine guns. This armament also makes the J21A good as a bomber-interceptor since it can knock out critical components of an opponent's aircraft very quickly.

Overall, the J21A was designed (and should be used) as an interceptor. One excellent tactic is to climb at about 20 degrees until reaching 4,000-5,000 m and operating from that altitude in a boom-and-zoom role. This enables the J21A to use its excellent dive speed and heavy armament to maximum effect.

Another effective tactic is to fly level and fast at medium altitude 2,000-3,000 m and act as a support fighter, assisting team mates who are overwhelmed by picking off some of their opponents in hit-and-run attacks. While the J21 can manoeuvre quite well (especially with combat flaps) it is not advisable to do this except as a last resort because the aircraft bleeds speed very rapidly. Also, this can expose the J21's engine (mounted in the rear of the aircraft) to and an enemy, allowing him the opportunity to knock out the J21's engine or hit its fuel tank (centrally located between the cockpit and the engine). This is another reason to avoid running away from an opponent, except when you can dive faster than the enemy or outclimb him. Many planes at the J21's level can keep up with it, although many also cannot. As long as you know your opponent and their capabilities, you can use the J21 very effectively.

The J21A-2 was a variant of the Saab 21, a twin-boom propeller fighter used by the Swedish air force. A unique design, it had a pusher-configuration engine and a twin-boom tail, giving it a very unique appearance. The J21A-2 was the second production variant of the J21 fighter, featuring a Swedish-built 20 mm cannon along with numerous other refinements. A total of 124 J-21A-2 aircraft were built in two batches; these aircraft served as the mainline Swedish fighter until the introduction of more capable jet-engined fighters.

In the early 1940s, it was apparent that Sweden badly needed a new fighter aircraft. Thus, Sweden ordered SAAB to design a new aircraft based on the German Daimler-Benz DB 601, 603 or 605 engine. At that time, the German and Swedish had a series of neutrality agreements, allowing Sweden to import the German-made aircraft engines. One radical configuration considered was a twin-boom aircraft, similar to the P-38 Lightning, but with a single rear-mounted engine in pusher configuration. However, SAAB was initially asked to instead produce the J23, a more conventional aircraft design.

In late 1941, the Swedish air ministry reverted to its previous decision and asked the SAAB firm to produce the J21 design. Thus, design work progressed through 1942 and 1943. The final prototype featured a twin-boom wing with a single DB-605B engine, and carried a main armament of one 20 mm cannon along with four 13.2 mm heavy machine guns. The first prototype flew in mid-1943, but was quickly revealed to have inferior performance to the Fw 190, Spitfire and P-51 Mustang. However, 484 aircraft were ordered anyway.

The first of these aircraft, named J21A-1, entered service in 1945 with a total of 54 aircraft built. The J21A-2 was a later version that entered service in 1946-1947, with 66 aircraft built in two batches for a total of 124 aircraft. The J21A-2 featured numerous minor improvements compared to the J21A-1, including the installation of a Swedish 20 mm cannon and better avionics.

The J21A-2 entered service in 1947, but had an extremely short service life. The aircraft's poor performance and relative obsolescence meant that it served for an extremely short time. The 124 aircraft built were quickly replaced by the more modern J29 Tunnan and British de Havilland Vampire, leading to the aircraft’s retirement by 1954. However, it is worth noting that SAAB also experimented with coupling a jet engine to the J21 airframe; this resulted in the A21RB, a unique aircraft coupling the J21's fuselage with a de Havilland Ghost engine. No J21A-2 airframes still exist but three J21A-3 aircraft still exist in museums today.