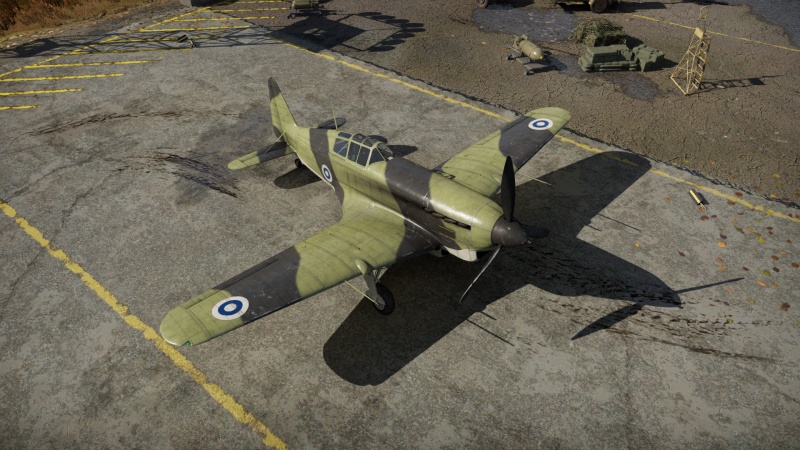 This aircraft is a Finnish modification of the French Morane-Saulnier M.S.406, as shown by the camouflage and markings. The name roughly translates as "Bogeyman-Morane" or "Monster-Morane", reflecting its unusual construction. The main differences between the original M.S.406 and the Mörkö-Morane are the engine and nose-mounted weapon. The M.S.406C1, which is featured in the game, has a Hispano-Suiza 12Y-31 12-cylinder inline engine and a 20 mm Hispano 404 cannon with 60 rounds of ammunition. In contrast, the Finnish Mörkö-Morane has a Soviet Klimov VK-105P 12-cylinder inline engine and a 12.7 mm Berezin UB heavy machine gun with 230 rounds of ammunition. Other airframe improvements include a more aerodynamic engine cowling (the nose is rounded instead of being squared-off like many French aircraft) and a Bf 109-style oil cooler.

The new engine provides the Mörkö-Morane with over 300 more hp than the M.S.406C1, making it an excellent energy fighter. While the armament is rather light, it's adequate for the battle rating. Fans of Finnish aviation and those looking for a low-tier Swedish premium will greatly enjoy this Franken-aircraft.

The Mörkö-Morane has significantly better performance than the original M.S.406, which was historically considered a substandard aircraft. The main improvements result from the new engine. The VK-105P scavenged from crashed Soviet LaGG-3s is not particularly powerful, but it's a huge improvement over the underpowered HS 12Y. When mounted in such a small and light aircraft, the result is like the Yak-3: nice handling and excellent power-to-weight. Amusingly, the VK-105 was heavily based the HS 12Y, which likely made the conversion easier. In a roundabout way, the Soviets fixed a French fighter!

The 527 km/h top speed is comparable to the Hurricane Mk I/L. This is much faster than all biplanes and most early monoplanes, so the Mörkö-Morane will rarely have issues outrunning its opponents. The acceleration and climb rate are incredible at low altitudes. The turning capability is on par with the Yak-1, which means that it can keep up with most enemy fighters in dogfights if uptiered, but low-rank aircraft will often outturn it. If played as an energy fighter, almost no contemporaries can match the Mörkö-Morane.

However, the original M.S.406 airframe was not designed to handle the kind of speeds that the Mörkö-Morane regularly reaches. The turning and roll performance will begin to compress early on, and during extended dives the handling can get quite brick-like. The actual wing rip speed of 756 km/h IAS is high for its rank and will not be a problem, but be sure to manage the airspeed for optimal shooting and manoeuvring.

It should also be noted that the Soviet engine is tuned for low altitude performance. Stay under 3,000 m for optimal speed, climb, and acceleration. Though most early fighters perform poorly at high altitudes anyway, being caught by a MiG-3 at 5,000 m might not end well.

The Mörkö-Morane has no armour protection (armour plates or armoured glass) for the pilot nor the critical components of the aircraft, this is a recurring theme at its BR and on different variations of Morane-Saulnier-designed aircraft. But thanks to the shape and size of the sturdy fuselage the pilot dies rarely from direct hits. Catastrophic fuel tank fires are also semi-rare due to the good positioning of the fuel tank (between the pilot and the engine). Though if the Mörkö-Morane does catch fire it usually breaks the engine or kills the pilot rather quickly.

The single 12.7 mm Berezin UB machine gun firing through the propeller hub is the Mörkö-Morane's primary weapon when stock. While it does not have much burst mass by itself, it works fine against the fragile fighters commonly seen at its rank. The Air targets belt will easily set opponents ablaze and is the best choice overall. The Ground targets belt has powerful cermet-core rounds and might be useful against lightly-armoured vehicles. 230 rounds is a decent supply but still try to conserve your ammunition. When attacking larger aircraft, try to aim for fuel tanks, cockpits, and engines for quick and efficient kills.

A 20 mm MG 151 cannon can be equipped instead of the 12.7 mm MG. The cannon can be loaded with Minengeschoß rounds that are devastating to enemy airframes.

The twin 7.5 mm MAC 1934 machine guns are decent as far as rifle-calibre MGs go, but they play second fiddle to the Berezin UB. They have a high rate of fire and shoot relatively small bullets that tend to spark upon glancing hits. The wing mounting makes convergence an issue and the ammo supply is rather low. Use them at close range and try the Universal or Tracers belts to set your enemies on fire.

The Mörkö-Morane is an excellent fighter in Air Realistic battles, where its flight characteristics and weaponry make it very capable against both biplanes and monoplane fighters. Firstly, the Mörkö-Morane possesses a very good rate of climb. It is able to outclimb every biplane and practically every monoplane plane that it might face; the only exceptions are bombers that receive an air-spawn (such as the Ju 87) and early Bf 109s. Against every other plane, the Mörkö-Morane can have a great altitude advantage and choose exactly when it wants to engage. On that topic, deciding when to attack is a vital skill when flying this plane. Often, attacking bombers isn't worth it, since they can easily do more damage to you than you can do to them. As for fighters, it will very often be the case that if you leave the area for a minute or so, enemy fighters at or above your altitude will dive on your allies lower down. Then, you will have the altitude advantage and a more favourable position.

After the initial dive, it is very important to not engage in an extended turnfight. Against some opponents, this may work in your favour (this vehicle actually has an average turning rate), but most planes are able to outturn the Mörkö Morane in an extended battle. Biplanes especially are incredibly manoeuvrable, and no monoplane should ever attempt to turn with them in a dogfight. Instead, use the speed gained from diving to zoom climb back to altitude; there is no need to throw away the Mörkö-Morane's energy advantage by dogfighting. Instead, continue to boom and zoom the enemy until they are destroyed.

Note: you can't use WEP while using supercharger gear 2

The Soviet invasion of Finland in late 1939 marked the beginning of the Winter War. The Finnish Air Force was under-equipped, only having Bristol Blenheim bombers, Fokker D.XXI monoplanes, and Bristol Bulldog biplanes. New aircraft were needed to better resist the Soviet Air Force, which was much larger in number though largely equipped with older Polikarpov I-15 and I-16 fighters. Finnish units ended up performing excellently with these older aircraft owing to their better tactics, but the Finnish government continued to obtain whatever fighters were available from a wide variety of sources.

30 Morane-Saulnier M.S.406 fighters were delivered by France in February 1940. They likely saw little combat since the Winter War ended a month later. Germany's attack on the Soviet Union restarted combat between Finland and the Soviet Union, and at the start of the Continuation War in June 1941, the Finnish Air Force had a more modern and formidable selection of fighters. Germany delivered additional M.S.406 and M.S.410 fighters from captured French stocks to Finland over the next few years. At this point the M.S.406, already an unimpressive design, was in need of upgrades to better compete with modern Soviet aircraft. Aircraft designer Aarne Lakomaa devised a series of improvements to the M.S.406 using captured Soviet engines, airframe modifications, and improved armament. The result was the Mörkö-Morane, which first flew in early 1943. The performance was far better than the M.S.406 and it was decided to apply this upgrade to all 41 Finnish examples of the French fighter.

However, the conversion process was slow and the first operational example was only delivered in mid 1944. The Continuation War ended shortly afterwards, at which point only 3 were produced. They managed to shoot down 3 Soviet aircraft when piloted by Lars Hattinen in their brief service. After negotiating a peace agreement with the Soviet Union, Finland declared war on Germany in September 1944, beginning the Lapland War. The Mörkö-Moranes were used for ground attack and reconnaissance. After the end of World War 2, the conversions were completed and the Mörkö-Moranes were used as advanced trainers until their retirement in 1952. They were scrapped and none are known to survive today.

There is some debate over the Mörkö-Morane's armament. It is agreed that the initial plan was to arm them with a German MG151/20 cannon firing through the propeller hub. Some sources claim that the Soviet Berezin UB heavy machine gun was mounted instead on several examples since Finland did not have many MG151s in stock. Others claim that multiple armaments were tested, Berezin UB included, but ultimately all operational Mörkö-Moranes were equipped with the MG151/20.