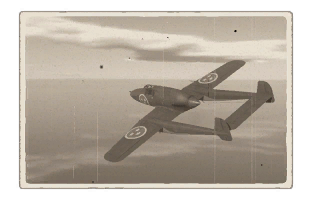 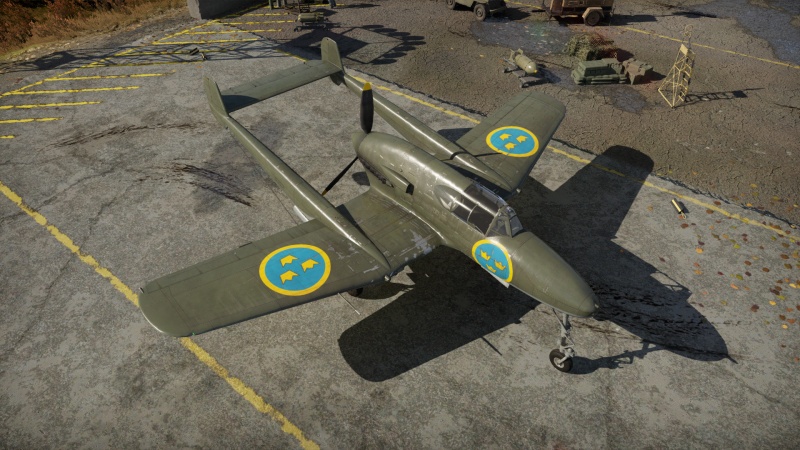 The J21 series is arguably the most iconic propeller-engined aircraft to ever come out of Sweden. For the time, they were underpowered, slow aircraft that were were outclassed by nearly all opponents it could have faced. Its distinctive twin-boom, rear-engined fascia is easy to recognize and its performance is nothing to scoff at either, though the climb rate is poor and the engine overheats quickly when using WEP. The Akan m/39A's are some of the most effective non-cannon aircraft weaponry in the game, boasting superior aspects to even the famed M2 Browning, specifically in terms of raw stopping power and muzzle velocity. The Akan m/41A's are quite powerful as well. The challenge for the pilot is to manoeuvre this aircraft into a solid shooting solution which can be difficult especially against more agile aircraft. Although suffering from a relatively low rip speed, skilled and new pilots can use this somewhat to their advantage, mainly by diving on opponents and climbing again, although this shouldn’t be attempted at extreme speeds.

The automatkanon m/41A is essentially a slower firing Hispano 404 with more ammunition, with all the advantages and disadvantages that come with it. While one might think that the slower firing speed is a disadvantage, it is just high enough to still be effective and is very beneficial for conserving ammunition. It is important to note that when stock, the cannon is very inaccurate and overheats quickly, but becomes quite accurate after modifications.

The complimentary automatkanon m/39A heavy machine guns are, as mentioned previously, arguably the best non-cannon weapons in the game. Their high muzzle velocity, very high fire rate and reasonable accuracy allow them to saturate the sky with lead. The higher calibre of 13.2 mm allows for more stopping power than the typical 12.7 mm and converts them from just being a nuisance to a threat to be heeded. It is interesting to note that due to their HEF-T rounds, they technically fall under the category of "cannon", as normally exploding rounds typically start at 20 mm.

For pilots just beginning to learn this aircraft's flight characteristics, it is best used as a support aircraft, it is too slow to take into dives reliably and suffers from Yak-like rip speeds, without any of the benefits that the Yaks have in agility. For pilots with more experience, you can successfully push this aircraft to its limits and beyond and eliminate lesser experienced pilots in more agile aircraft or even other more experienced pilots through strong counter-manoeuvres.

The SAAB 21 is a twin-boom pusher fighter and attacker designed by the famed Swedish engineer Frid Wänström, who also worked on the SAAB 29 Tunnan, 32 Lansen, 35 Draken and 37 Viggen. In the anticipation and wake of World War 2, Sweden was concerned over its neutrality policy coming under threat by the other European countries, specifically hostile ones such as Nazi Germany. In order to deter belligerent forces and potential aggressors, the Swedish Air Force created a major plan to modernize their fleet, which included the import of foreign models such as the Italian CR.42 and Re.2000 as a stopgap measure.

Meanwhile, Swedish corporation SAAB began studying designs for the possible development of a new, high-performance fighter aircraft. Most of the designs were based around the Bristol Taurus two-row 14 cylinder radial engine developing around 1,000~1,100 horsepower. The most promising design was a twin-boom pusher layout and made use of many new features unfamiliar to the SAAB technicians and engineers at the time, but was able to compete with the other fighter aircraft at the time while also maintaining several advantages such as a heavy amount of nose-mounted armament and superior pilot visibility, along with ease of maintenance. The design was kept dormant until 41, as Sweden was beginning to see that it would not be able to procure improved foreign models as a result of the war, they started another rearmament program to adopt advanced indigenous fighter aircraft.

Accordingly, SAAB blew the dust off of their old twin-boom design and set to work. Earlier on, it was decided to replace the Bristol Taurus with an American Pratt-&-Whitney Twin Wasp, but this was changed when the engine manufacturer Svenska was requested to provide an alternative engine, which was difficult due to the time constraints. Thus, they decided that a licensed engine would be the best course of action. The legendary German Daimler-Benz DB 605 that powered many famous designs was chosen and modified to fit Swedish needs. Three prototypes were completed and its maiden flight was completed in 1942.

In 1941, Sweden started a domestic rearmament program in order to bolster the strength of its armed forces in an effort to ensure its neutrality during the ongoing war. Among the branches intended for reinforcement was the Swedish Air Force, which up until this point had mainly been operating foreign, partially outdated aircraft.

The SAAB company had already been working on a design study for a modern fighter aircraft since the early 1940s. Their project had a rather unorthodox design - a single-engine, twin-boom aircraft in a pusher configuration. With the arrival of the 1941 rearmament program, sparking a great interest for domestic aircraft production, SAAB began working on refining their design for mass production.

Due to the J21’s introduction to service coinciding with the dawn of the jet age, the type didn’t remain in active service for too long. In fact, the J21 was retired in 1954 - some ten years after its initial introduction - and its only operator remains the Swedish Air Force.

Aircraft of comparable role and configuration