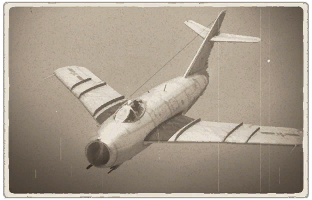 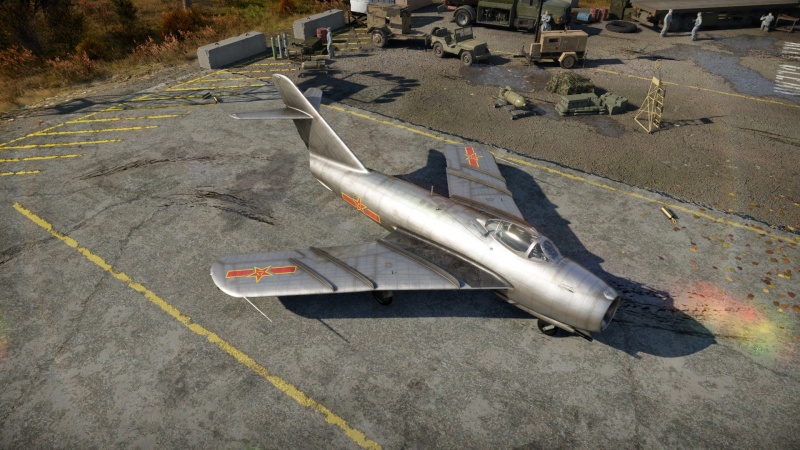 The J-4 is a rank V Chinese jet fighter with a battle rating of 9.0 (AB/RB/SB). It was introduced in Update 1.91 "Night Vision". It is a Chinese version of the MiG-17 and performs identically to it.

The J-4 can be outfitted with the following ordnance:

The newly gained top speed performance and manoeuvrability come at a hefty price. Turn rate and low speed flexibility are reduced, due the stronger swept wing design and weight gain.

As some positive characteristics traits of the MiG-15 vanish, some negative aspects also vanish. The newly designed tail enables far better control close to Mach 0.8 (it still lacks a flying tail though) and the roll rate also significantly improved. Manual limitation set the airframe at positive 8G, with the increased control the likelihood of over stressing your airframe is easy and a steady hand required in evasive manoeuvres.

The MiG-17 was purchased and used by the PLAAF during the early Cold War era. It saw service alongside the MiG-15 during the Second Taiwan Strait Crisis, fighting against the ROCAF's F-86 Sabres. The two air forces were matched fairly evenly in terms of aircraft, perhaps with performance advantage going to the MiG-17s over the Sabres, but during the course of the conflict the Sabres were upgraded to use the AIM-9 Sidewinder air-to-air missile. This new weapon was used successfully to shoot down numerous Communist aircraft, starting its first combat experience on a good note. However, in late September 1958, a dud Sidewinder lodged itself in a MiG-17, which returned to base. The missile was successfully removed and eventually sent to the Soviet Union for reverse engineering. The result of this would be the very similar Vympel K-13 missile, entering service as the R-3S in 1962. The PLAAF would also license produce the K-13 as the PL-2 some years later, bringing the Sidewinder into service on the other side of the Taiwan Strait.

Information is sparse on the fate of the MiG-17 afterwards. They were most likely supplanted by the domestically produced Shenyang J-5 version and eventually phased out of service upon the introduction of sufficient quantities of the superior MiG-19/J-6 and J-7.