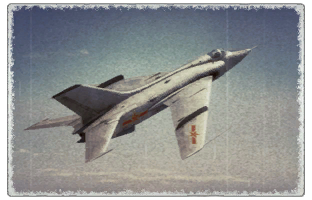 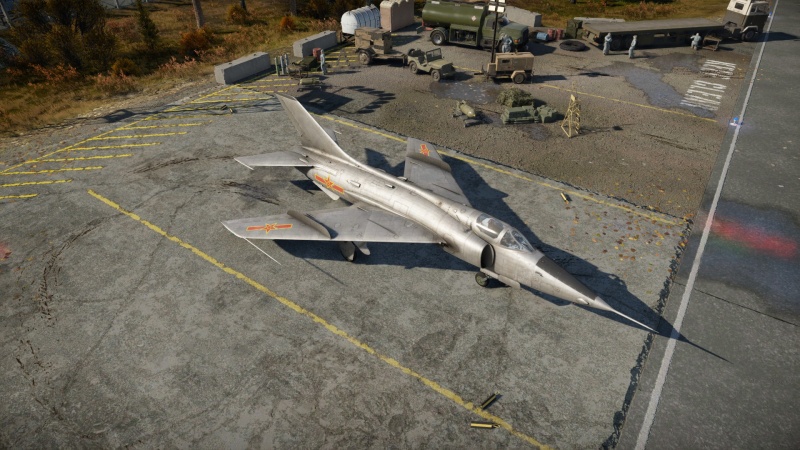 A development of the J-6/MiG-19, the Nanchang Q-5 is the first jet aircraft in the Chinese tech tree of indigenous design. Its wings and rear fuselage still closely resemble the MiG-19 but the new forward fuselage with side-mounted air intakes and a pointed nose give it a distinctive sleek appearance. Designed as an attacker, this early version of the Q-5 has better ground attack ordnance than the J-6A with access to 90 mm rocket pods and up to four 250 kg bombs. It also works well in the air-to-air role, having toned-down flight characteristics and armament compared to the J-6A at a lower battle rating in Realistic Battles. The Q-5 is not the most beginner friendly of aircraft but skilled pilots can still enjoy this iconic piece of Chinese aviation history.

Despite weighing about 10% more than the J-6A when empty, the Q-5 early still feels similar in terms of general flight performance. Acceleration, climb, and turning capability are good for its battle rating and the Q-5 can match or exceed late subsonic and early supersonic aircraft. It can reach about 1210 km/h at sea level thanks to its cleaner aerodynamic design, which actually compares very well to the J-6A, but it is noticeably slower than the J-6A at higher altitudes. It compresses more in dives, has somewhat worse low speed handling, and does not carry as much fuel. Anyone used to flying the J-6A or MiG-19PT will have few issues transitioning to the Q-5 and similar tactics can be used.

The Q-5 protects the pilot from small arms fire and machine guns, but at a battle rating of 9.7, this level of protection does not amount to much. Enemy cannons and missiles will make short work of the Q-5 so avoiding incoming fire is paramount. The twin engines are likely to be damaged by attacks from the rear, but having two of them offers some extra survivability since it is capable of flying back to base on one engine. The elevators also have separate damage models and the aircraft remains somewhat controllable if one of them is blown off.

The Q-5 early is armed with:

The original 30 mm Type 30/NR-30 cannons, known for their fearsome firepower, have been replaced with 23 mm cannons identical to the NR-23 cannons found on earlier Soviet jets like the J-4/MiG-17. These are significantly less powerful due to their lower explosive content, rate of fire, kinetic damage, and muzzle velocity. They typically require a solid burst of hits to destroy a target instead of dismembering enemy fighters with a brief touch. On the bright side, they have more ammunition with about 8 seconds of firing time and the Q-5 early's opponents tend to be slower than the J-6A's. Lead generously and try to get close to your opponent before unloading. Using them against ground targets should not be a priority since their penetration is no higher than a heavy machine gun and the ammo supply is not plentiful, all things considered.

The default belt has an even mix of FI-T and AP-I rounds and should be satisfactory from the start. Gun convergence is not a major issue since the cannons are mounted close to the centerline of the aircraft in the wing roots, and is up to personal preference.

The Q-5 early can be outfitted with the following ordnance:

The Q-5 early's suspended armaments are an improvement over the J-6A, but nothing spectacular. It can carry four 250 kg bombs, two mounted on fuselage hardpoints and two mounted in the internal bomb bay. These are small for the Q-5's battle rating and four of them is not enough to destroy a single base. In mixed battles, they require more precision against ground targets than the typical 1000 lb/500 kg bombs used for CAS.

In addition to the bombs, it can carry a pair of 90 mm rocket pods with seven rockets each. The Type 90-1 rockets are better than the anemic S-5 rockets used by typical Soviet jets and can penetrate 280 mm of armour with 1.03 kg of TNT equivalent, but their capacity is very limited; the contemporary F-100D can carry up to 76 comparable FFAR Mighty Mouse rockets.

The Q-5 early can be used similarly to the MiG-19 or J-6A. As discussed, it has inferior performance and armament but tends to face easier opposition.

Although it was historically an attack aircraft, the Q-5 is not a first-rate ground attacker in Air RB since its ordnance is rather anemic compared to other jets at its battle rating. It cannot destroy a base with its four 250 kg bombs, but this is still an option for supplementary research points when grinding: stay at low altitude, loop around to a side base, drop the bombs, then head towards the center of the map to join the furball. Going after AI ground vehicles with the bombs and rockets can also be successful provided that other jets do not arrive quickly to crash the party.

When fighting subsonic aircraft, try to enter engagements with a speed advantage. The Q-5 accelerates well and has a high top speed at sea level, so it's not difficult to make a pass and escape afterwards while dodging some fire. If an enemy is catching up to you or is getting too close for comfort, pull them into a climbing spiral or other vertical maneuvers; the Q-5 has enough of the MiG-19's climb and thrust-to-weight to energy fight in a similar manner and a stalled-out target is easier to gun down. Against supersonic aircraft, the Q-5's speed advantage is lessened and it needs to utilize its turn rate and acceleration more. In a full uptier, the Q-5 does not have many options against Mach-2 capable jets with radar-guided missiles. Stay at lower altitudes and pick off distracted opponents opportunistically.

The lack of missiles is a significant drawback since the Q-5 has a difficult time forcing escaping enemies to dodge or shooting down stall-climbing opponents. It also has no countermeasures, so if a Harrier GR.1 with SRAAMs manages to get close on the Q-5's tail, the situation is unlikely to end well. The main selling point of this aircraft is its performance as opposed to its weapons or defenses; good situational awareness and judgement are necessary to make the most out of it.

Remember to take more than the minimum fuel. The Q-5 early has a limited fuel capacity since the internal bomb bay occupies space otherwise reserved for fuel tanks and the twin engines are very thirsty on afterburner.

As a 9.7 aircraft, the Q-5 early can be used in a lineup with the ZTZ96A. It has a harder time destroying enemy tanks than the F-100A's Bullpups or large bombs, but the ability to carry both bombs and rockets in the same loadout can be entertaining and the Q-5 performs well in low-altitude dogfights.

The Type 90-1 rockets can penetrate most targets not equipped with composite armour or ERA. Against protected targets, attacks should be made to the roof, side, or rear. Try using them against soft targets like light tanks and SPAAs that can be hull-broken. The main drawback to these rockets is their low capacity. Do not expect to score more than one kill or assist unless your aim is exceptional.

The 250 kg bombs, which are dropped individually, do not have much explosive content and need to be delivered with decent accuracy in order to score kills. This can be a tall order for a supersonic jet aircraft like the Q-5, especially against moving targets, so consider dropping several (or even all of them) at once. Carpet bombing a capture point or lane can lead to decent results. A relatively short fuse can be used due to the bombs' limited blast radius. Manually open the bomb bay door prior to dropping the second pair of bombs for minimal drop delay and better accuracy.

After using up the ordnance, which can be done in just one or two passes, the Q-5 can switch into an air superiority role. It can out-accelerate and outmanoeuvre most contemporary fighters and the Ground RB environment makes advantages in top speed or radar-guided missiles less significant.

Be wary of enemy SPAA while ground attacking or dogfighting. The Q-5 early lacks a radar warning receiver and anti-aircraft cannons or missiles can open fire suddenly. Do not head-on or stall out in full view of an SPAA, and even when the coast appears to be clear, avoid flying in straight lines. 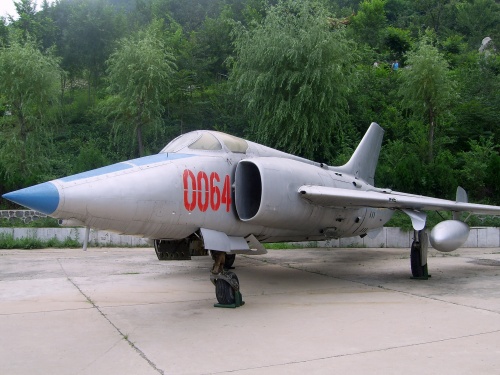 The Nanchang Q-5 'Fantan' is a Chinese land-based fighter-bomber, close support aircraft and nuclear strike aircraft. Developed in the early 1950s as a replacement for the ageing Soviet-made IL-10 attack aircraft, the plane was developed from the MiG-19 airframe. Though it entered service relatively late due to the effects of the Cultural Revolution, it still saw extensive service as the primary attack aircraft of the Chinese Air Force. As well, it was exported to several countries including Pakistan, Bangladesh and Myanmar. Though it has now been retired from active Chinese service, the aircraft remains in service with the Myanmar Air Force.[1][2]

In the early 1950s, China lacked and needed a new ground attack aircraft. While other nations were re-equipping with advanced attack aircraft such as the A-4 Skyhawk and F-100 Super Sabre, the Chinese Air Force still used the obsolete propeller-powered IL-10, a relic of the Second World War. As a result, the Chinese Air Force started studying concepts for a new supersonic jet-powered attack aircraft. However, the state of Chinese aircraft technology was far behind other nations, and as a result, existing designs were studied; these included the Soviet Su-7 and MiG-19, which was already in service as the Shenyang J-6.[2] As a result, the final design was based on the MiG-19, and shared many of its characteristics.

The Q-5 shared the MiG-19's aft section and engines, but had a completely redesigned forward section making it 25% longer.[2] As a result, the aircraft had a significantly reduced top speed, though it was still capable of flying supersonic. The nose was redesigned and featured the air intakes on the sides, behind the cockpit, while the cockpit canopy was adjusted as well. The armament was changed to two 23-mm cannons in place of the MiG-19's NR-30s.[2]

The Q-5's construction was delayed due to the effects of the Great Leap Forward and the Cultural Revolution. Thus, the first Q-5 prototype flew on June 4th, 1965.[2]

The Early Q-5 was first introduced into the People's Liberation Army Air Force (PLAAF) in the late 1960s. It served as the primary ground attack aircraft of the Air Force for several years, before being superseded by later variants of the aircraft including the Q-5A. As such, it was used merely as a stopgap measure until the improved Q-5 variants were introduced. None are still in service, though late-variant Q-5s are still in service with the Myanmar Air Force.[1]

Having started production of the Shenyang J-6 - the Chinese version of the Soviet MiG-19 - in 1958, the PLA issued an order to develop a ground attack version of the aircraft in August of the same year. By 1960, design work on the aircraft had concluded, but political turmoil in the country at the time caused prototype construction and further development to be delayed until the mid 1960's.

In June 1965, the prototype of the aircraft that would become known as the Nanchang Q-5, first took to the skies for its maiden flight. Following further testing, the decision to put the aircraft into production was made in 1969, while first deliveries began being made in 1970.

The Q-5 officially entered service with the Chinese Air Force in 1970. Around 100 aircraft of the early versions were built out of a total of around 1,300 aircraft of all variants. However, later models continued service with Chinese forces well into the 2000's. Apart from the PLA, the Q-5 also saw service with Bangladesh, Pakistan, Myanmar, North Korea and Sudan.