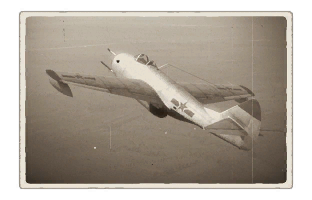 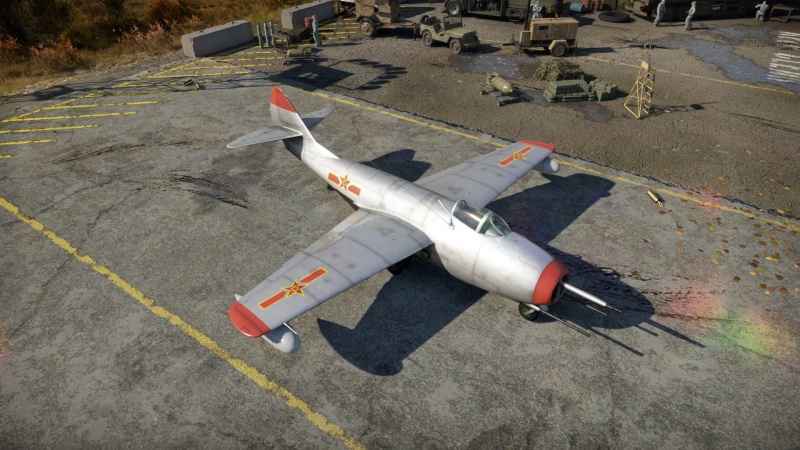 As such, this fighter was built almost like a rocket, needing to get to bomber altitude as fast as possible and intercept inbound bombers. The limited ammunition prevents the pilot from just spraying-and-praying, but instead requires trigger control to maximize rounds on target. This is especially important in realistic and simulator battles where after the ammunition is expended, the pilot must return to base to reload.

The MiG-9, unfortunately, is not built like a tank and as a bomber interceptor, it had to be constructed like one, sacrificing armour for speed. The aircraft does feature 55 mm of bulletproof glass on the canopy windscreen and two 12 mm steel plates on both sides of the 37 mm ammunition magazine, but that is it for aircraft protection. All the protection is in the front which is meant to offer defence from any defensive gunners on enemy bombers. From the front profile, the armour plates and glass do a good job of shielding the critical components, however, from just about any other angle, the pilot, engines and fuel tanks are clustered in the centre of the aircraft and are all vulnerable from machine gun, cannon, missile and rocket damage. The MiG-9 (l) does have a little more of a weight issue that the standard MiG-9 in that it has fuel pods at the end of the wing-tips which both add more weight and slightly decrease manoeuvrability.

Having the 37 mm and 23 mm cannons helped ensure if the critical areas are hit, only one pass is needed. Without rockets or missiles to provide backup or alternative weapon options, proficiency with the cannons is a must. The "Air targets" ammunition belt provides provide a large amount of HE ammunition, which will critically damage enemy targets, even without a precise hit.

The MiG-9 (l) requires altitude to be most effective in either of its two main roles. While flying full throttle into the middle of the map may seem like the noblest thing to do, it may end your piloting career faster than you care for, not allowing you to reach your full potential during the match. Best bet for this fighter is to start side climbing on the map or working on gaining altitude away from where the main group of aircraft are flying as this provides you with a relatively safe area to climb and allows you to see any enemy aircraft which may be gunning for you and give you enough time to respond or dive away. It is important to begin your side climb flying straight until the fighter reaches speeds of about 500-550 km/h when the climb angle can be increased to about 15°.

If there are no bombers to attack, either because they have all been destroyed or waiting for more to spawn (in Arcade battles, some pilots tend to leave their attackers/bombers as late match reserves), then when at altitude, you can patrol and look for unsuspecting fighters or you can work to lure aircraft up into a stall fight. From your perch, you can start to dip down towards a fighter as if you are going to pounce on it, if they take the bait and climb to meet your MiG-9 (l), then pull up as if you chickened-out and are running, begin a moderate climb with your speed and watch as they follow up, especially watch for the condensation trails coming from their wings, this is a good indication that they are beginning to stall and are an easy target. The MiG-9 (l) has a rather larger rudder and can make use of it for a wing-over manoeuvre which will put you in line with the stalled out target allowing for you to get a quick shot off before returning to your patrol altitude. It is recommended to take 20 minutes of fuel; even though it greatly reduces performance at the start of the match, it allows for you to freely use 108% as well as having a much longer-lasting presence over the battle.

Main article: History of the MiG-9

The Korean War saw the very first major battle between the East and the West as well as between jet fighters. Mainland China was involved in the 3-year conflict against the UN forces. One major problem for the newly-born PLAAF was that they had no jet aircraft. During the mid-1950, the Nationalist forces and the USAF would often perform air raids to major cities like Shanghai, Guangzhou and the new capital of Beijing. Between August 1950 to January 1951, the Soviet Air Force transferred 13 fighter divisions to defend these cities, with 9 of them equipped with MiG-9s. This was the very first time Mainland China got their hands on jets and later they decided to purchase some MiG-9s from the Soviets as well, both the PLAAF and the Soviet Air Force expected the MiG-9 to be sufficient enough to handle USAF jet fighters.

Later from April till June 1951, the PLAAF received 358 out of the total of 369 MiG-9s in their service, where the Soviet Air Force transferred them straight to the PLAAF at Mainland's airfields, while there were some MiG-15 fighters that came into service in PLAAF, most of the new divisions of the PLAAF had only MiG-9s on their hands. While they were handy and sufficient to shoot down propellers, MiG-9s were inferior to the late F-84 used by the USAF, let alone the later F-86 Sabre. Thus in mid-1951, the Soviet Union decided to replace all the MiG-9s in service of 6 fighter divisions with MiG-15. Although the MiG-9s had very little contributions to the war due to their performance, the PLAAF saw it as a trainer to train propeller pilots into jet pilots, and they were mostly used as a jet trainer for new units before MiG-15s were delivered.

MiG-9s remained in PLAAF service till 1959 after its decommission order was effective since 3 November 1956 and 2 examples of this aircraft remain till today in different places in Beijing.