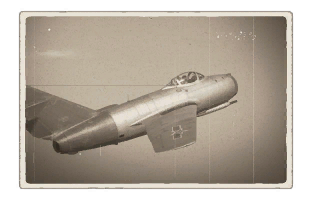 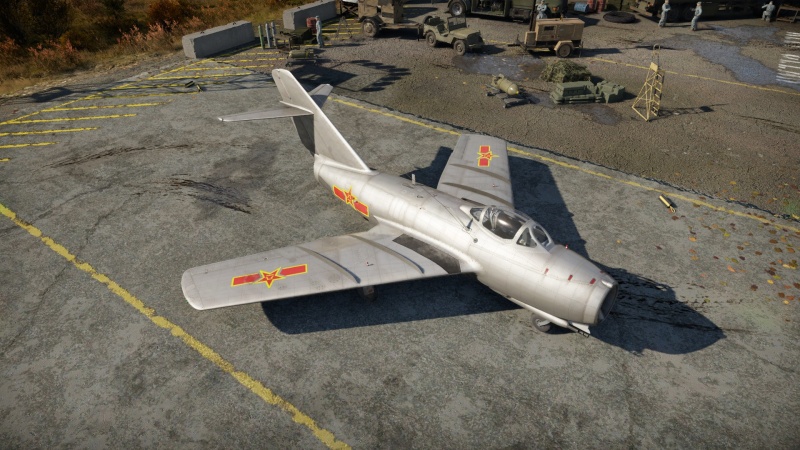 The J-2 is a rank V Chinese jet fighter with a battle rating of 8.7 (AB/RB/SB). It was introduced in Update 1.91 "Night Vision". It is a Chinese MiG-15bis and performs identically to it.

The J-2 can be outfitted with the following ordnance:

At higher ranks of the Chinese aviation line is the J-2, a Chinese MiG-15bis. It one of the most iconic jet fighter aircraft designs from after the Second World War. Earning its reputation on fame over the skies of Korea against its US contemporary, the F-86 Sabre.

The J-2 features a powerful cannon arrangement of 2 x 23 mm and 1x 37 mm, excellent high altitude performance and is highly effective in vertical manoeuvres. Unlike the MiG-9 that comes before it, the J-2 is also the first jet aircraft in the Chinese tree to feature an air brake which is extremely useful in combat situations. The jet fighter does have its downsides. The lack of an "all-flying tailplane" (such as that featured on the Sabre) leads to less control over the aircraft at higher speeds approaching 1,000 km/h. While the J-2 is initially faster in acceleration by comparison to the Sabre, this does mean that once both aircraft are up at higher speeds, the Sabre will hold some advantages over the J-2. It should be noted that if you load 8 minutes of fuel instead of the regular (for most pilots) 20, it drastically improves your performance. However, this is not recommended to be done at the beginning of the match as most matches last longer than 8 minutes, and should instead be done when you land mid-match.

The combination of 37 mm and 23 mm cannons creates aiming issues for pilots not familiar with their ballistic properties or velocity. Due to the size of these cannons, ammunition pools are restricted by comparison to other top tier jet aircraft. To help compensate the two different trajectories of the armament, it is recommended to use 'rolling' manoeuvres, as the rudder may lock in high speeds. To aim with these cannons, it is best to estimate the lead with the experience built up with planes beforehand (eg. La-9) and add extra distance over the estimated lead (about double from the estimated).

Once pilots have learned to use the J-2's excellent rate of climb, acceleration and high altitude capabilities to their advantage, the downsides of the aircraft are far less significant than the positives. In the right hands, the J-2 can be a devastating combatant, capable of dealing with any aircraft in-game swiftly. Teamwork, squads, and communication will also be beneficial when flying the J-2 as effective coordination between multiple pilots allow you to use this aircraft to its maximum potential. After mastering the J-2, you can research its improved variant, the J-4 (a license-built MiG-17). The J-2 shares much of its performance abilities and deficiencies.

The People's Republic of China received the first batch of MiG-15bis jet fighters in late 1952, only 6 months before the end of Korean War. A total of about 1,500 MiG-15bis were aided to China during 1952-1955 and a few of these aircraft took part in the Korean War. 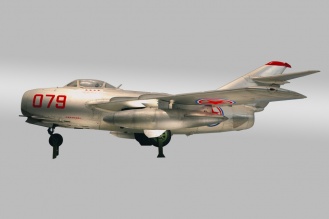 Wang Hai's MiG-15, with 9 claimed victories over US fighter jets.

According to the Agreement on the Union of Soviet Socialist Republics to grant the People's Republic of China technical assistance in organizing the repair of aircraft and the engines and the organization of aircraft factories signed in October of 1951, the MiG-15bis was chosen to be China's first license-produced fighter jet. The Factory No. 112 (later Shenyang Aircraft Corporation) would produce the airframe while the Shenyang Engine Overhaul Factory (later Shenyang Liming Motor Company) would produce the WP-5 turbojet engine ("渦噴-5", domestic license-built VK-1 engine). Both factories received guidance and instructions from Soviet experts.

However, the two factories would not be ready for mass production until 1955 when the more advanced MiG-17F fighter jets were already in active service. The MiG-15bis was becoming outdated, and therefore there was no need to build MiG-15bis fighter jets and the PRC started to produce the J-5 (license-built MiG-17F) in Shenyang instead, though it is sometimes claimed that trial production of the J-2 had commenced before the switch to J-5 production. MiG-15bis damaged in air battles of the Korean War were sent to Factory 112 for repair and overhaul. Overhauled aircraft using parts and avionics of MiG-17F/J-5 were unofficially called J-2 ("殲-2", which never become official name of the hybrid fighters). The MiG-15bis/J-2 served in PLAAF until late 1970s.

Although the single-seated MiG-15bis never saw domestic production, the two-seated trainer version, the UTI-MiG-15, was license-built under the name of JJ-2 ("殲教-2", Pursuit Aircraft Trainer-2), some of these trainers were exported to other countries operating MiG-15/17s, such as North Korea, Sudan and Tanzania as FT-2 (Fighter Trainer-2).