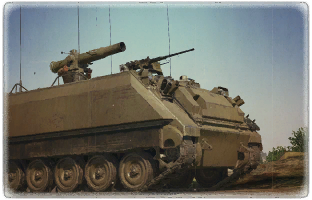 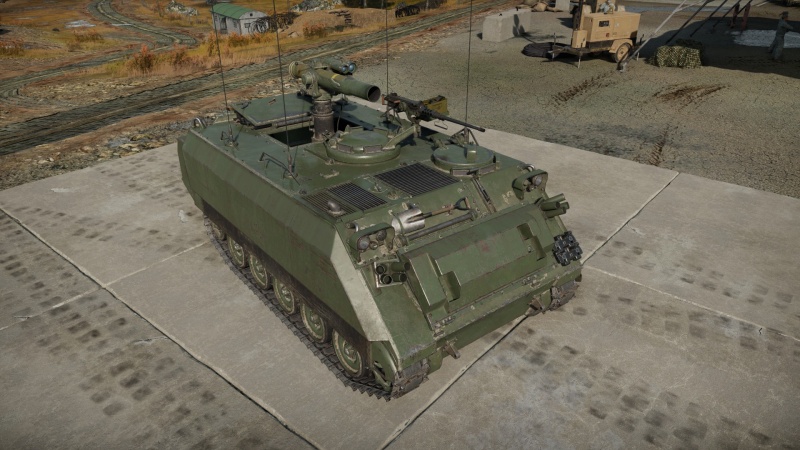 The CM25 is a rank VI Chinese tank destroyer with a battle rating of 8.3 (AB/RB/SB). It was introduced in Update "Raining Fire".

The vehicle profile is a basic rectangle with a slightly sloped front which increases protection from machine gun fire. The front has a hatch, which works as a HESH screen. The main areas of the vehicle to target when attacking is the missile launcher and machine gun to disable its attack capability, or the main vehicle shot to disable it completely.

The CM25 is meant to be a stand-off vehicle due to its role on the battlefield and is not built to be on the front line. Even with the add-on armour, compared to the previous M113A1, the aluminium alloy armour will not stand up to much and will barely stop 12.7 mm machine gun fire when angled or far away. Anything of higher calibre is almost guaranteed to penetrate.

The gunner is exposed outside of the vehicle when directing the launcher and can be hit. Be aware, as the launcher's base, and sometimes even the rangefinder located next to the launcher, can trigger APHE fuse and cause it to explode in front of the gunner's face, the shrapnel then flying back and shredding the virtually nonexistent roof armour, taking out everyone in the middle of the vehicle. Also, since the gunner stands within the opened roof hatch, if a chemical warhead hits the rangefinder, then the payload can enter the vehicle through it and take out the loader as well.

Since the vehicle's armour is very thin, it sometimes does not detonate shells so armour-piercing shells cause less than fatal damage. However, only very high calibre shells with fuses of about 20-22 mm won't detonate, which are very rare at the battle rating, as most shells use 15 mm fuses at this point. The main key here is to avoid being hit at all as if your tank is angled during an attack, the fuses would detonate anyway. The shield on the front can stop HESH from doing any damage at all, but it's not very reliable.

The placement of the weapon is high enough to fire over cover, however, advantages also at times spawn disadvantages and in this case, with the vehicle gunner standing tall outside of the vehicle, he has no protection and can easily be hit, despite the rest of vehicle being concealed.

The launcher has a rather limited arc of fire - 45 degrees in either direction, which isn't compensated by missile's characteristics like in the case of Swingfire or armour like in the case of IT-1. If you want to fire over cover, the best bet is to stay far away from the enemy and cover, or right in front of the cover, however, this still probably won't protect the gunner. The gun depression, at 20 degrees, excels almost every other tank and allows the player to use many surprising positions to attack. Note that the depression is far less when the launch tube is positioned above the machine gun. 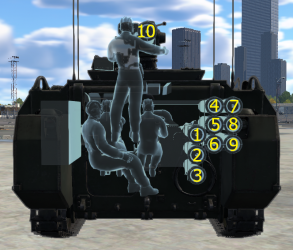 Ammo racks of the CM25

The single 12.7 mm machine gun can be effective when fighting against open-topped or lightly armoured vehicles (eg AUBL/74, Gepard) or to cause some confusion/distraction to the enemy vehicles as the CM25 reloads.

At this battle rating, this vehicle is limited to keeping helicopters from getting too comfy, since they too have thin to no armour, other aircraft should be left to the designated anti-air vehicles. As a last resort, the ATGM can be used.

The best way one should use this vehicle would be to stay away from the active combat areas, hide, and use the exposed gunner and TOW launcher to your advantage. The exposed launcher allows the vehicle to hide behind solid cover while still being able to fire from over it, giving the enemy a much harder time in spotting and shooting you. Staying away from the combat zones maximises your survivability, in addition to taking advantage of the TOW missiles' extremely long-range, allowing you to pick off targets from beyond the range of conventional rounds.

It is also worth noting the -20 degrees launcher depression as, even though it may not be as impressive as the -30 degrees launcher depression of the M901, it is still very capable of adapting to uneven terrain and firing from behind hills. However, note that the depression angles are severely limited when the launcher is facing the pintle-mounted machine gun, to roughly only -3 degrees. Therefore, you should try to always have the front of the hull facing the direction of the battlefield, to avoid the launcher suddenly jerking up when the machine gun gets into the way, which will also guide the missile upwards (if launched), and therefore miss the target. Horizontal guidance is also limited, and the launcher will stop rotating at ±45 degrees. The best way to counter this drawback will be to play it like other turret-less tank destroyers, like the ISU-122 and the ISU-152, which must rotate the hull to assist with aiming at extreme angles.

Even though the CM25 is mounted with a heavy machine gun, attempting to combat helicopters and planes is not recommended unless the situation is desperate, as doing so will only grab unwanted attention from both the air and ground. Aircraft at this rank are often equipped with HE rockets, only one of which is necessary to destroy your vehicle thanks to the overpressure mechanic, and if not, the vast majority of aircraft-mounted guns will be able to penetrate from any angle.

If you find yourself in a close-quarters situation, the best method of survival will be to use the machine gun to cause some levels of distraction, while attempting to retreat to the nearest cover. Do note that your machine gun does have a relatively impressive penetration of 31 mm at close range, which can allow you to take out lightly armoured targets like the M3 Bradley (in the turret with some luck), AUBL/74, Falcon etc., yet should still be avoided if possible due to these vehicles possessing much better close-quarters capabilities and will have no problem in shredding the CM25.

During the heat of the Vietnam War, Taiwan was one of the major bases for US operations against the North Vietnamese forces; while the M113 APC was an iconic vehicle in the war, it also suffered from heavy losses to the Viet Cong. As such, the US signed an agreement with the Taiwanese government in 1967 to refurbish and repair M113s that were recovered by US forces under the "Third-Nation Overhaul Program" (第三國翻修計劃).

At the time, the Nationalist forces had never built any form of armoured vehicles from scratch, only a few vehicles that were rebuilt from existing parts of US aid vehicles, so the overhaul program was a good chance for the Nationalist forces to learn the flow of APC manufacture and methods to repair M113s. In 1975, after the war was ended with the victory of the Northern forces, the Combined Service Forces (聯合勤務總司令部 or 聯勤 for short) started "Project Wancheng" (萬乘計劃, 萬乘 lit. 10 thousand vehicles) for domestic versions of M113, coded Wancheng 1 to 3; from mortar vehicles to MLRS and even projected to install spare M24 Chaffee turrets onto the chassis of M113. These vehicles, built and assembled by Taiwan Aluminum Corporation (台鋁公司, now China Steel Aluminum Corporation 中鋼鋁業), became the basis of what would be CM21 APC for the Republic of China Army.

The major difference of the later versions CM21 APC to the original M113A1 is additional armour plates on around the hull, which are filled with polyurethane chemicals to absorb bullet up to 5.56 mm NATO rounds; while it might be a little more protected than M113A1, this also cost some of its mobility due to the weight added from such armour plates.

CM25 is one of the five major variants of the CM21 APC, armed with US-made BGM-71 TOW missiles, the polyurethane forms were also replaced by polystyrene for the amphibious needs of the ROCMC; these around 30 vehicles became heavy weaponry exclusively for the Marine Corps anti-tank companies, serving as their mobile AT platform along with its American cousin M113A1 (TOW) in view of possible Mainland China landing operations.

Since the 1960's, the armed forces in Taiwan have operated with a large fleet of American-made M113 APCs spanning several variants. Thoroughly pleased with the vehicle's performance and reliability, Taiwan decided to develop its own APC, inspired by the proven M113's design.

In 1987, the basic CM21 design was modified to allow the vehicle to conduct anti-tank duties, similar to the M113A1 TOW already in service at the time. In a similar manner as the M113, the vehicle was fitted with a single TOW launcher and received the new designation CM25.

By 2019, all M113A1 APCs among the ranks of the Taiwanese armed forces were replaced by newer vehicles. However, the CM21 series of APCs, including the CM25, continue serving in the present.