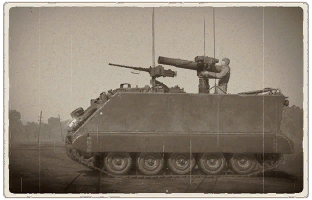 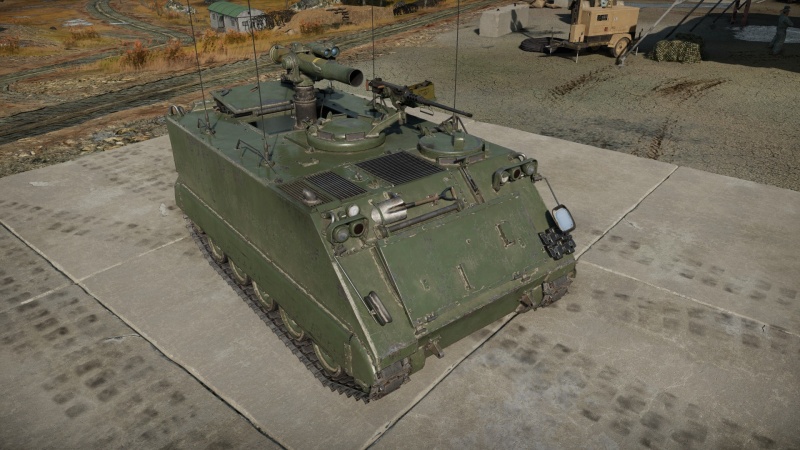 The ␗M113A1 TOW is a rank V Chinese tank destroyer with a battle rating of 8.0 (AB/RB/SB). It was introduced in Update 1.91 "Night Vision". It is a M113 Armoured Personnel Carrier with a TOW missile launcher equipped on the back of the vehicle.

The M113A1 is meant to be a stand-off vehicle due to its role on the battlefield, and is not built to be on the front line. The aluminium alloy armour will not stand up to much and as is will barely stop 12 mm machine gun fire when angled or far away. Anything of higher calibre is almost guaranteed to penetrate.

The gunner is exposed outside of the vehicle when directing the launcher and can be hit. Be aware, as the launcher's base and sometimes even the rangefinder, located next to the launcher, can trigger APHE fuse and cause it to explode in front of gunner's face, then the shrapnel flies back and shreds the virtually nonexistant roof armour, taking out everyone in the middle of the vehicle. Also, since the gunner stands within the opened roof hatch, if a chemical warhead hits rangefinder, then payload can enter vehicle through it and take out loader as well.

The M113A1 (TOW) (China) is a specialized vehicle which has a TOW missile launcher mounted onto the top of the vehicle. Ten missiles are onboard and can be fired before it needs to reload or resupply.

Anti-tank guided missiles (ATGM) loaded in TOW launcher have two purposes: be extremely fast and attack at range across the battlefield, much like artillery cannons. As such, of all ATGMs at its battle rating, the M113A1 (TOW) (China) is probably one of the fastest with both launch and a top speed of 300 m/s. Be aware, this vehicle can easily be beaten by hybrid tank ATGMs, however, they're typically found at battle rating 9.0, aside from US light tank M551 and Soviet medium tank T-55AM-1, which is also a premium vehicle.

The launcher has a rather limited arc of fire - 45 degrees in either direction, which isn't compensated by missile's characteristics like in case of Swingfire or armour like in case of IT-1. If you want to fire over cover best bet is to stand far away from the enemy and cover, or right in front of the cover, however, this still probably won't protect the gunner.

The gun depression, at 20 degrees, excels almost every other tank and allows the player to use many surprising positions to attack. Note that the depression is far less when the launch tube is above the MG. 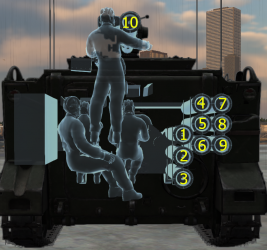 The best way one should use this vehicle would be to stay away from the active combat areas, hide, and use the exposed gunner and TOW launcher to your advantage. The exposed launcher allows the vehicle to hide behind solid cover while still being able to fire from over it, giving the enemy a much harder time in spotting and shooting you. Staying away from the combat zones maximises your survivability, in addition to taking advantage of the TOW missiles' extremely long range, allowing you to pick off targets from beyond the range of conventional rounds.

It is also worth noting the -20 degrees launcher depression as, even though it may not be as impressive as the -30 degrees launcher depression of the M901, it is still very capable in adapting to uneven terrain and firing from behind hills. However, note that the depression angles are severely limited when the launcher is facing the pintle-mounted machine gun, to roughly only -3 degrees. Therefore, you should try to always have the front of the hull facing the direction of the battlefield, to avoid the launcher suddenly jerking up when the machine gun gets into the way, which will also guide the missile upwards (if launched), and therefore miss the target. Horizontal guidance is also limited, and the launcher will stop rotating at ±45 degrees. The best way to counter this drawback will be to play it like other turret-less tank destroyers, like the ISU-122 and the ISU-152, which must rotate the hull to assist with aiming at extreme angles.

Even though the M113 is mounted with a heavy machine gun, attempting to combat helicopters and planes is not recommended unless the situation is desperate, as doing so will only grab unwanted attention from both the air and ground. Aircraft at this rank are often equipped with HE rockets, only one of which is necessary to destroy your vehicle thanks to the hull-break mechanic, and if not, the vast majority of aircraft-mounted guns will be able to penetrate from any angle.

If you find yourself in a close quarters situation, the best method of survival will be to use the machine gun to cause some levels of distraction, while attempting to retreat to the nearest cover. Do note that your machine gun does have a relatively impressive penetration of 31 mm at close range, which can allow you to take out lightly armoured targets like the M3 Bradley (in the turret with some luck), AUBL/74, Falcon etc., yet should still be avoided if possible due to these vehicles possessing much better close quarters capabilities and will have no problem in shredding the M113.

When moving to a shooting position, the last thing you should ever do is stop, which will make you an extremely easy target, keep driving no matter what, let your vehicle gain speed, which will make it harder for the enemy to hit you. When we look at the TOW missile itself, it is definitely not the fastest, nor the slowest, which means that you will need to make sure there is enough open space that the target is driving across, which gives more time for the missile to reach its target, and remember to lead slightly ahead. Due to the extremely good penetration, aiming basically anywhere on a target of the BR and hitting will guarantee some levels of damage, so it is generally best to aim at the centre mass of the vehicle, to deal as much damage as possible. If the first missile hits but does not destroy the target, do not hesitate in firing a second which will usually finish the job.

The ROC armed forces have purchased 634 M113A1 APCs from the United States since 1964 and distributed them to mechanized infantry divisions and infantry battalions of armoured brigades. In 1979, arsenals of the Army Joint Logistics Command began to imitate the CM21 armoured vehicle based on the M113A1, and produced more than 1,000 CM21 APC and its variants.

In order to strengthen the combat effectiveness of the composite armoured brigade, the ROC Army purchased a number of M113A1 TOW ATGM carriers from the United States in 1977. These vehicles were mainly equipped by units of Army and Marine Corps. The M113A1 TOW ATGM carriers adopt the Israeli-designed RAMTA telescopic missile launchers and the American TOW-I missiles. They were the main mobile anti-tank forces of the combat units at that time. After the implementation of the reorganization program of armed forces codenamed "Lean" in 1998, all of the Army's TOW ATGM carriers were concentrated to the divisional level to use them intensively.

At present, the M113A1 TOW ATGM carriers of the ROC Army have been replaced by the M1045A2 Hummer missile carriers. As of 2019, only a small number of M113A1 missile carriers were still in service in the Marine Corps.