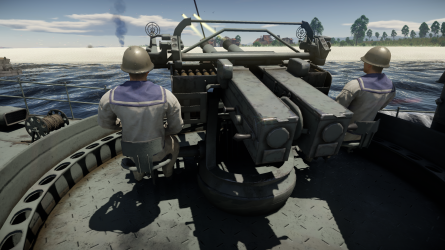 The 40 mm Vickers used on Type K-3 / No.1 Class firing at a close range naval target

The 40 mm/62 Vickers, also known as the 40 mm/62 Bi-Shiki, is a Japanese naval anti-aircraft gun. It is a derivative of the 40 mm 2pdr QF Mk.IIc, imported and later produced under license. It appears in both single and twin mounts, and has a 50-round magazine and access to a timed fuse HE round.

A licensed-built version of the British 2pdr QF Mk.II "pom-poms", the 40 mm/62 Vickers was officially designated the "BI" Type 91 indicating that the licensed version began production in the year 2591 under the Imperial calendar (1931 under the Gregorian calendar). Importation of British "pom-poms" began in 1925 with 500 guns and 200 mountings being imported. Initially fed by 50 round belts, there was an unsuccessful attempt to increase the capacity to 100 round belts. They would be the standard Imperial Japanese Navy anti-aircraft gun until 1935 when the low muzzle velocity and short effective range led to a replacement being sought. Their search led them to the French Hotchkiss 25 mm AA gun which they adopted as the 25 mm/60 Type 96. That said, just about every Japanese ship made between 1925 and 1935 was armed with the Vickers "BI" Type 91.