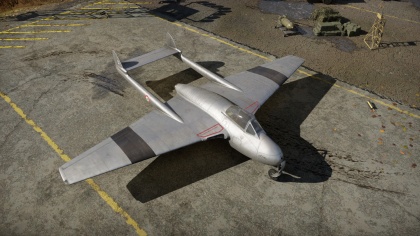 The Vampire FB 52A is a rank V Italian jet fighter with a battle rating of 7.7 (AB/SB) and 8.0 (RB). It was introduced in Update 1.91 "Night Vision". It is the first jet in the Italian tree's export fighter line, and is placed after the Re.2005 serie 0. It is followed by the rank VI fighter, the CL-13 Mk.4. The Vampire FB 52A is an upgraded version of the British Vampire FB 5, with a more powerful engine.