The armour protection of the T-80U is exceptional, especially if the incoming round hits one of the contact-5 ERA plates. The strongest parts of the tank are the turret front and a majority of the upper front plate. Weak areas include the lower front plate, driver view port, and cannon breach area. These weak spots can be very difficult to hit from medium and further distance ranges and even more so if the T-80U is hull down.

Fuel tanks on either side of the driver can soak up some shrapnel and add to the overall survivability. However, as with all Russian auto-loaded MBTs, there are only three crew members so a well-placed shot is capable of causing a crew knock-out. It's also worth noting that the placement of the ammo rack, below the turret in a carousel-style setup, leaves the T-80U particularly vulnerable to side shots causing ammunition detonation. The protection of the T-80U is very similar to the T-64B in terms of the size and placement of the weak areas.

The T-80U also benefits from the typical low silhouette Russian tankers will be accustomed to, with the vehicle being significantly smaller than its competitors. This allows the T-80U to be hidden behind small terrain deformities which other MBTs would otherwise be visible.

The mobility of the T-80U is actually superior to the T-80B despite weighing three tons more. This is due to the improved engine inside the T-80U which has a stock engine power of 1,106 hp and goes up to 1,250 hp once the appropriate modules have been researched. It has a maximum speed of 69 km/h (43 mph) forward and 9.7 km/h (6 mph) in reverse. The one downside is the traverse in neutral, taking around 19 seconds for a full 360° spin, but this can be greatly reduced if the tank is already in at least in 3rd gear.

The T-80U is armed with the same 125 mm cannon found in the T-80B, with the 3BM42 round proving competitive against other Rank VII offerings. As with previous vehicles of the family, the main gun is auto-loaded, so the loss of a crew member does not affect the loading times and the 6.5-second loading speed is competitive when compared to the 120 mm guns on the Leopard 2A5 and M1A1 Abrams. 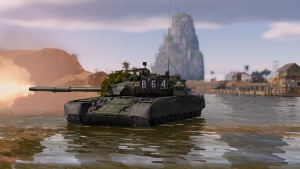