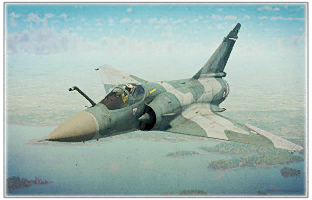 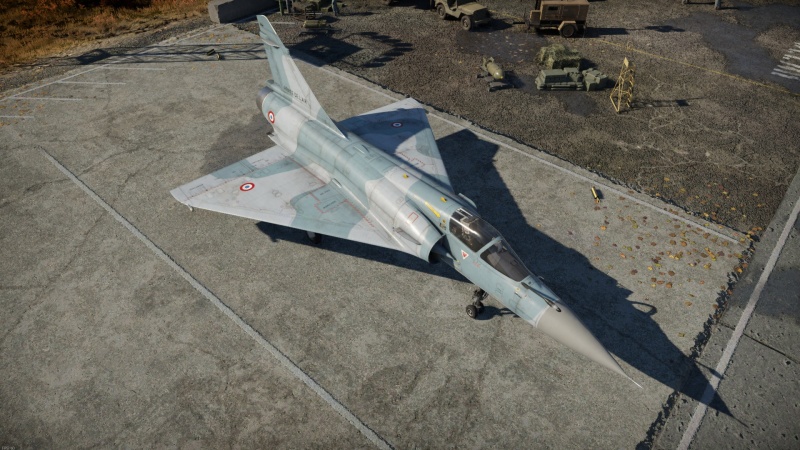 Pilots familiar with delta-wing fighter designs will be at home in the Mirage 2000. While you still bleed airspeed rapidly when pulling tight manoeuvres - which you can do quite easily thanks to its large delta wing, and leading-edge slats - speed is much less of a problem thanks to its new engine which provides excellent acceleration. Its combination of decent top-speed, exceptional acceleration, and its stunning nose authority ensures that anyone who finds the Mirage 2000 on their six o'clock is going to find it difficult to shake. Pilots of the Mirage 2000 will have to watch their energy at all times, ensuring they do not waste it all unwisely, leaving them in a vulnerable position.

*Installing countermeasures blocks the deployment of the chute.

The Mirage 2000C-S5 can be outfitted with the following ordnance presets:

The aircraft's weapons suite paired with its flight performance makes it a dangerous foe to any aircraft opposing it. The aircraft is a formidable foe in BVR engagements and even more so in a dogfight. This versatility offered by its great weapons and flight performance means that it can perform as a support fighter, slinging its Super 530D's from afar and at high altitudes. Thanks to its flight performance, it can also comfortably perform well as a frontline fighter, diving straight in to fire its Super 530D and excellent all-aspect IR R550 Magic 2 missiles. However, pilots of the Mirage 2000 will have to be careful of when they fire their missiles as it carries only 4 missiles in total, which is little compared to a lot of its competition. In addition, missiles such as the AIM-7F Sparrow, carried by some American fighters, possess a higher effective range than the Super 530D missile. Therefore, the Mirage 2000 pilots are advised to stay out of the range in which a longer-range missile can strike the Mirage, while being too far for the Mirage's Super 530D to strike back.

The worst-case scenario for a Mirage 2000 pilot would be to be caught in a low-altitude sustained turn (or rate fight) with an adversary such as the F-14 Tomcat, or the MiG-23MLD, which will create a host of problems for the Mirage 2000 that bleeds its airspeed quickly. The Mirage-2000 pilot will almost always prefer to dogfight at higher altitudes, avoiding sustained turns with enemies, and compensating for the rapid loss in energy by manoeuvring by converting altitude into airspeed that can be vital to victory as the Mirage manoeuvres into a position to secure victory.

When it comes to dogfighting, the Mirage's flight performance enables a skilled pilot to be a formidable adversary to any of its opponents, even to those such as the F-14A Early, and the MiG-23MLD. The Mirage's game plan should almost always be to get in, and out as quickly as possible. Taking advantage of the high AoA capability of the Mirage, and utilizing as much airspeed and altitude as possible is necessary to engage and defeat the target as quickly as possible, to give any prospecting enemies minimal time to find and defeat the Mirage while it is slow and vulnerable while busy in a dogfight.

During the mid-1960s, France and Britain agreed to design a swing-wing aircraft (AFVG project). France later split up from the project due to high costs to develop their own swing-wing aircraft, ultimately becoming the Mirage G8. (West Germany would end up collaborating with Britain to create the Panavia Tornado.) However, the Mirage G8 was rejected for being too costly and unable to dogfight. Dassault focused on what would become the 2000C, a single-engine fighter that would be far less expensive than the Mirage G8 and also meet the requirements of the French Air Force (AdA).

Due to its similarities with the Mirage III, it only took ~27 months to go from the project beginning to the first flight. The first prototype (Mirage 2000 No. 1) made its first flight on March 10, 1978, which lasted 65 minutes. The prototype was found to be both a high-speed aircraft (Mach 2) and an agile, capable dogfighter at low speeds. After 4 years, the first production Mirage 2000C (C abbreviated for chasseur: "fighter"), flew on the November 20, 1982. The French Air Force soon began to take delivery of the 2000Cs. The first 37 Mirage 2000Cs were the S1, S2, and S3, which included the SNECMA M53-5 engine and Thomson RDM radar. After the 37th Mirage 2000C airframe, they were upgraded to the SNECMA M53-P2 engine and RDI radar (Mirage 2000C-S4 - Mirage 2000C-S5). After No. 93, the Eclair countermeasure pod was replaced with countermeasure dispensers in the Karman fairings.