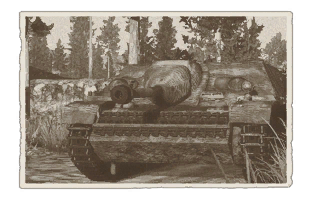 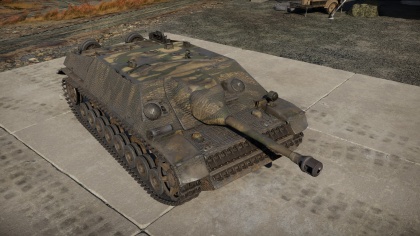 The Jagdpanzer IV, German armory designation Sd.Kfz. 162, is a rank III German tank destroyed with a battle rating of 4.7 (AB/RB/SB). It was introduced in during the Closed Beta Test for Ground Forces before Update 1.41.

As with every German tank destroyer getting flanked, will usually result in death. The only true way to use this tank to its ultimate advantage is to stay as far away from the battle as possible and stay perched high up. If you do find yourself at close range, protect your flanks, hide while reloading and don't miss.

A very effective tactic is to move to the corner of a building, preferably facing down a road or area that the enemy will likely frequent. You can then peek around the corner, your frontal armour will be angled, but your rear and side armour will not be exposed to the enemy. This makes you very difficult to kill. Most enemy rounds will bounce or cause minimal damage.

In September 1942, the Wehrmacht arms bureau called for a new type of assault vehicles. The specifications listed was 100 mm front armour, 40-50 mm on the sides, wide tracks, a top speed of 26 km/h, ground clearance of 50 cm, and a very low firing position. The design was to be armed with the 75 mm Pak 42 mounted on the Panther tanks. Though this project was originally conceived over a completely new chassis, the Panzer IV was chosen to be used instead. The design was to have a low silhouette and an enclosed casemate fighting compartment after experiences with the Marder IIIs showed that such features were necessary for a successful fighting vehicle.

The Panzer IV chassis was converted into the Jagdpanzer IV, which featured new designs to the original. The utilization of the Panzer IV chassis was met with much criticism by General Heinz Guderian, who saw the diverting of Panzer IV tank resources as unnecessary since the current assault gun StuG III was more than adequate in the role and Germany still needed reliable tanks that it could use. The vertical front hull armour was replaced with large sloped armour plates, ammunition and fuel were moved to accommodate the new superstructure design, and the auxiliary engine that once powered the Panzer IV turret was removed. The superstructure had 80 mm thick sloping armour that gives it an effective 100 mm thick. To simplify the production of this vehicle, the superstructure was essentially made of large interlocking plates that are welded together. The vehicle had a crew of four, the commander, gunner, loader, and driver. The vehicle was armed with a 75 mm gun, though originally suppose to be the one from the Panther, shortages forced the mounting of older guns such as the 75 mm Pak 39 L/48 cannon, which were less powerful than the Panther's PaK 42, but were still lethal. Due to the different gun mounts, three main variants were produced from the Jagdpanzer IV, the original Jagdpanzer IV (with the 75 mm Pak 39 L/48 cannon), the Panzer IV/70 (V), and the Panzer IV/70 (A) (Both of which have the 75 mm Pak 42 L/70 cannon).

The Jagdpanzer IV, mounting the 75 mm Pak 39, was designed and produced by Vomag. It was produced from January to November 1944 with about 769 units produced. The early version had a muzzle brake and zimmerit anti-magnetic paste added to the vehicle. However, the muzzle brake was removed as it kicks up a large amount of dust from the ground that obscures the gunner's sights so that was removed, and the zimmerit was also removed after September 1944 due to rumours that they were causing vehicle fires. Other modifications were made to the design over time, but the biggest change in its production was the addition of Schürzen side armour plates.

The Jagdpanzer IV (the name was interchangeable between all of its variants) was first issued on March 1944 and was employed in an anti-tank role in the Western and Eastern Front. The Jagdpanzer IV participated in the Normandy Campaign, Battle of the Bulge, and the Soviet Offensives on the Eastern Front. Their overall performance was very successful as tank destroyers and only sub-par in other roles that are usually taken by tanks or assault guns, as the high-velocity 75 mm cannon it mounts were unsuitable for anti-infantry and fortification purposes. However, they were soon put in positions of tanks due to shortages of capable fighting vehicles in German inventory. One of the popular Jagdpanzer IV aces was SS-Oberscharführer Rudolf Roy who was attached to the 12th SS Tank Destroyer Battalion. He was killed while looking out of his Jagdpanzer IV hatch during the Battle of the Bulge.

After World War II ended, the Jagdpanzer IV's design still saw service with the German Bundeswehr as the Hanomag-Henschel JPz 4-5|Kanonenjagdpanzer, which has the nearly same design as the Jagdpanzer IV, but most notably with a 90 mm gun. Some captured Jagdpanzer IVs were given out by the Soviet Union to Romania and Syria, but Romania scrapped all the German armour by 1954 and Syria used them in conflicts against Israel until 1967.

"This self-propelled gun was developed in 1943 to strengthen German anti-tank defensive capabilities. A very low, welded hull was placed on the Pz.Kpfw. IV's chassis, with reasonably-sloped front and side armor plates. This way, the front armor was almost 50% thicker than the tank's base model. The combat and control crew compartments were located in the front, and the engine was in the rear. The tank destroyer was armed with a 75 mm 7,5cm Pak39 L/48 anti-tank gun with a long 48 caliber barrel, mounted in the combat crew compartment. On the exterior, the gun was covered by a massive, cast mantlet. To enhance the armor protection on the sides of the self-propelled vehicle, additional Schurzen side skirts were added. Self-propelled anti-tank guns released before September 1944 had anti-magnetic Zimmerit paste applied to their vertical surfaces. Vomag AG factories released 769 of these vehicles from January to October 1944.

In August 1944, vehicles began to be produced with the 75 mm 7.5 cm KwK. 42 L/70 gun, similar to the gun installed on the Panther tank. This transition passed smoothly, and production of Jagdpanzer IV tanks with the shorter guns gradually tapered off.

This tank destroyer enjoyed great popularity with tank troops, since its gun could knock out virtually any Allied tank of its day. This anti-tank gun fought with anti-tank divisions on all fronts.

The generally successful vehicle had a number of shortcomings. Its front armor was 60 mm thick, resulting in the loss of a number of vehicles. However, increasing the thickness to 80 mm shifted the vehicle's center of gravity, overloading the front pair of road wheels, which were prone to fail."

Skin and Camouflages for the Jagdpanzer IV in Warthunder Live.