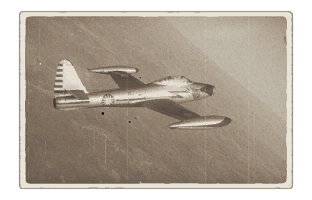 Republic Aircraft Company’s jump into the jet fighter market was not as smooth as they would have liked. All aircraft companies have issues early on with their prototypes and early models, however, they tend to grow out of them rather quickly, unfortunately, this was not to happen for Republic with the F-84. Designing fighters around a jet engine was relatively new and prototypes were rushed before full testing could take place. While promising that the F-84 would best Lockheed’s P-80 Shooting Star, the F-84B, C, D and E variants, for the most part, fell short. The issue was not solely the problem of the jet, but also the engine it was required to use. Deficiencies noted included weak wings, twisting of wing-tip fuel tanks, structure warping, skin buckling and a severe shortage of engines and engine parts for overhauls when the aircraft was used more often than expected. Several times the entire fleet of F-84s were grounded until severe defects could be rectified.

Six years after the YP-84 rolled off the assembly line, Republic had many of the previous deficiencies fixed and rolled out the F-84G. Not only did the F-84G address all of the previous model’s issues, but it also came out with several ground-breaking features which included the first fighter aircraft with the ability to refuel mid-flight and the ability to carry a Mark 7 nuclear bomb. Issues with the wings resulted in thicker wings adding strength to reduce twisting especially at high speeds and the wing-tip fuel tanks were modified to make them more aerodynamically stable during manoeuvres. This aircraft served the United States Air Force into the mid-1960 before it was retired, however other nations such as France and Italy continued to use the fighter past that point with Greece finally retiring their last three in 1991.

Even with the changes from earlier models, even in-game pilots will notice the quirkiness of the F-84G. Even with the more powerful Allison J35-A-29 jet engine, actual pilots of the Thunderjet nicknamed it “The World’s Fastest Tricycle” (a play on the newer tricycle landing gear configuration) or “The Lead Sled” due to its extremely long takeoff roll. Even though an upgrade from the F-84B, this aircraft has the same roll-out time, typically due to the heavier payloads afforded to this aircraft. Though, once at altitude and during attack runs, the F-84G is an incredibly stable platform and can be outfitted with a number of various suspended armaments along with its six 12.7 mm M3 Browning machine guns. Though each gun only has 300 rounds of ammunition, trigger control is necessary or else the pilot will be left with empty guns in short order. Considered a multi-role aircraft, the F-84G can be utilised as a fighter-interceptor, bomber interceptor and ground attack fighter. The F-84G can be laden with a variety of bombs ranging from 100 lbs all the way up to two 1,000 lb bombs. HVAR and Tiny Tim rockets are a viable option alone or mixed with bombs to expand the options of targets to be attacked depending on the map the pilot is flying in.

Like many jet fighters, flying slowly makes for an easy target and this is no exception for the F-84G. Speed is necessary to ensure manoeuvrability both to engage a target and to shake a tail. Though not the fastest fighter at this rank, the F-84G can hold its own and when pressed, the six centre lined M3 Browning machine guns can punch enough holes in an enemy fighter to bring it down and allow it to move onto the next target. Don’t expect this fighter when laden down with two 1,000 lbs bombs or two Tiny Tim and 24 HVAR rockets to excel in a dog-fight as it won’t with all that weight, however, after all that ordnance is released the F-84B can then mix it up, though it is preferable to maintain speed while performing Boom & Zoom manoeuvres allowing the fighter to get on target and then speed away to set up for the next shot.

While dealing with mixed reviews over its positive and negative aspects, the F-84 series aircraft paved the way for a later aircraft which magnified all of the positive qualities of the F-84, being a stable firing platform, loaded to the gills with assorted suspended armaments and a main gun which rained destruction on the enemy, this aircraft would later be know as the Fairchild-Republic A-10 Thunderbolt II.

In early 1944, Alexander Kartveli, the chief designer for the Republic Aviation Aircraft Company set out to work on a replacement for the piston-powered P-47 Thunderbolt which instead would be powered by a turbojet. All attempts at trying to use the P-47 frame to accommodate a turbojet failed and Kartveli resorted to designing a brand new aircraft around an axial compressor turbojet engine. Due to the nature of the engine taking up a large majority of the fuselage, fuel tanks were designed to be in the wings of the aircraft, however, the body was streamlined to make the smallest profile possible and retain all necessary critical components.

The USAAF in September 1944 released new requirements for a daytime fighter along with specific characteristics such as the top speed of 600 mph (966 kph), armament of six 21.7mm machine guns or four 15.2 mm machine guns along with housing a General Electric TG-180 axial turbojet also known as the Allison J35 series turbojet engine. Republic proposed their new aircraft and on paper proposed it would be superior to Lockheed’s P-80 Shooting Star. The USAAF noting Republic’s already proven experience with single-seat fighters proposed a contract without holding any competition. These initial order fighters were listed as YP-84As and P-84Bs.

In 1947, the USAF changed the pursuit designation of the aircraft to fighter and thus the P-84 became the F-84. The YP-84A and the F-84B only differed when it came to the type of M3 machine guns they carried, as the F-84B had faster-firing machine guns than the YP-84A. Early successes of the F-84B were overshadowed by problem after problem including a speed restriction limiting flight to no more than Mach 0.8 as any faster and the aircraft experienced control reversal where the pilot would input normal commands with the control stick and the opposite manoeuvre would occur (for instance if the pilot pulled back on the control stick to make the aircraft climb, the aircraft would actually begin to dive and vice versa). Even with the speed restrictions, the entire fleet of F-84B fighters was grounded by 1948 due to parts shortages and structural failures. It was also at this time that the F-84C aircraft were also determined to be incapable of performing any of their mission parameters, however since the F-84D was already under production (with all of the B and C variants issues being resolved), the program continued. Funding was allocated to upgrade the B and C variants, however, both were finally withdrawn from active duty service by the end of 1952.

Testing of the F-84D determined that the wings needed to be covered with a thicker aluminium skin to strengthen them which was helpful because the engine was upgraded to the more powerful J35-A-17D. Here it was found that during high-G manoeuvres, the wingtip fuel tanks led to the structural failure of the wings due to twisting motions. A simple fix of adding a small triangular fin to the external portion of the fuel tank alleviated that problem. Despite the fixes introduced with the D variant, it too was withdrawn from active duty in 1952. The F-84E variant fighter saw modifications specifically with strengthened wings and a larger cockpit which was necessary to equip advanced avionics to include an A-1C gunsight which worked with an APG-30 radar. Folding rocket racks were also developed so that once the HVAR rockets were fired; the racks would fold flush with the wing increasing the aircraft’s overall aerodynamics. Unfortunately even with all of the modifications, failure of the aircraft hinged upon the Allison J35-A-17 engines which were only designed to be flown for 25 hours a month and would receive a complete overhaul after 100 hours of flight. Due to the number of sorties flown in the Korean War, engine overhauls were taking place more frequently and quickly exhausted all of the spare parts and new engines produced.