Difference between revisions of "Chi-To Late" 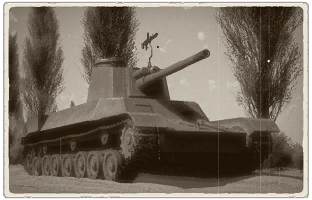 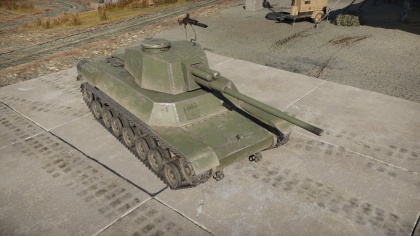 The Type 4 Chi-To Late is a rank III Japanese medium tank with a battle rating of 4.7 (AB/RB/SB). It was introduced in Update 1.69 "Regia Aeronautica". An improvement over the original Chi-To with a more sloped hull for better protection.

Similar to the Chi-To, the tank's mobility is only average with average armour and a decent gun. Like most Japanese tanks in Rank III, it is most effective as a sniper due to its thin armour, low turret traverse, and good gun depression. Sticking to the rear and letting heavier units advance is most ideal, however, this is not always possible and you will need to push with your team on the front at times. At times like this, play cautiously and stick to cover, as your thin side armour, poor hull traverse, and poor turret traverse can result in you easily being flanked. The lack of APC rounds like all Japanese guns gives the tank poor performance when fighting heavily sloped armour like the T-34's or IS's, and ricochets will be a common occurrence. It is best to aim for flat spots of armour where you will easily penetrate and let the HE filler do the rest.

A more armoured tank than the Chi-To before it, the Chi-To Late is a bit more forgiving. Like many Japanese tanks of Rank III, the Chi-To Late posses the Type 5 75 mm gun that allows it to penetrate nearly everything it fights with decent consistency. The high muzzle velocity, above average pen against flat and gently sloped armour, good gun depression and good explosive filler make the tank a good sniper in most cases. However, unlike the Chi-To, the sloped armour and smaller, symmetrical turret design make the tank more capable in a brawling situation where you are more likely to get hit.

In terms of raw thickness, the armour is the same. However the Chi-To Late's hull armour is roughly equivalent to that of the KV-1 (L-11) frontally and therefore is fairly safe from many guns beneath its battle rating such as the M3 75 mm, QF 57mm 6pdr, and F-34 76 mm. Guns of its rank such as the M1 76 mm, KwK 40, 85 mm D-5T, or the QF 17pdr will not struggle with its armour however, so you should not push as if your armour is effective as such.

Armour is as good as Japanese medium tanks will get. It can bounce most guns of Rank III and below if you angle your armour well enough (~35-45º), but long-barrelled guns (such as those mentioned above) will have no trouble getting through you.

The mobility on this tank is decent. It will get you to where you need reasonably quickly, and the top speed is respectable. The turning speed and acceleration leaves much to be desired, but isn't terrible overall.

The 7.5cm Tank Gun Type 5 performs very well at 4.7, and there are seldom any targets that can bounce the Type 4 Kou APHE shell from the front of their armour. It also has decent reloading and great explosive filler, meaning that shots that penetrate will either inflict heavy damage or result in a one-shot. 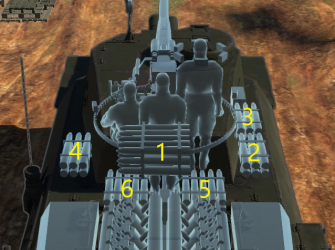 Ammo racks for the Chi-To Late.

As previously stated, the Chi-To Late best performs in the role of sniper, engaging hulldown at medium to long range against opposing medium tanks. The good gun depression, average mobility, and good reverse speed allow you to make it to good positions at an average pace and allow you to reverse back into cover when reloading.

A42 Churchill VII: do not engage from the front at all. Sneak around to the side and shoot there. ARL 44: shoot the sides. It's not worth facing this tank head on, it's too much of a risk. ARL 44 ACL-1: aim for the turret if you face this tank from the front, then finish it from the sides. Be careful not to get shot. M6 Heavy: the frontal armour on this thing can be a bit fiddly. Aim for a spot that doesn't seem to have more than one armour plate layered on it.