Difference between revisions of "C.R.714" 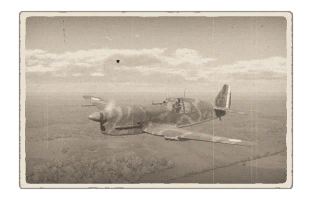 the caudron 714 is really dificult to play because your only avantage is the speed at this br.

In reality it's a racing plane, not a good fighter.

The Caudron CR714 was imagined around the concept of the "Light hunter". The CR714 is a direct descendant of the brand's glorious record aircraft. The first C710 fixed-train model, studied by Maurice DEVLIEGER's team, was therefore presented in 1934, in response to the C1 program (renewal of hunting) in the light hunter category. The C710, which flew for the first time on July 10, 1936, was rejected due to its too limited performance: 460 km / h in level. It is quickly followed by the CR713 "Cyclone". The design is identical to the C710, but this time it has a retractable train, and a redesigned fin. It flew for the first time in December 1937. Only Russia was of interest for this CR713, as well as for the C710. (see version chapter)

Caudron continues the development of the Caudron hunter, and presents the CR714, very similar to the CR713, it flies for the first time on July 6, 1936. The tests continue (see chapter version) while the first orders arrive in November 1938: 20 copies and 180 optional. The Air Force saw in this device a double interest: it did not use the Hispano Suiza 12Y-31 engine of the D520 and MS 406 in particular, and used non-strategic materials. It is actually built mainly in wood, with a wing plywood and only a few magnesium fairings are used on the fuselage. The CR714 quickly revealed its major weaknesses: underpowered, and weighed down by the latest reinforcements and military equipment, its performance is mediocre, while its armament composed of 4 machine guns of 7.5 mm in the wings under fairings, is far too weak. The Air Force decided to block the production of the 90th copy, and to reserve a part of the copies already manufactured in Finland.

Delivery started slowly, with the commissioning of 9 aircraft in March 1940. 6 of them were delivered to Finland which withdrew them from service in March 1941 ... This is one of them, N°5 (registered C-553), which after many journeys is being restored, and may one day be presented at the Air and Space Museum

The CR714 were first assigned to the DIAP (Polish Aviation Instruction Depot) and to the GCMP (Polish Fighter and Marching Group) for training aircraft, before going to equip the brand new GC I / 145 " Warsaw ". This group is initially assigned to the defense of Lyon, before being moved to the field of Villacoublay. Despite problems of reliability, a lack of qualified personnel and spare parts, the group aligned on May 24, 1940, thirty aircraft including 8 operational.

The Polish pilots were able to make the most of this aircraft, which was so inefficient. The speed of the CR714 did not allow them to catch up with the fast German bombers, yet they managed to shoot down 8 enemy aircraft for the loss of 4 pilots. On the evening of June 11, 1940, only 11 CR714 remain in the group, which will finally collect Bloch 152 and Morane 406.

When the Germans seize the ground of Guyancourt, or its based the workshops of the manufacturer, they seize about twenty plane which will be used as lure on airfields. The devices present in the Free Zone were reformed at the end of 1941.

The Caudron firm was known before the war for these magnificent racing planes, its prestigious pilots, including Hélène Boucher, tragically disappeared, but the Caudron 714 demonstrated that one could not transform a "Racer" into a fighter plane. Military equipment weighs down the cell and penalizes performance: the concept of the lightly motorized light fighter is a failure.