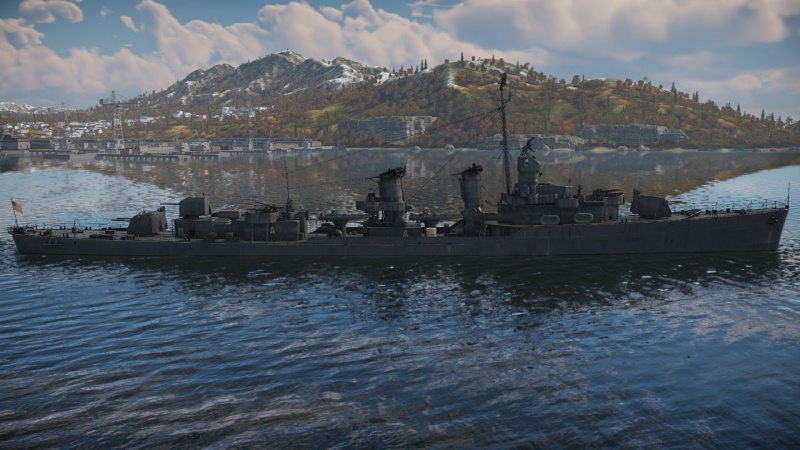 The Porter-class, USS Phelps (DD-360), 1944 is a premium gift rank III American destroyer with a battle rating of 5.0 (AB/RB/SB). It was introduced during Update 1.95 "Northern Wind" as a reward for World War Season 2: Attack from the Sea.

USS Phelps has below-average survivability for an American destroyer, but still enough to remain competitive at its BR. It has a small crew complement of just 194 crew members, meaning that it tends to die faster in prolonged brawls than other destroyers at its BR. However, it does have the 16 mm anti-fragmentation armour belt found on American destroyers, which greatly enhances its survivability - this belt can block HE shells up to 76 mm and most smaller-calibre AP rounds as well. Note that the ship's guns feature ready-racks directly underneath, similar to other American destroyers - a well-placed hit to these racks can explode the shells and cause serious damage, or even kill the ship directly.

In terms of mobility, Phelps is pretty average. The ship has a maximum speed of 84 km/h in AB and 69 km/h in RB, which is pretty average for destroyers, being eclipsed by the Soviet and Japanese destroyers. The ship is relatively responsive in terms of acceleration and turning circle, but again, average among its contemporaries. 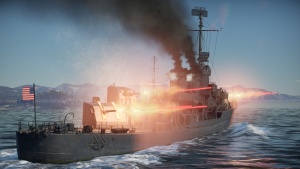 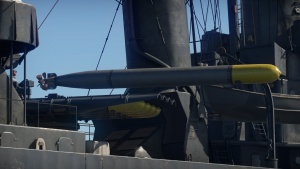 The Phelps carries two quadruple torpedo launchers each with four Mk. 15 torpedoes with no reloads. These torpedoes were the standard torpedoes for American destroyers and have a relatively high speed, making them effective against larger targets. However, note that their relatively small explosive charge (<300 kg) prevents them from doing massive amounts of damage to cruiser-size targets, unlike the Japanese Type 93 torpedoes. The Phelps also gets access to depth charges, but these are almost entirely useless as they have an extremely short effective range; thus, the best strategy is to avoid equipping them entirely.

Phelps is a very strong destroyer at its BR, with a significant primary and anti-aircraft armament suite which enables it to fulfill a variety of roles, ranging from ambush / flanking to anti-aircraft defence. However, the ship does not have good survivability among destroyers, so situational awareness is key to maintaining this ship's ability to fight.

Phelps can be used in several roles. In anti-ship combat, a flanker / ambush strategy tends to work best. This strategy makes full use of the ship's extremely-powerful main guns while preserving survivability. In this type of approach, try to head through the sides of maps, particularly behind island cover that prevents enemies from hitting your ship (i.e. the large island formations on South Kvarken). Utilizing choke points, being places that enemy ships tend to head to, is extremely important. Once in position, you can simply wait for enemy destoyers to pop up, and shred them with your heavy main armament. Try to ensure that you always fire first, as the person who fires first will typically win the engagement. Utilize the 5-inch main guns, firing HE, and shred through the crew compartments of enemy destroyers. In the unlikely case that you encounter a cruiser, try to seek the help of teammates, as Phelps cannot compete with cruisers on even terms. Finally, avoid open-sea combat at all costs, because Phelps will do the worst where it cannot make use of island cover.

As well, Phelps can be used in an anti-aircraft and support role. This destroyer has exceptionally powerful anti-aircraft guns, including eight 40 mm Bofors guns which can effectively shred aircraft at ranges out to 5 kilometres. In this type of playstyle, the Phelps does better as a 2nd or 3rd spawn - this means that you spawn the ship late in the battle when enemy players are already switching to aircraft. Stay with your teammates and shoot at enemy aircraft with your main and secondary guns - the 5''/38 main battery can effectively engage aircraft at very long ranges. However, this does take practice, as there is no aim assist for ship guns in RB, and no aim assist exceeding 2.5 km in AB. Stay with your teammates and maintain a 5 km no-fly zone around your battle group. 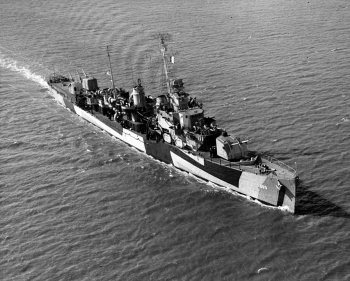 In the 1920’s, the USA acquired a pressing need to equip its fleet with so-called destroyer leaders, i.e. larger and better armed flagships for destroyer flotillas. At the time when the military was trying to convince the US government of the need for these vessels, and the government was arguing that the country already had sufficient numbers of standard destroyers, the London Naval Conference was held to discuss naval disarmament. The conference established an upper displacement limit of 1,850 tonnes for destroyer leaders, which prompted the development of a new ship that would conform to this new international military standard. A preliminary design for the new command ship was ready by November 1930. After almost 18 months of consultations and negotiations, the final design was approved. With a displacement of 1,850 tonnes, the ship carried eight 127mm guns, two quadruple 28mm guns (“Chicago pianos”), 2x4 torpedo launchers and light half-inch armour. All eight of the planned Porter-class destroyers were built and brought into service by 1937.

The realities of war revealed several defects in the new leaders, the most significant one was their extremely weak anti-air defence. The ship’s 127mm guns were not universal, and the power of the two “Chicago pianos” was woefully inadequate for defending the ship against aircraft attacks. The Porter-class ships underwent two major modernizations intended to enhance the leaders’ firepower. By 1944, the ships were markedly different. First of all, the outdated primary guns were replaced with all-purpose weapons, and their number was reduced to five in three turrets. The ship gained a formidable anti-air battery – one quadruple and two twinned 40mm Bofors guns, six 20mm Oerlikons, and high-calibre machine guns. Looking beyond armament, the ship’s decks were also transformed: the bridge was changed, the height of the rear superstructure was reduced, and reserve torpedoes were removed. Porter-class ships served in this form until they were decommissioned in the early post-war period.