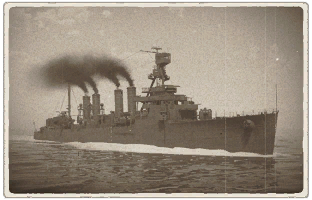 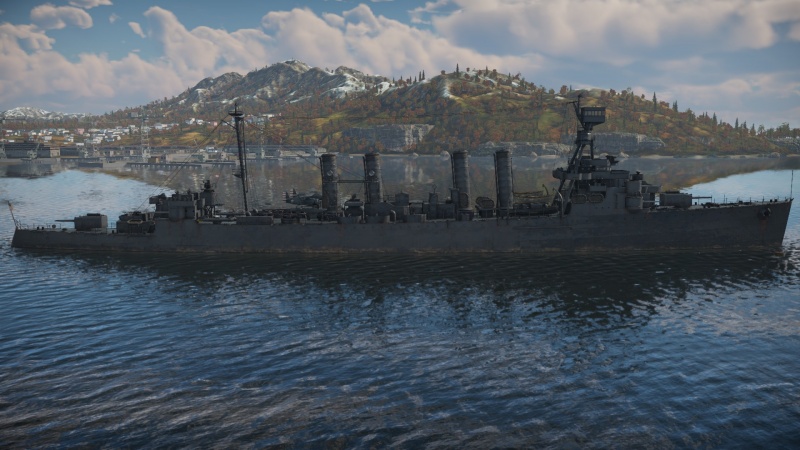 The Omaha-class, USS Detroit (CL-8), 1942 is a premium gift rank III American light cruiser with a battle rating of 5.0 (AB/RB/SB). It was introduced during Update "Red Skies" as a reward for Battle Pass: Season IV, "Fearless Voltigeur".

The 3 inch (76 mm) cannons do have HE-VT shells, meaning that they can ward off planes and ships, but only at close range.

The ship has a pair of torpedo launchers, but their poor placement and poor torpedoes makes them a poor choice to use.

Located on the stern are two catapults with one SOC-1 scout plane each which provide unique offensive and defensive abilities, expanding tactical options. Ship-launched scout planes fly just like regular tree units but lack munition choices and cockpit views. Alongside the typical abilities of strafing, dropping 2 x 100 lb bombs, and capping zones, the SOC-1 and other scout planes have the added ability to lay down smoke cover (up to 3 times). Captains will be wise to remember to utilise the aircraft and consider when best to use it, for example to cap a point early or late in the match, to create a smoke screen to stymie enemy bombardment and repair, to attack enemy units directly, or perhaps something completely new! With two scout planes one can risk a cap attempt at the beginning of the match, saving the second for any opportunity that presents itself.

While using the USS Detroit, try to exploit its mobility advantage and flank around the map. Use cover to make up for the subpar armour of the ship. When playing this ship, make sure you avoid higher-tier cruisers like IJN Mogami, HMS London or Admiral Hipper and go for destroyers and lower-tier cruisers.