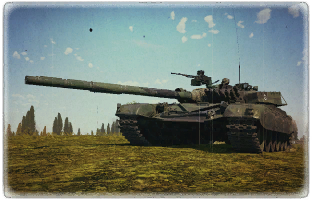 The T-72M1 is a rank VI Swedish medium tank with a battle rating of 9.3 (AB/RB/SB). It was introduced in Update "Fire and Ice".

An export version of the Soviet T-72A, the T-72M1 carries mostly the same characteristics of the original version in terms of armament, mobility, and armour, though the latter has some slight changes with an applique armour on the front glacis.

The T-72M1 is basically a near identical copy of the T-72A found in the Soviet tech tree, therefore the armour layout is also almost identical. Some differences are the additional applique armour placed on the front glacis. While not substantially thick, the sloping effect on top of the composite front glacis might be enough to prevent some shells from fully penetrating.

The hull and turret of the T-72M1 are strong enough to somewhat reliably bounce some shells and eat, although it still possesses the same "weak spots" that most other soviet tanks have (weak lower front plate, drivers optics etc.)

One of the key strengths of the T-72M1 is its armour. The quartz core composed turret will bounce many shots and can even eat up some ATGMs. In terms of armament, the T-72M1 boasts the very powerful and accurate 125 mm 2A46M gun that Soviet T-72A tankers will already be familiar with. Make sure to research the 3BM15 APFSDS round as soon as you can (after Parts and FPE), as the stock HEATFS round has some shortcomings.

The T-72 is a Soviet-designed main battle tank which started production in 1971. It quickly became the main workhorse for the Soviet army and was spread around in many former Warsaw pact nations, as well being exported to multiple others. Finland bought 162 T-72 tanks which were first adopted into service in 1984. 63 were bought from the Soviets while the remaining 99 were bought from East-Germany's storage after the German unification. Finland operated the T-72 as their main MBT until they were withdrawn from service in 2006 and replaced by Leopard 2A4 tanks. The Finnish army also looked into creating some domestic upgrade packages for the T-72, only known as "Finmod". Little is known about these planned upgrades since the project files remain classified until the late 2020's.