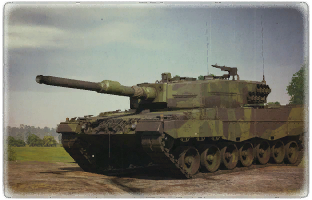 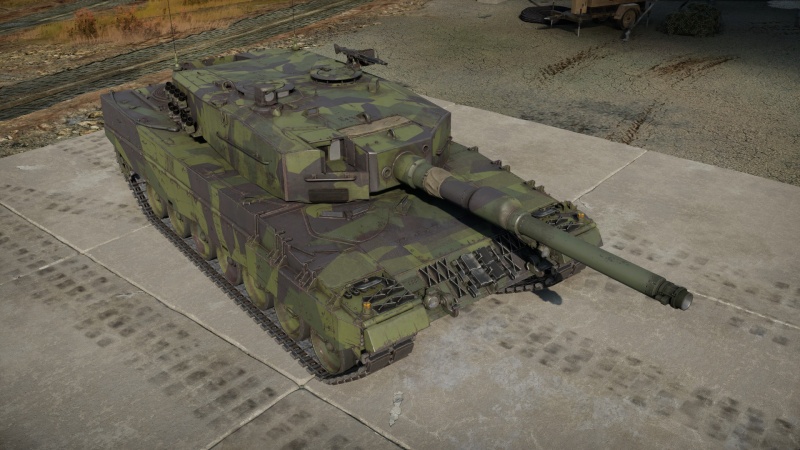 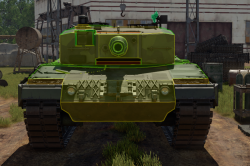 Frontal armour display of the Strv 121.

The Strv 121's kinetic protection is reasonable, with the turret cheeks near-invulnerable to all but the most powerful rounds (e.g. CL3143) and the upper front plate capable of protecting against less powerful rounds (e.g. M735) - however besides these sections the remainder of the vehicle is largely vulnerable to high-powered kinetic rounds; of note are the weak lower front plate and the gun mantlet, both of which are reasonably visible targets, as well as the gunner's optics.

The vehicle sports significantly better all-round chemical protection, with an upper hull and turret essentially immune to all but the most powerful ATGMs frontally, with upwards of 800 mm worth of equivalent protection in places. Despite this, it's advisable to be wary of incoming ATGMs as a well-placed round may sneak past the heavily protected areas - and some missiles such as those of the ADATS will slice straight through even the turret cheeks.

As with most other MBTs, the Strv 121 is particularly vulnerable from the sides and back.

The Strv 121 is reasonably survivable, with some degree of crew spacing. However, from certain angles, the crew are placed in a straight line and successful penetration may impact three of the four crew members, resulting in a crew knock-out. In addition, well-placed side shots may impact all three turret crew members.

The Strv 121 is powered by an MTU MB 838 Ca-M500 engine which produces a whopping 1,500 hp (1,100 kW), resulting in a power-to-weight ratio of slightly over 27 hp per tonne, comparable to the ratio of the early Abrams and identical to the T-80U. As such, the Strv 121 is quite mobile despite weighing over 55 tonnes, comfortably able to reach 72 km/h on-road and well capable of keeping up with its competitors. This allows for an active, aggressive playstyle, using the Leopard's high speed and good acceleration characteristics to get into an early flanking position or take early cap points - though it is important to keep in mind that opposition forces might attempt the same.

The Strv 121 has a maximum reverse speed of 31 km/h which it reaches easily, allowing for a quick retreat in sub-optimal situations.

The 120 mm kan Strv 121 is a domestic production of the famous 120 mm Rheinmetall L/44 cannon and is mounted as the primary armament on the Strv 121, offering a balance of firepower, accuracy, and sustained rate of fire. The 121 has three rounds available to it: slsgr m/95, DM13 APFSDS and DM23 APFSDS. Of these, only DM13 is available when the vehicle is stock, with slsgr m/95 as a tier 2 and DM23 a tier 4 modification. The L/44 is reasonably accurate at long range with any ammunition, however minor round deviation may be evident at extreme ranges (over 2,000 m).

It's advisable to primarily rely on the best available APFSDS round for engaging other MBTs. HE should rarely be used but can prove to be useful for more experienced players. 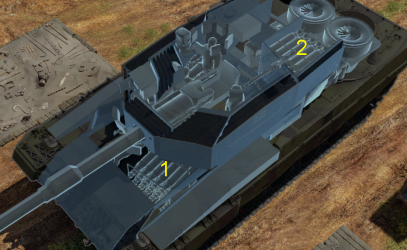 First stage only: 16 rounds (15 in rack + 1 in gun), stored within blow-out protected compartment.

The Strv 121 is equipped with one pintle-mounted machine gun and one coaxial machine gun. These can be used as an anti-air deterrent or for clearing out light obstacles and crew from open vehicles.

The Strv 121 may feel somewhat sluggish when stock, but unlike the German Leopard 2A4 that the Strv 121 is based off of, the 121 gets DM13 stock. This allows for more aggressive early research play than its German brother.

The 121 can be used comfortably in both urban and rural environments, providing the vehicle's weaknesses are kept in mind. While it is capable in most forms of engagement, it does lack the precision of the British Challenger MBTs or the extreme round velocities of the Russian T-64/T-80 series. The 121 also has a particularly large and blocky profile, making for a particularly visible target in many situations.

Considering the above, a Strv 121 player should utilize its great mobility and competitive gun to get into early positions to pick off unsuspecting targets, rather than attempting to engage opposing forces head-on.

When the Swedish Military decided to procure the German-built Leopard Improved (Strv 122), they decided to also lease Leopard 2A4 tanks from Germany as part of the deal. 160 Leopard 2A4s were delivered in 1994, with the stipulation that they would be returned after 15 years. The Bundeswehr was willing to loan out their tanks because of the requirement that they reduce the amount of military equipment in service, due to the end of the Cold War. When the contract ended, 20 vehicles were purchased and kept[1].

The Swedish Leopard 2A4s were designated as the Stridsvagn (Strv) 121. They came from various production series - known as losung - from losung 1 (built in 1979) to losung 5 (built in 1987). As such, there were some minor external variations among the Strv 121 tanks.