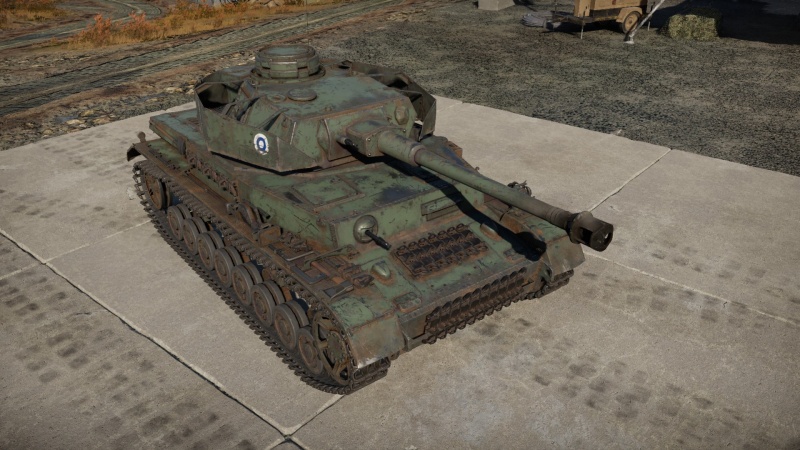 While its KwK40 L48 main gun is quite powerful for its BR, it has obvious weaknesses in its armour and should not be used as a main line tank or you will quickly be back to the hangar screen. Staying with allies to assist in finishing a tank off or staying behind to act as a sniper is this tank preferred job description.

This Panzer IV is a Ausf. J variant. The biggest difference with the German Pz.IV J is the lack of a pintle-mounted MG over the turret, the lack of Ostketten for a better mobility in the snow, and the lack of add-on armour.

The turret traverse speed is slow since it is rotated manually.

The MG34 can deal with open-topped vehicles, it can also be used to assist in marking targets for friendly forces. As there is no external MG, it has a very limited use when dealing with hostile aircraft.

The Pz.IV suffers from its slow, manual turret traverse rate. This causes the Panzer IV to lose flexibility in reacting to close encounters without turning the entire hull around. As such, it is recommended not to use the Panzer IV as a front-line assaulter in combat.

Tactics-wise, the Panzer IV is perfect for sniping and ambushes, where the slower turret traverse rate affects its combat performance less. Attack from a distance, especially while that enemy is focused on other allies in the team. Ambushes can also work in close-range events when watching corners, street intersections, and choke points, but be wary of any enemies trying to outmanoeuvre the Panzer IV as it would require drastic action with the slow turret rate. Try not to engage the enemy in a straight-up front confrontation as most enemies would be able to easily cleave through the front armour and knock out your vehicle.

Although any tank of Rank III can destroy the Panzer IV pretty quickly, the tanks that mostly need to avoided in open combat are IS-2, KV-2, SU-152, Tiger H1 and Panther tanks. Most of the heavy tanks that it will face include Tigers, the last of KV series, IS-1s, and even some IS-2s. Particularly, IS-2s will be the toughest opponent and can take out the Panzer IV with one hit. Avoid frontal confrontation at all cost. Instead try to be sneaky and attack them from the sides where they become vulnerable.