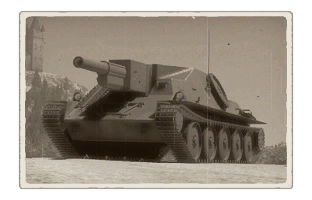 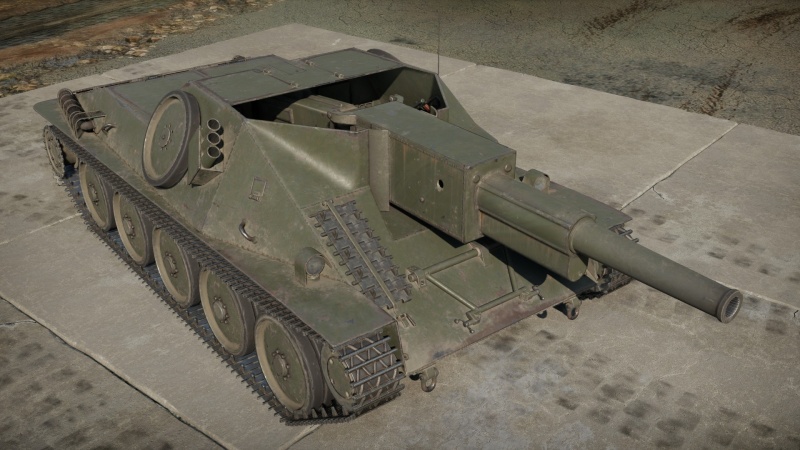 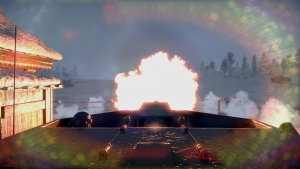 The Stormartillerivagn 20.12.48 is a premium gift rank II Swedish tank destroyer with a battle rating of 3.7 (AB/RB/SB). It was introduced in Update 1.95 "Northern Wind" as a premium pack in the Gaijin store. It was removed from sale after the 2022 May sale. It was briefly made available for purchase with Golden Eagles

The SAV 20.12.48 was a private venture by Bofors to design a next generation assault gun for both export purposes and indigenous use following WWII. The main goal was to make a light and manoeuvrable armoured vehicle with a 12 cm autocannon, capable of dealing with both soft targets and enemy tanks. A prototype was built during the late 1940s but no one was willing to buy it in a world that was littered in cheap surplus military vehicles and the project was scrapped.

In-game it is a very fast vehicle with a low silhouette and can easily manoeuvre around the map and flank enemies. It is armed with the aforementioned 12 cm autocannon of Bofors design and has a fire rate of 50 rounds per minute, meaning a reload speed of 1.2 seconds between shots, which is the highest in the game for its calibre. The gun's velocity however is subpar and requires good aim and close quarters combat to be effective. Another result of the low velocity is subpar penetration, but because of the vehicle's high mobility, coupled with the gun's high rate of fire and powerful ammunition, it has no trouble taking on any type of vehicle that it may come across during conventional matches. 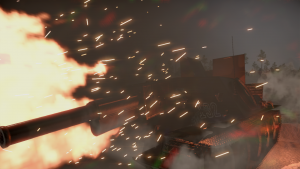 The SAV 20.12.48 is very lightly armoured, sacrificing protection for mobility. The highly sloped glacis is 30 mm thick, and can sometimes cause rounds to ricochet, but it is not reliable in any sense of the word. The rest of the tank is vulnerable to even heavy machine guns, and the open top is extremely vulnerable to strafing aircraft. Ammunition is stored in two primary deposits at the back of the crew compartment and is easily hit if the vehicle is penetrated. 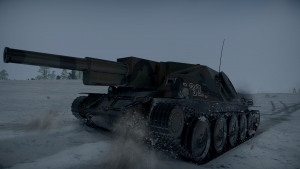 The SAV 20.12.48 has excellent mobility for a tank destroyer, featuring a high top speed as well as a fast reverse. The result is a highly agile tank destroyer that is capable of taking positions or retreating into cover quickly. 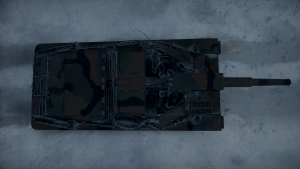 120 mm automatkanon
Autoloader
Automatically feeds projectiles into the breech. The speed does not depend on the skills of the loader
Ammunition62 rounds
Reload1.2 s
Vertical guidance-10° / 25°
Horizontal guidance-15° / 15°
Main article: automatkanon (120 mm)

The 120 mm automatkanon is a potentially devastating weapon. It is fitted with an automatic loader that is fed by a six-round clip, for a total of seven shots ready to go once fully loaded (including one in the gun barrel). The autoloader has an extremely fast reload of only 1.2 s, allowing the SAV 20.12.48 to engage up to seven targets in under 10 s. Once the clip has been expended, a new round must be loaded into the clip before the autoloader may be cycled and the gun made ready to fire. However, this process only takes a few seconds. The gun also has a good amount of gun depression, allowing the Sav 20.12.48 to abuse hills when combined with the high reverse speed.

The primary shell is the hpgr m/50 APCBC round. With nearly 1 kg of explosive filler, it is extremely deadly and almost guaranteed to knock out anything with a single shot if it penetrates the crew compartment. Its penetration is quite respectable; although not quite enough to frontally penetrate everything the Sav 20.12.48 can encounter, it has more than enough penetration to kill most tanks from the side. It has a relatively low muzzle velocity, however, and is thus hard to hit with at long range.

The SAV 20.12.48 also has a capable HE shell; sgr M/50Z, with over 2 kg of explosive filler. This shell is capable of penetrating and overpressuring the roofs of most of the vehicles and is a great alternative if the APCBC doesn't cut it. It is especially effective at taking out hull-down opponents who attempt to hide their hull's weak spots. 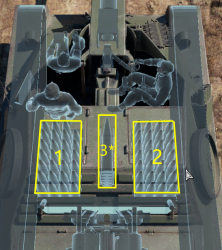 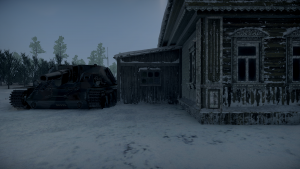 The combination of high mobility, powerful explosive filler APCBC shells, and autoloader make the Sav 20.12.48 an extremely dangerous tank destroyer to face. It is fast enough to quickly setup ambush positions near where the enemy team is likely to pass by, and a careless team can quickly find itself losing up to seven tanks in less than 10 s to the Sav 20.12.48 lying in ambush. Ideally, the Sav 20.12.48 would also be in a hull down position, where most of the tank can be hidden since the gun is mounted near the top of the vehicle and the high reverse speed allows it to back into cover quickly.

The vehicle itself is very fragile, however, and if it is caught out of position it is very easily destroyed. It is also very vulnerable to aircraft due to the open top, and has no means of defending itself from aircraft.

It can also be very tempting to fire off all seven rounds at once, but as with all autoloaders, trigger discipline is a very important skill to develop in order to use the vehicle to its full potential.

Most of the heavy tanks that the SAV 20.12.48 is able to face are largely resistant to your shells, especially if they're angled. If you see a KV-1 or Churchill, disengage and let your allies with better firepower take these out. 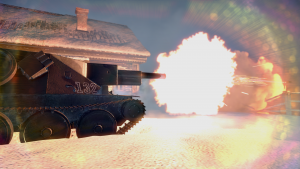 In 1948, Bofors began work on developing a new self-propelled gun as part of a private venture in an effort to realize a long-lasting goal of establishing itself as a manufacturer of armoured fighting vehicles, alongside its already proven reputation in arms production.

To do so, Bofors came up with a design for a new SPG, which incorporated a 12cm cannon, whose design was heavily inspired by those used on destroyer vessels, along with a highly effective autoloading mechanism. The design was ready by the end of 1948 and a single prototype was constructed in the following year.

As a result of the lacking interest, the SAV 20.12.48 never went into production. Despite its failure, the project wasn't a complete loss for Bofors, as some of the experiences gained during its development later found application in other vehicles, such as the far more successful Strv 103.