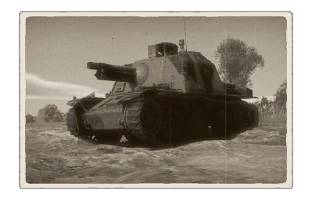 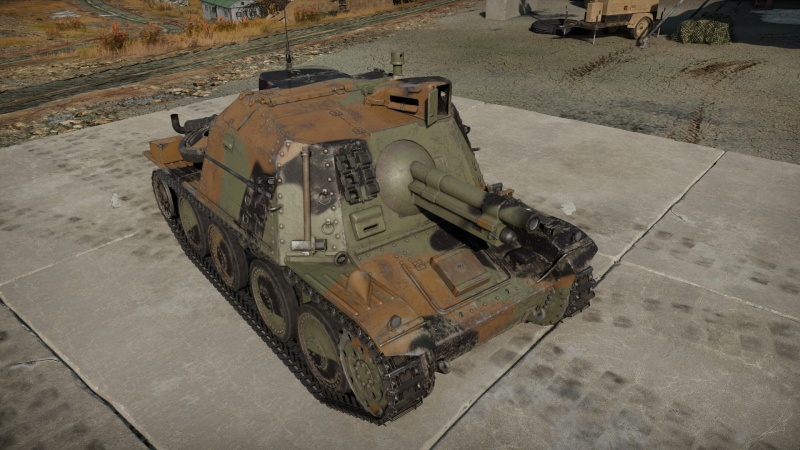 The Sav m/43 has up to 50 mm of armour in front, which is capable of deflecting some guns commonly encountered but is still vulnerable to larger calibres. It has better frontal protection than the Ikv 72, but is still rather lightly armoured from other angles. The engine deck is only 10 mm thick, and can be penetrated by aircraft heavy machine guns and cannons. The side armour is only 15 mm thick at most, and can also be penetrated quite easily by heavy machins guns and autocannon fire. Due to the cramped crew compartment and scattered ammunition within the compartment, any penetration by a shell is likely to cause critical damage to multiple modules and/or crew members.

The Sav m/43 is based on the chassis of the Strv m/41 and thus has a similar level of mobility. It is considerably heavier, however, and thus correspondingly more sluggish. While the forward top speed is adequate, the reverse speed is quite poor, making it hard to retreat. It is also noticeably slower than the Ikv 72.

The Sav m/43 is armed with the 7,5 cm kan m/02, an older and weaker 75 mm field gun compared to that used in the Ikv 72. It has wider traverse arcs and higher maximum elevation, but less gun depression than the Ikv 72, though still quite good at -10 degrees. It starts off with the unremarkable slpprj m/40 uncapped AP shot, which is adequate against most opposition it may encounter but tends to suffer ricochets against sloped armour. However, once upgraded, the gun may fire the slpgr m/39 uncapped APHE shell and the slpprj m/40B APBC shot. The former round has a very lethal 260 g TNT filler but tends to ricochet more and has less penetration, while the latter has better penetration and ricochets less, and is thus more useful in uptiers. It is recommended to carry a mixture of both APHE and APBC unless the Sav m/43 is top tier, in which case the APHE alone is sufficient.

The Sav m/43 (1944) is a more forgiving alternative to the Ikv 72. Like the Ikv 72, it performs best in a hull-down position, as it can use the depression to present a steeper angle on the frontal armour to increase its effective thickness. It has a relatively weak armour from the sides, top and rear, even if less vulnerable than the Ikv 72. It is best to play this vehicle cautiously since it has a slower manoeuvrability than the Ikv 72.

The armour on its own is adequate enough to survive most hits to the frontal armour at this battle rating, but leaving its side and rear exposed to enemies will make a quick work of it. Hence, it's a good support role vehicle to help allied vehicles by either finishing the enemies off or drawing attention to itself with the frontal armour so other allied vehicles avoid being targeted. Against heavier armoured vehicles or just vehicles with better guns such as M3 Lee and B1 ter, it's better to avoid direct confrontation and not fight on equal terms.

While the gun is quite adequate against most enemies at its battle rating, it can be seen obsolete in uptiers where it will face opponents with considerably more armour. The gun might not be efficient in an uptier but it can still do damage if resorting to ambushing and shooting from hills, using the angled armour and the depression of the gun to its advantage. It can lock down areas and buy time for allied tanks to come to its aid doing flanking manoeuvres. The Sav m/43 (1944) can also move around to flank heavier armoured vehicles, getting to their side armour will give it a chance to penetrate and the ability to disable the better protected tanks when frontal engagement is not a viable option.

M4A3 (105) - The M4A3 (1059 is a dangerous vehicle for the SAV m/43 (1944) to encounter, angled armour making the shells of the Kan m/02 next to unusable against its angled frontal armour. It also got a gun with a HEAT shell that will make quick work of the Sav's armour and most likely detonate the ammunition or knock out the crew if it gets a good shot on the Sav. Best to stay away or ambush it where it shows off its less armoured and flat side armour.

B1 ter - The B1 Ter has an armour thick enough that it can ignore the penetration capability of the SAV m/43's rounds, lacking in firepower compared to vehicles like M4A3 (105) or M3 Lee, it can still do quite the damage with the 47 mm gun in the turret. Best way to eliminate this type of target is to either hit the less armoured turret or get a hit in the flat armoured rear.

M3 Lee - Similar to M4A3 (105), the M3 Lee's armour can prove to be quite resilient against the SAV m/43 (1944)'s shells forcing it to avoid the direct confrontation with the M3 Lee. The Lee is not just a well armoured medium tank, it also got a 75 mm anti-tank gun and a 37 mm gun in a turret which can prove to be efficient against the SAV m/43's armour. Making it a lethal opponent to face aswel, where the best chance is to catch one off guard on the side or rear and attack the weaker side or rear armour.

In March of 1940, Sweden ordered about 90 TNH tanks (known as the Panzer 38(t) in German service) from ČKD, but Germany, which had occupied Czechoslovakia in 1938, confiscated the tanks for its own use as the Panzer 38(t) Ausf. S. Sweden still needed the light tanks, and after negotiations the Swedish manufacturer Scania-Vabis was allowed to produce them under license, and compensation for the lost tanks. Sweden ordered 116 Strv M/41 SI in June, 1941, and in June of 1942 Sweden ordered 122 Strv M/41 SII. The last 18 Strv M/41 SII were built as the Sav M/43 in 1944. Another 18 Sav M/43 were purpose-built afterwards. The Sav M/43 was a casemate assault gun made by removing the turret of the Strv M/41, and adding a casemate superstructure, initially housing a 75 mm gun. The 75 mm gun was replaced by a 105 mm M/44 Bofors cannon. The Sav M/43 served in artillery units until 1951, when they were given to armoured units instead. They served until 1973.

In 1942, Sweden began developing a new SPG built on a modified chassis from the Czech LT vz.38, better known as the Pz.38(t) in the German army. This new SPG was supposed to be equipped with the 75 mm L/31 cannon that was already in production. By autumn of 1942, a wooden model of the planned vehicle had been created and, after a number of improvements, the project advanced to manufacturing prototypes. Exactly one year later, in October of 1943, testing began. The SPG passed with flying colours and hit assembly lines under the designation Sav m/43 (short for "Stormartillerivagn", Swedish for "assault artillery carriage"). A little later, a version with a 105 mm gun came out, and, by the end of 1946, all m/43 SPGs had been re-equipped with this new cannon. The Swedish army had used this SPG until the early 70s. From the moment it entered military service until the end of the Second World War in Europe, the Sav m/43 vehicles were grouped by the Norwegian border and then assigned to infantry units as fire-support vehicles when the army was reorganised.