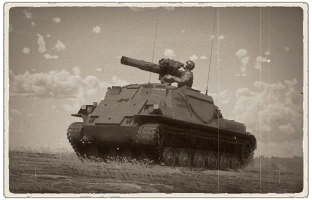 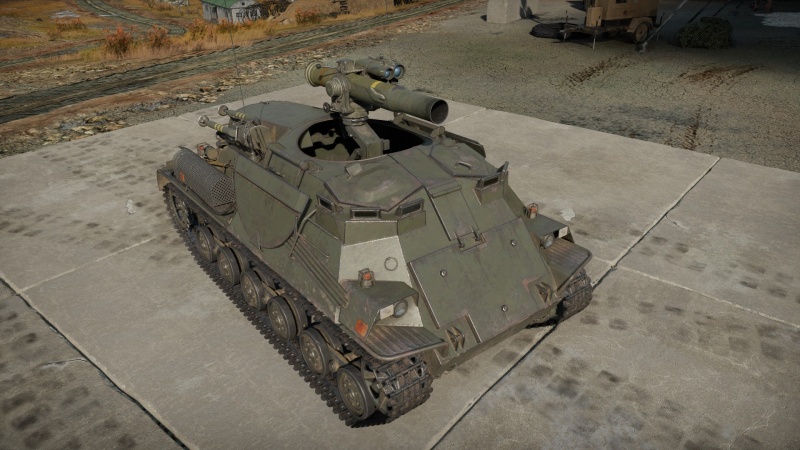 The thickest plate on the UDES 33 front is 18.5 mm, and all armour plates are rolled homogeneous steel. However, the sides are only 7 mm thick, meaning that the hull will not stand up to anything, not even LMG or distant artillery hits. The sides will also detonate light tank APHE on glancing hit. 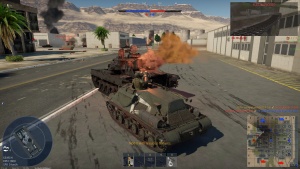 Self-control is required in a street battle, but it is possible to hide behind an ally (or their husk) to deny area access for a while

Due to the lack of a roof, survivability is very poor. Furthermore, the gunner is completely exposed from the waist up. Not only that, but he is standing right next to the rest of the crew, so it is possible to take out everyone by shooting him with HE-I, making even random hits from SPAA fatal. Due to the open-topped nature of the tank it is ill-adviced to directly attack any HEAT or HEAT-FS armed sniper tanks (like the Leopard 1), as they are basically expected to use it all the time and have zero tolerance for ATGM carriers.

Since the armour cannot be relied on, the stealth and terrain compatibility is all the UDES 33 has. In a straight fight, the hull can be hidden behind any medium tank hull or a rock, the gunner is standing on the left side and can be hidden behind tank turret or a tall rock. The carrier must attack from behind cover, by only exposing the launcher (going to the right out of cover) without exposing the hull if possible. In that case, only the launcher is momentarily visible and the opponent might not immediately fire MG or explosives at it. In the case APHE or APDS is fired, the gunner still immediately gets knocked out and the launcher is broken, but the carrier might live on and retreat. 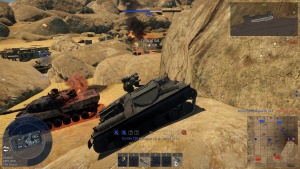 UDES 33 is unwieldy and clumsy, but it can even climb some rocks to attack. Check aim before firing!

The carrier is not too fast and is more in line with a medium tank in terms of speed, which is serviceable.

One of the strong sides of UDES 33 is the 3D mobility. While this is not enough to compensate for visibility mechanics in AB, if used to the limit, it might allow to climb up a tall hill or a rock nobody is currently looking at and cause disbelief in enemy mind for long enough to launch the missile and disappear before getting shot.

The Rbs 55 is a rather weak ATGM in terms of penetration and the reload rate also leaves something to be desired. The ATGM is often blocked by fuel tanks and often cannot even scratch tanks like the T-55AMD-1. The time it takes to reload the ATGM will also allow many of foes to replace their crew members before launcher is ready to fire again. Generally it is best to retreat back into cover if the missile only knocks out an opponent's gunner, rather than dealing sufficient damage to their gun breech or barrel, even if the enemy tank does not have machine guns.

Additionally, the UDES 33 can only carry a maximum of 10 missiles, so they must be used sparingly. Taking a full ammo load is recommended. The speed at which the missile launcher can be aimed at a target is decent, however do not expect to be able to quickly return fire at an opponent should you manage to survive a shot from them. The launcher is restricted in horizontal movement to approximately the 3 and 9 o'clock positions.

Until the "parts" are researched, avoid taking damage to the launcher, as it will be impossible to fire until the launcher is completely repaired - the field repair does not help.

As an upside, the launcher depression allows to aim the missile straight at enemy tanks even at very awkward angles and it isn't impossible to use against helicopters as well. However, most of the tanks at the battle-rating also have roof-mounted MG and should be able to hard counter UDES 33 if they see it first.

The missile starting speed is about 150 m/s, but it will accelerate towards 300 m/s in a second, at 300 m the time of arrival is about 2 seconds, at 900 m it is 4 seconds. This makes the carrier fighting style more long-range centric. 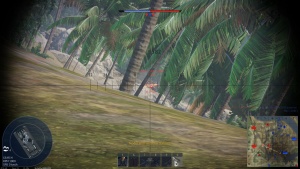 Try to pick off any sniper that isn't paying attention. In AB, You can double down on their tunnel vision by firing from generally impossible spots.

The UDES 33 performs best when using natural terrain cover, as it cannot take any punishment. It is advisable to sit behind the primary lines of the allied team, and pick enemies off when they expose themselves in the distance. Try to get the most out of relatively high ATGM speed - by firing from the sides and changing positions you can maximize the time it takes for enemies to notice the giant fireball flying towards them, sometimes long enough to get hit by them.

It's not impossible to sneak closer to the enemy, but be wary of IFVs and SPAAs (or any vehicle with a high rate of fire), as well as the machine guns mounted on any vehicle, as the gunner is exposed entirely, the entire crew is next to him and the hull armor is very weak. The missile starting speed of 150 m/s also means that almost all light tanks have the upper hand at close range. By hiding behind rocks or dead tanks and quickly pushing the launcher out of cover it becomes possible to sneak a shot in when the enemy is not focused. You will only have one chance of destroying any given tank, as once you miss or fail they will not let you go and will pursue you until you are annihilated, better tankers might even fire back before the ATGM lands on them, resulting in a double KO. However, some heavy tanks have an irrational fear of ATGM and will not push even when they clearly have an advantage, as long as you don't push your luck as well. 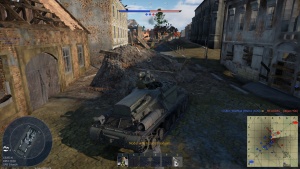 On one hand UDES 33 is a decent ambush tank. On other hand, if you meet one of these and fail to destroy them on the first launch, you become a sitting duck since you can't just trade the gunner to remove it.