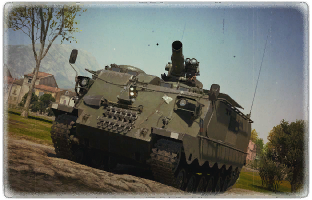 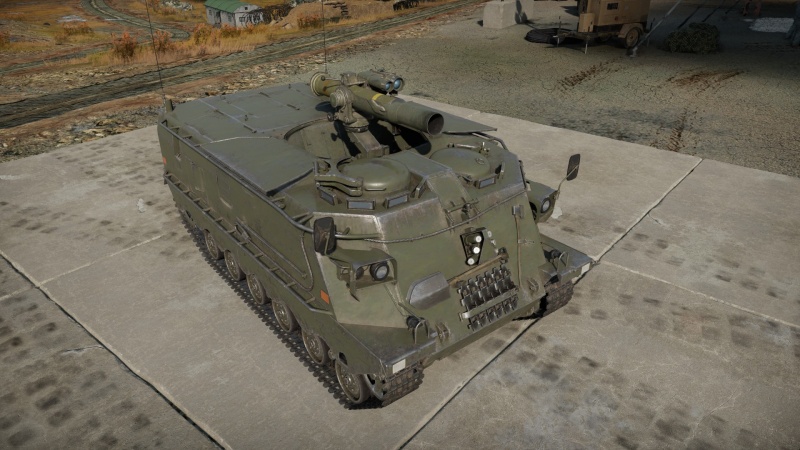 The Pansarvärnsrobotbandvagn 551 is a rank VI Swedish tank destroyer with a battle rating of 8.0 (AB/RB/SB). It was introduced in Update 1.97 "Viking Fury".

The survivability of the Pvrbv 551 is entirely designed for rifle-calibre fire. The chassis is surrounded by plates varying between 5 and 25 mm of thickness, with the front angled to somewhat protect against machine-gun bullets. The Pvrbv 551 is otherwise entirely exposed to all forms of weaponry, and is expected to be kept behind cover because of this. The launcher is external, and fired by a very exposed launcher and gunner. This means the Pvrbv 551 has to put distance between itself and the opponent in order to not get knocked out immediately. Ideally, the chassis should be positioned behind cover, only exposing the launcher itself, making it more difficult for enemies to locate the vehicle.

The Pvrbv 551 features a 136 hp engine giving the vehicle a speed of 38 km/h. This is a general downgrade in comparison to the UDES 33, as the lesser horsepower makes it slower and less torque capable. The engine is also petrol, giving it a very high RPM compared to other vehicles. This makes it pretty loud, and distinct in sound compared to tanks around it. The Pvrbv 551 isn't very good in reverse either, as the transmission only has one reverse gear. The neutral steering is good however, as the missile launcher can't fully traverse. This gives it a very comfortable handling when standing still, something the Pvrbv 551 is meant for.

The Rbs 55 is the same ATGM launcher found on the UDES 33 but gets access to better munitions. The reload time is the same as the UDES so enemies will be able to replace their crew member quicker than your reload. It also gets less ammo, carrying only 8 rounds instead of 10. It is recommended to take a full ammo load as you will definitely run low during an extended battle. The firing angles are more restricted vertically, with only -13° compared to the UDES' -20°. It is horizontally restricted to the 4 o'clock right and 8 o'clock left positions.

However, there is one big upgrade this launcher gets compared to the UDES; the ammunition. It starts off with the potent RB 55B (I-TOW) but can upgrade to the deadly RB 55C (TOW-2). The RB 55B is a good stock munition, being able to penetrate most, if not all, vehicles it faces within its BR range. However, the RB 55C is one of the best ATGMs at its BR range. With 800 mm of penetration, it has the ability to penetrate all vehicles at its BR and more. The slightly higher velocity makes it easier to hit long range targets before they can potentially drive into cover. It's also a Tier II modification so it can be unlocked relatively fast. This makes the launcher one of the most dangerous weapons to face at any range, provided the operator can stay alive, as the gunner is exposed from the waist up on the vehicle. 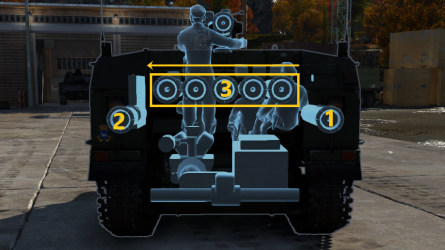 Ammo racks of the Pvrbv 551

The Pvrbv 551 is very situational, as the vehicle requires a secure sightline, preferably with a lot of distance. The Pvrbv 551 can be used in close engagement, when positioned behind teammates. But this is usually at the hope that your team will tank incoming shells for you. Since the reload is slow, and the launcher unable to fire on the move, the Pvrbv 551 struggles to safely engage opponents safely without any cover. When used behind terrain, the vehicle can safely pull back after launching, and can be difficult to hit due to the small profile of the launcher.

Ideally the Pvrbv 551 should be played passively. By making use of the profile, the tank should try to stay hull-down while still maintaining a large sightline. Since the vehicle sports deadly ATGM missiles, the Pvrbv 551 rarely struggles to penetrate from the front. This allows for more creativity, as the vehicle doesn't necessarily need to rely on flanks to deal damage. The vehicle also comes with smoke grenades stock. Although a single salvo, their spread and deploy speed are great, allowing the vehicle to safely retreat without giving the opponent time to react.

In 1983, the Swedish military gave a contract to Hägglunds and Söner to convert Ikv 102 and Ikv 103 vehicles into Pvrbv 551 anti-tank missile carriers. The Ikv 102 and Ikv 103, infantry support vehicles mounting a 105 mm gun, had become obsolete in the past few years. At the same time, the same companies were contracted to convert Ikv 102 and Ikv 103 vehicles into Lvrbv 701 surface-to-air missile carriers. The hull of the Ikv 102/Ikv 103 was plated over, in order to extend the crew compartment the full length of the vehicle. The engine was replaced by a Ford V-6 engine. The armament consisted of a TOW ATGM launcher in the center of the hull, which was raised up through a circular opening in the roof of the vehicle - covered by a two piece hatch - in order to fire the weapon. 55 Pvrbv 551 vehicles were delivered to the Swedish military.

During the 1970's, the Swedish military came to realize that their anti-tank and anti-air regiments within the armored branch were substantially lacking in mobility and protection. As a result, studies were initiated in an effort to find potential solutions to this problem.

During the conducted studies, it was found that the previously decommissioned Ikv 102 and 103 SPG's could relatively easily be converted into mobile ATGM and SAM platforms. This sparked the development of several projects in the late 1970's, all of which aimed to convert the old chassis into modern missile carriers.

By the early 1980's, the viability of this undertaking had already successfully been proven through the creation of several prototypes. However, the decision was then made to not simply convert the old chassis, but to substantially rebuild them in order to facilitate necessary improvements.

By the mid 1980's, the work was considered complete and two new vehicles were developed as a result - the Pvrbv 551 and Lvrbv 701 - the former being the ATGM carrier, whereas the latter represented the SAM variant. Both vehicles subsequently entered service with the Swedish military in the mid to late 1980's.

In total, 57 Ikv 103s were converted into the Pvrbv 551 missile carriers, which served with the Swedish military from 1984 until 2000, when the last of the operational units was retired from service.