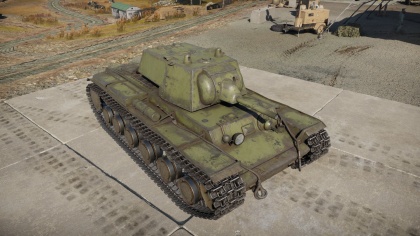 The KV-1 (L-11) is a Rank II Soviet heavy tank with a battle rating of 3.7 (AB/RB/SB). It was introduced in during the closed beta testing for Ground Forces before Update 1.41. The KV-1 L-11 is the first unlockable Soviet heavy tank which boasts raw firepower and armour at the cost of mobility.

The first heavy tank available in the Soviet branch. Its slow, difficult to maneuver and heavily armoured, and mounts the same gun of the T-34 1940, sharing its awful penetration. In Rank II battles, this tank is very difficult to penetrate so you can lead the assault and absorb shots that will easily destroy your lighter and better armed teammates. Its better to prefer short-range engagements and you must aim for weak spots, but your best weapon are other players, so act like a steel wall and cover other tanks with better guns.

First thing to know about the tank, just because its an heavy tank does not mean you should charge headfirst into the enemy. While it may look intimidating as you watch the enemy's shells deflect off you as you move slightly forward to their front lines, you risk getting flanked as moving forward just gives the enemy enough space to get around and hit you in the vulnerable rear area, or get close enough to try catching your turret ring and destroy each of your crew from there. Despite the 75 mm all-aro und armour, don't think for a second that you are invulnerable and play smart still.

Never charge into a KV-1 unless you are also playing as a heavy tank. The L-11 is a low-quality gun, but nonetheless can do devastating damage at short range. As a light tank, medium tank, or tank destroyer, always sneak around the KV-1 and get in shots from the back or side. It is not advised to engage with a KV-1 at all if you are playing as an SPAA.

As a heavy tank, if your gun is capable of penetrating the front of the KV-1's frontal armour, aim for the lower middle of the upper glacis, where the large ammo rack is located. If the shot penetrates, it almost guarantees a destroyed KV-1 as the ammo rack is very large.

As a light tank, medium tank or tank destroyer/SPG, use the advantage of cover (building, hill, trees, etc.) to flank or get behind a KV-1. It will be hard-pressed to turn quickly enough to angle its near-impervious frontal armour towards you. If you are not confident in your gun's ability to deal significant damage to the engine block or ammo racks, it is advised to fire at the tracks and disable the tank before rushing up to it and firing directly at the back. Firing at the back of the turret is also an option to attempt to hit one of the ammo racks on either side. However, smarter drivers will empty their turret of ammunition, so firing at the turret will not always work.

As usual, Parts and FPE first. Tracks is a good additional choice, a frequently targeted module. Also, it increases your turning capability a lot. After these, research Adjustment of fire and Brake System, because the accuracy of the L-11 cannon is slightly increased, even though it is still subpar. Suspension is useful for firing on the move, something particularly useless for a slow heavy tank. Braking quickly and being able to fire a more accurate shot proves to be much more efficient. The BR-350SP does not see any use. The small gain in penetration is offset by the lack of any HE filler and the round should be ignored entirely. Afterwards, all Tier III & Tier IV upgrades are equally useful.

During the developmental progress, the prototypes of all these heavy tanks were made and the Winter War with Finland was on its way. The Soviets sent these tanks into Finland for combat testing, to which the KV design outperform in every way with its superior armour and firepower. The armour on the KV tank was impenetrable by an tank cannon in service and most anti-tank guns as well, the 76.2 mm cannon also gave it a huge firepower boost compared to the usual 37 mm in use by other countries. However, the design was found to be difficult to steer, the transmission was unreliable, ergonomics was poor and vision was limited, plus with its 45 ton weight, it was a very heavy tank for its time. In truth, while formidable in power and protection, courageous crew member willing to curse the name would speak out about the trouble the KV tank really was. The main variant of production before World War II broke out was the KV-1 model. The first model production were equipped with the L-11 cannon, but this was deemed insufficient in performance and was later replaced in subsequent production models by the improved F-34, or the ZiS-5 cannon.

When Germany invaded the Soviet Union in 1941, the Red Army had 508 of the KV tanks. This shocked the German forces as their anti-tank and tank forces had few weapons capable of defeating it, having to rely mostly on the 88 mm Flak guns and the 5 cm Pak 38 with APCR rounds. But by 1942, Germany fielded large amounts of long barreled 50mm and 75mm cannons in both tanks and towed format, making the KV lose much of its armour advantage.

Perhaps the most famous moment of glory for the KV-1 was at Krasnogvardeysk near Leningrad on the 19th of August 1941 when 5 KV-1s, led by Lt Zinoviy Kolobanov, ambushed the German 8th Panzer Division (a light panzer division consisting mainly of panzer II, III and 38(t)). But there are some contradicting stories about what happened, and even if it indeed did happened. One story that supports the claim goes like this: each of the five KV-1s were hiding at different locations, came out one by one to fire at the incoming German tanks, then retreat before the next tank could come out. This boxed an entire tank and ended with 43 tanks destroyed before the KV-1 tanks retreated from running out of ammo, all in a span of about half an hour. During this battle, one of the KV-1 tanks was struck 135 times with no penetration. For their feat, Lt Z. Kolobanov and a few officers were decorated the Order of Lenin and Order of the Red Banner.

The KV-1 continued to serve until the end of the war, though in dwindling numbers as they were lost due to mechanical failures, combat, and being superseded by more modern tanks. Some KV-1s built in 1941 still saw service in 1944 at the Leningrad front before being replaced by IS-2 tanks, then they saw service in Manchuria in 1945 before retired altogether in the end of World War II.

Many variants of the KV tank would be produced in the span of World War II as the Soviet try to keep it in production as long as possible, the initial version was called the KV-1 and remained most part as the main Soviet heavy tank for the first part of World War II. A bunker-buster variant mounting a 152 mm howitzer after experiences in Finland brought the monster KV-2 assault tank, which is very turret heavy that it must be on a flat surface to properly rotate. After complaints of its mechanical issues and lack of performance compared to the lighter T-34 medium tank was heard, the factory lightened the tank in 1943 and designated as the KV-1S which presented some good features into the tank like a commander's cupola. But the KV-1S introduction was a little too late as then the better German tanks such as the Panther tanks could knock them out with ease. An attempt to up-gun the KV-1S was to give it the 85 mm D-5T gun then in use on the SU-85. This variant was called the KV-85. Though it was seen favorable for a nice increase in firepower among the armoured forces, soon even the lighter T-34 began mounting the 85 mm gun as the T-34-85. It was determined that the heavy tank would have a much bigger gun than the medium tanks, but at the time the KVs were falling out of favor in preference to the newer IS-1 and IS-2 heavy tanks coming into service, which were based off the KV-13 prototype tanks developed in 1942 as a medium tank.