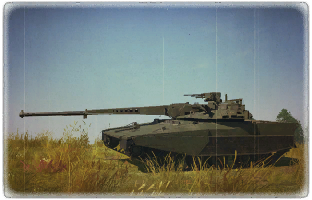 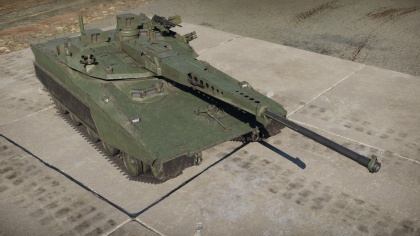 The HSTVL was a "concept" or test vehicle of advanced systems and armour. The Army was interested in newly emerging technologies and their application to light combat vehicles increased, the Defense Advanced Research Projects Agency (DARPA) funded the development of a 20-ton, high-survivability test vehicle (HSTV-L). The HSTV(L) prototype was completed in 1980 with a crew of 2 or 3, the HSTV-L was a full track and powered by a 650-hp gas turbine engine coupled through a special gear box to an X-300 transmission and was mounted the developmental 75mm Medium Caliber Anti-Armor Automatic Cannon, and a highly advanced, variable fire control system incorporating a "hunter- killer" target acquisition capability.

The HSTV-L was developed to allow the Armour & Engineer Board to test a lightweight system which combined all the features necessary to make it an effective anti-armour assault or defensive system. Results of HSTV-L testing were combined with the HIMAG and used in future lightweight system requirements such as the Mobile Protected Gun System Program, its testing was more operational than engineering. HSTV-L was a test bed that closely resembled a lightweight armored combat vehicle of the type that might be fielded by the Army or Marine Corps. It would test the ability of two and three man crews to perform their tests in a variety of environments, examine the contribution to target servicing of a hunter-killer fire control system, and gather engineering data peculiar to a lighter weight vehicle (16-20 tons) than HIMAG. HSTV-L also experienced delays in development, delays in hardware and instrumentation availability were not unexpected. Uncertainties and risks are associated with any high technology endeavor. The vehicle did not enter service but was further developed in to the RDF/LT.