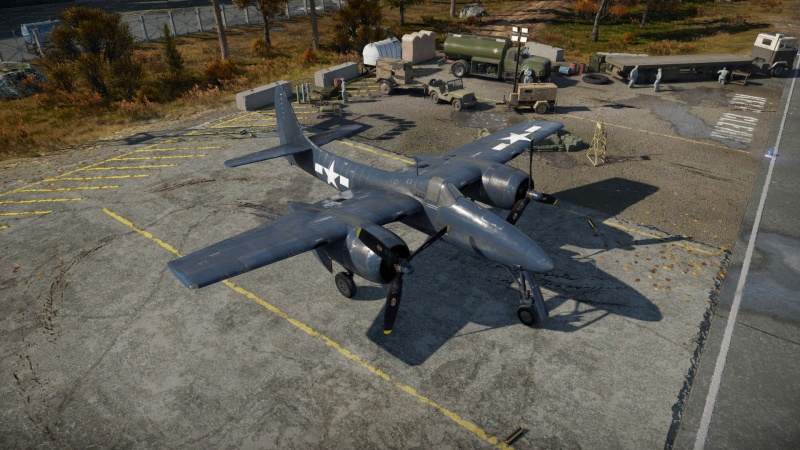 The Tigercat performs decently at medium to low altitudes. It has good firepower and performs well in a dive and can achieve high speeds. At sea level, it has a decent climb but at 3 km the climb rate drops substantially making fighting high altitude fighters in its battle range difficult. It is recommended to side-climb to 5 km and accelerate to a high speed before engaging the enemy. At its battle rating, it will be out-climbed by just about every fighter. The best defensive manoeuvre is attempting to outrun your opponent and engage in head-on engagements. For opponents you cannot outrun, the only hope is to lure them low in a dive where the plane performs better, but you will only be able to make a few turns before you run out of energy so make them count.

WEP on this plane is limited and does not add considerable power until supercharger gear 2 is activated so it is advised not to waste it until you reach about 2,500 m altitudes. At certain low altitudes, WEP actually reduces the engine power. The automatic engine controls will overheat the plane at 100% throttle necessitating the need for manual engine controls to open the radiators. The F7F-1 is difficult to manage and likely contains several oversights in the game that have yet to be addressed.

The F7F-1 can be outfitted with the following ordnance:

The main armament is extremely powerful. Equipped with 4 x 20 mm cannon and M2 Brownings in the nose, expect to knock planes out of the skies frequently. Unlike many other planes that have more spread out armament, the Tigercat packs a massive punch. If one cannon shell hits, the rest will as well. It is recommended that you research "New 20 mm Cannons" and "12.7 mm Ammo Belts", as the Cannon jam quite quickly and the stealth and ground target ammo for the 12.7 mm is far more effective than the default.

Use the armament wisely- do not use the cannon until you are about .5-.6 km from your target. However, the 12.7 mm is great for harassing targets out to more than 1 km. A good hit to the wings of any plane will bring it down, while 2-3 bursts to the fuselage will grind a plane to pieces. The Tigercat's devastating armament is also perfect for hunting down troublesome German bombers like the Ju 288 C.

The F7F-1 also has great late game potential due to its armament. If you aim well, you can take down light pillboxes with short, controlled bursts. Lightly armoured vehicles normally only need 1 or 2 taps. Unlike its event vehicle variant which has vastly better ordnance options, the F7F-1 is average at best in this department. With the maximum load being 2 x 500 lb and 1 x 1,000 lb bomb, don't really expect to take down many hard targets before going back to rearm. The secondary weapons are not recommended for use, as they will reduce performance considerably- also, due to the high BR, jets will exist and will intercept you before you are halfway to your bombing target due to their speed.

By around 1938, the U.S. Navy started investigating into the possibilities of a twin-engine carrier-borne fighter. The contract to develop such a fighter was awarded to Grumman. Quickly thereafter the XF5F was designed. The compact aircraft was to include a 23 mm Madsen cannon, two .50 calibre machine guns, and two .30 calibre machine guns. The Skyrocket test results were not very satisfactory and in 1941 the U.S. Navy moved onto to a new aircraft. The new goal was to create a heavy fighter for its upcoming Midway-class aircraft carriers. This next design was to incorporate two R-2800 engines, four 20 mm cannons, four .50 calibre machine guns, and the ability to carry bombs, rockets, and torpedoes.

The XF7F-1 Tigercat prototype made its original flight on December 2, 1943. The F7F-1 aircraft went into production in April of 1944, but the Midway-class carriers had not yet been completed, so the first Tigercats were given to the U.S. Marine Corp. Only 35 of these aircraft were built until production switched to the two-seat night fighter variant. These were built in limited numbers as well.

The Tigercat came too late to see any action in World War II. Late-model Tigercats did eventually see action in Korea with the Marines. The aircraft was eventually retired from U.S. service in 1954.

In 1942, after an unsuccessful XF5F Skyrocket (and XP-50, its land-based modified variant) project, Grumman Aircraft Engineering Corporation began work on an improved aircraft using the same twin-engine concept as the Skyrocket, which they named the XP-65. It was only a year later, however, that this project was cancelled, and Grumman began work on an entirely new plane based on the XF5F concept. This plane was intended to be operated from new, large Midway-class carriers (the first vessel being the USS Midway, which was commissioned in 1945) and Grumman had two main goals in sight – the plane would have ground attack capabilities, and it would be able to outperform and outgun any other fighter of that time. The maiden flight of the prototype, titled XF7F-1, occurred in December 1943, and was rushed into production in 1944 under the name F7F-1 Tigercat, continuing the Grumman's tradition of giving planes "cat" names.

The Tigercat was designed for two things – speed and firepower. The first of these was achieved by the combination of its sleek hull and two massive 18-cylinder Pratt & Whitney R-2800-22W Double Wasp radial engines, producing 2100 horsepower each. With these power plants, the Tigercat was able to achieve a maximum speed of 700 km/h (435 mph) at an altitude of 6706 m (22 000 ft), and had climb rate of more than 1,372 m (4,500 ft) per minute. It was nearly 114 km/h (71 mph) faster than the F6F Hellcat, and Captain Fred M. Trapnell, one of the US Navy's best test pilots, was quoted saying: "It's the best damn fighter I've ever flown!" The Tigercat's firepower was no less impressing. The Tigercat was armed with four 20 mm M2 cannons in the wing roots, and four .50 cal M2 nose-mounted machine guns. Additionally, it could carry up to two 454 kg (1,000 lb) bombs on under wing racks, or one torpedo under the fuselage. It was also the first US Navy twin-engine fighter ever accepted into service, and the first US Navy fighter ever to use a tricycle landing gear configuration.

However, air tests and trials proved that the Tigercat was simply too overpowered for Midway-class carriers. Its landing speed was too high and it suffered instability in single-engine flight. The arrestor hook design was also proven to be unreliable. As a result of these multiple issues, the Tigercat was then assigned to be used as a land-based fighter in the US Marine Corps service. Deliveries started in April 1944, but problems with carrier operations clearance and changes in its operational requirements caused significant delays. As a result, the Tigercat was too late to participate in World War 2, and only 34 aircraft of initial F7F-1 versions were made. Tigercats eventually saw combat at last, but no sooner than during the initial stages of the Korean War, where F7Fs managed to shoot down two North Korean Polikarpov Po-2 biplanes. Subsequently, due to the development of jet fighters, Tigercats were phased out of service, with the last of them retiring in 1954.