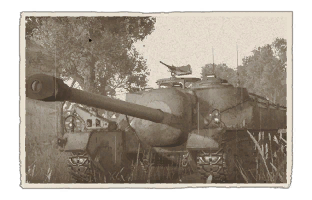 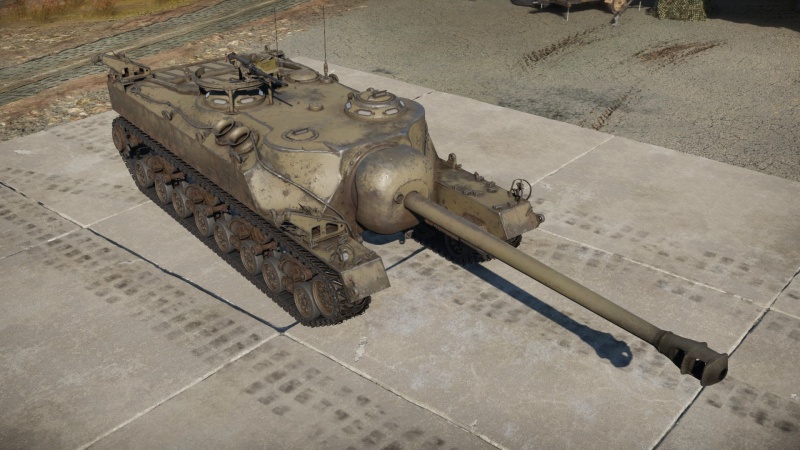 The Super Heavy Tank T28 is a premium rank IV American tank destroyer with a battle rating of 6.7 (AB/SB) and 6.3 (RB). It was introduced in Update 1.49 "Weapons of Victory". A premium version of the T95, its difference is the removal of the outer tracks for train transport, but it can still fight at the expense of increased ground pressure. The T28 retains the same front armour and 105 mm T5 gun from the T95.

Don't try to engage the T28 from the front as it is virtually impossible to penetrate it from the front. Try to knock out its tracks and flank it since its side and rear armour is next to nothing compared to its frontal armour. This tank is also extremely weak to aircraft due to weak armour on top, so another idea may scout out this tank in a light tank or TD, then an aircraft can destroy it from above. 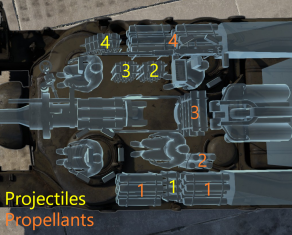 Ammo racks of the T28

When playing the Super Heavy T28, you will immediately notice the slow speed, as well as its odd-looking appearance. The front is very heavily armoured, with negligible armour around the sides, the rear and roof, which makes it an easy target for an artillery strike. There are two ways to play this tank: defensively or offensively, as each play style will have some positives and negatives.

When playing offensively, you need to use the terrain for cover and objects for additional protection. The T5E1 cannon is very accurate at long ranges. However, fighting in urban zones such as streets is not recommended unless you can be sure that there are no enemy units waiting to prey on your weak sides and rear armour in the adjacent streets. If they realise that you are a T28, they might try to de-track you. If you have a moderately trained crew, you will have no issues repairing the track in a short amount of time. To get the best out of this tank, you need to capitalise on the map and the thick front armour. Do not expose your rear or sides! Failing to do so will lead to an early end of your match. The most obvious weakness is that the T28 has no turret, meaning in Close Quarter combat any mobile tank like the Panther might flank you. One way you could get around this is to have teammates stick with you, or for you to follow your teammates. However, the speed of this tank negates the benefits of having turreted allies with you.

The American solution was a vehicle that would be called the T28 Heavy Tank and work began on such vehicle in September 1943. The initial vehicle concept called for a casemate design with a 105mm T5 gun, which was evaluated to be "extremely effective at reducing heavy fortifications". The only other armament on the vehicle would be a .50 cal machine gun for use by the commander. The armour on the design was 203 mm at first, but in January 1945 the head of Ordnance worried about the effect of German APCR ammunition, and so the already significant armour was upped to an astounding 305mm thick frontal armour, at the increase of weight to 95 tons. The vehicle's electric drive was a carryover from the M6 and T23 tank, with the engine the same from the M26 Pershing (which was the same as the M4A3 Sherman). The heavyweight with the underpowered engine allowed the T28 to reach a whopping 8 miles per hour speed. To carry this design, the vehicle had four sets of tracks, two on each side, 328 mm wide each in order to lower ground pressure. For transport, the extra set of tracks on the sides can be removed to make the vehicle thinner (4.55m to 3.15m) for easier transport, but raising ground pressure (0.82kg/cm2 to 1.14kg/cm2) and reducing armour since the detached track sets comes with 102 mm skirt armour.[1]

The T28 heavy tank continued with the development and in March 1944, the U.S. Army gave it the name and also placed an order for five pilot models for testings. In March 1945, Ordnance then renamed the T28 into the 105 mm Gun Motor Carriage T95 due to the lack of turret for a "tank" and any regular secondary armaments. Then, in June 1946, the vehicle was renamed again to the Super Heavy Tank T28 due to the United States construction of self-propelled guns being lightly armoured, in order to distinguish it as a radically different design than simply a "tank destroyer". Today, the T95 and T28 naming are both used to title this vehicle.[1]

The five pilot models requested by the U.S. Army had Ordnance look for a manufacturer to produce these vehicles. The war effort had made many prominent manufacturers busy with pre-existing orders. The Pacific Car and Foundry Company were then contracted to produce the design, with production starting in March 1945. The complete tank design was finished by August 1945, by this time the war had already ended in Europe three months prior. Efforts continued on the tank until the surrender of Japan in September, ending World War II. The post-war cutbacks led to the request for five tanks lowered to just two. The first T28 prototypes appeared in Aberdeen Proving Grounds on 21 December 1945, with the second arriving on 10 January 1946. These two prototype tanks went through evaluations at Aberdeen and Yuma Proving Grounds, mostly for engineering tests to check the durability of the components used. The second prototype model had an engine fire in Yuma and had to be scrapped. The T28 project finally ended on October 1947 when development for such heavy vehicles stopped. Records on the sole T28 prototype ended afterwards, many assumed the vehicle was destroyed or scrapped.[1]

In 1974, the sole remaining T28/T95 prototype was found in the fields behind Fort Belvoir, Virginia by a wanderer, rumoured to be a farmer out hunting or a lieutenant conducting inventory inspection. To this day, no one is certain how the T28 tank was left abandoned in the fields or what happened during the years in absence. It was moved to the Fort Knox, Kentucky to be displayed in the Patton Museum of Cavalry and Armor. Today, its resting place is in the National Armor and Cavalry Museum in Fort Benning, Georgia.[1]

In the end, the super heavy tanks designs made by the Americans (T28) and the British (Tortoise) only proved that such needs for tanks were unnecessary. The Siegfried Line and other such fortifications were taken out by use of the standard issued medium tanks such as the M4 Shermans, proving that affordable, mass-produced vehicles could dominate the modern battlefield. The super heavy tanks were also a strain on battle operations, as one of the most pressing questions during the development of the super-heavy tanks were on just how to get the tanks across the ocean to Europe and supply them with the fuel and ammo. The only positive note that these heavy tanks provided was that it showed the true extent of American and British industrial capabilities, being able to produce these massive monsters.

The T28 super-heavy tank was built following the Artillery Department's initiative starting in September, 1943. The installation featured significant frontal armor and was equipped with a new 105mm gun. However, the power train was borrowed from the M26 medium tank, which led to serious problems with the 60-ton SPG's maneuverability.