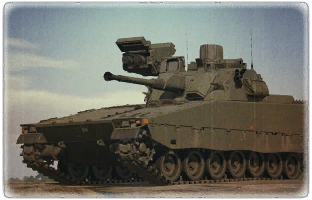 The Stridsfordon 9056 is a rank VI Swedish light tank with a battle rating of 9.7 (AB/RB/SB). It was introduced in Update "Starfighters".

The Strf 9056, like the other non-upgraded CV90 vehicles (CV90105 and CV90120), has little armour, and low protection against hits. The basic armor plating can resist 12.7 mm/.50 BMG projectiles at range, but the armor is not to be depended upon and is only helpful with lucky positioning. It can resist some aerial attacks and artillery fire, but remains extremely vulnerable against incoming enemy fire.

As the Strf 9056 lacks the add-on modular armor of the 90C variants, it has a noticeably lighter feel on the move. The low weight combined with high-output Scania engine leads to an agile and swift moving vehicle, able to do sneaky flanking maneuvers and capable of climbing steep hills to get into ambush positions. When played right, the Strf 9056 is quicker than the Strf 90C, and is able to surprise enemies by showing up in unexpected places.

The Strf 9056, like the two other Strf 9040 variants (The Strf 90C and Lvkv 90C), is armed with a Bofors L/70 40 mm anti-aircraft gun repurposed as an omnipurpose (anti-tank, anti-aircraft) gun. The automatic cannon boasts a rapid fire rate, a magazine holding 24 shells, and a complete maximum load of 234 shells. The gun's internal 24-shell magazine is quickly replenished, and is usually enough to deal with both enemy armour, helicopters, and airplanes. It does however carry a risk of surprising the player by running empty - thanks to its high rate of fire. The shells carried are the same as on the Lvkv 90C - the spårljuspansarprojektil m/90 (APFSDS-T), spårljusspränggranat m/90 (HE-T), and kulspränggranat m/90 (HE-VT). The former two are stock shells - the latter is unlocked through research, on the 2nd tier for an RP cost of 18.000, and has a proximity fuze, very helpful against air targets.

The Strf 9056 also carries a 7.62 mm Ksp 39C, coaxial to the main gun, placed in its turret cheek. The most unusual armament is however the Robot 56 "BILL 2 - Bofors, Infantry, Light & Lethal". The dual-missile launcher, mounted on the right side of the turret, can be devastating to enemy armour behind cover. Its missiles fly above the point of aim, detonating above the vehicle, firing its explosively formed penetrator through the turret roof or engine deck, thus hitting areas with the lowest armor protection. A well-aimed hit can destroy a target in a single hit by igniting ammunition, igniting fuel tanks, or knocking out crew. The missiles do however have a limited range of only 2200 meters, and a relatively low speed of 250 meters per second. Used carefully, the vehicle's load of 8 missiles can easily knock out 8 enemy tanks!