The 120 mm IMI MG251 is an Israeli tank cannon used on their domestic tank designs like the Merkava. Similar to the NATO 120 mm tank cannons, the IMI MG251 can deliver similar lethal firepower with its APFSDS and HEAT-FS round options.

The MG251 is an armament intended for the Merkava tanks. Although sharing the same calibre and able to fire the same ammunition, the weapon is not a license-production variant of the 120 mm Rheinmetall L/44 cannon and is independently designed and produced in Israel.

The MG251 is similar in almost every aspect to the following cannons, except for the ammunition: 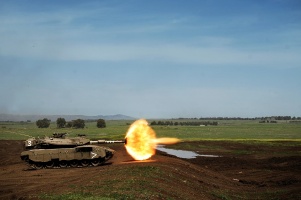 An Israeli Merkava Mk.3D from the 188th Armored Brigade fires off a shot from its 120 mm.

The 120 mm tank armament was developed by Israel Military Industries' (IMI) Slavin Land Systems Division.[1] It made its public reveal in 1989 as the main armament of the Merkava Mk.3.[2]

There are three known variants of the IMI's 120 mm cannon:[3]

The 120 mm guns are compliant with STANAG 4385, which means the cannons are compatible with other 120 mm NATO tank shells.[3]