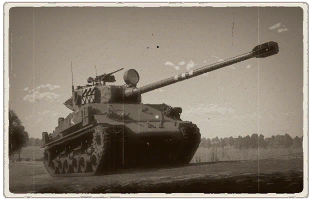 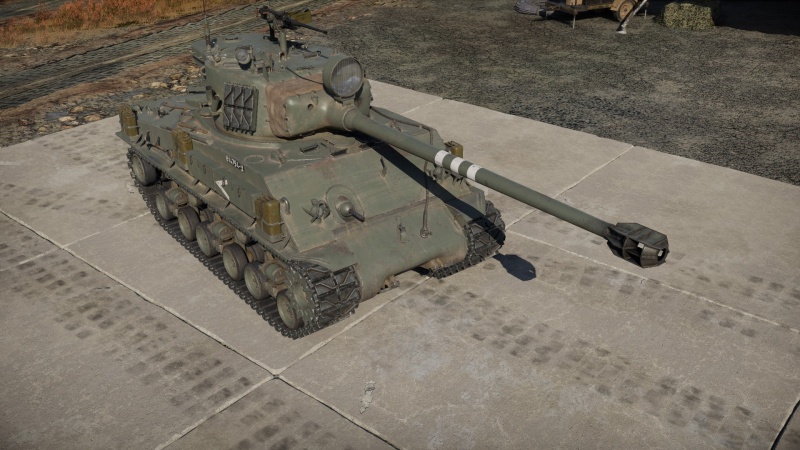 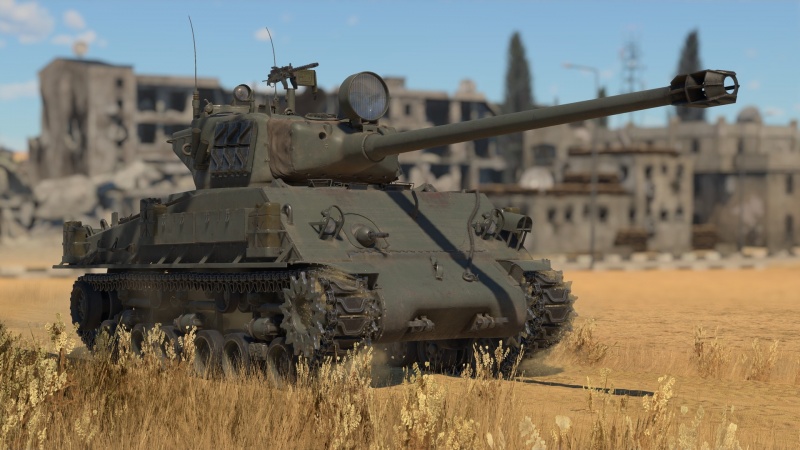 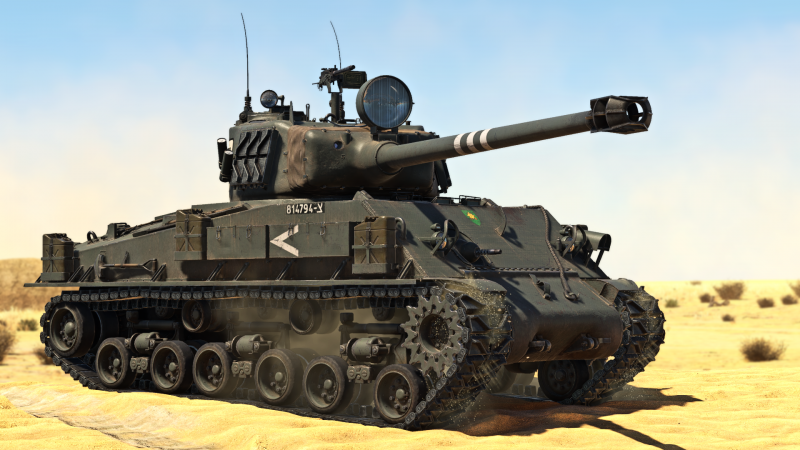 The M-51 (W) is a premium gift rank IV Israeli medium tank with a battle rating of 6.0 (AB/RB/SB). It was introduced in Update "Winged Lions".

The M-51 (W) presents an armament upgrade over the M4 Sherman platform with a 105 mm gun, as well as mobility upgrade with a Cummins diesel engine. However, compared to the M-51 that uses a cast M4A1 hull, the M-51 (W) has a welded hull construction as it was built on a M4A3.

While the Sherman had decent armour for its time, its armour will be penetrated by most enemies it will face at this rank. That's why you should adopt a playstyle similar to the Pz.IV F2: rely on your gun and mobility and keep distance between you and the enemy vehicles.

The M-51 (W)'s mobility is respectable. While the vehicle's top speed and acceleration lags behind contemporary vehicles, it can still allow the vehicle to perform in a somewhat-satisfactory manner as long as it is not expected to win races.

Reverse speed remains a common problem in the M4 Sherman platform, with the M-51 (W) only able to reverse at -5 km/h. So when firing from a position, be aware of the reverse speed in order to afford the M-51 (W) enough time to duck behind cover before enemy tanks can attack back, or instead push forward into cover to make the most of the forward speed available. 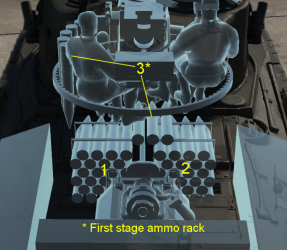 Like most other M4 Sherman platforms, the M-51 (W) contains a standard coaxial machine gun, and a pintle-mounted heavy machine gun. Both remain useful for harassing low-flying aircraft and defeating lightly-armoured vehicles that may not warrant a 105 mm round.

The M-51 (W)'s weaknesses should be recognized first. Its survivability after a first hit is poor as the M-51 (W) is built on a M4A3 hull with no substantial armour improvement. As such the front armour array has poor protection against the kind of armaments the tank is expected to go against. What is also not helping is the tank's relatively slow speed, which makes travelling from cover to cover a longer chore. Combined with the tank's large profile with the Sherman hull body and the long 105 mm gun, it would be relatively easy to spot an exposed M-51 (W) from a distance and destroy it. Another drawback is the ammunition composition available, with only chemical-energy shells (HEAT, HE, Smoke) available. This means that the gunner must ensure there is no light cover or foliage that would detonate the shell before it can reach its target.

However, noteworthy characteristics of the M-51 (W) for its favor is, of course, the armament. The large 105 mm gun is capable of delivering a HEAT shell a distance away. This allows the tank to attack targets of its choosing without regards to penetration drop-off with distance. The turret also has a reasonable traverse rate and elevation ranges, allowing for quick target responses and use in different terrain and hills.

With these considerations in mind, the M-51 (W) would excel in the "sniper tank" or "ambusher" role. Play these roles in the defense as the M-51 (W) does not have great mobility to get to certain locations before the enemy will. Instead, allow the enemy to roll into the M-51 (W)'s field of fire closer in the friendly team side. Set up the M-51 (W) in areas covering known enemy advances towards the objectives, their transit in between objectives, or their movements into friendly front-lines after capturing the objectives. Good fire zones can be established with the 105 mm's HEAT round, using the generous gun depression angles for hull-down locations to use terrain as cover. Alternatively, one may also exploit the M-51 (W)'s height to find rock formations low enough to cover the hull, but also expose the turret to allow the M-51 (W) to fire from behind cover before withdrawing to reload so the enemy doesn't hit and penetrate the turret.

Alternatively, the M-51 (W) may be used as a "brawler" role by getting up close to the enemy. This role is not well-advised due to the M-51 (W)'s weak armour, slow mobility, and average reload speed. However, the tank's gun and turret traverse rate allow the M-51 (W) to be rather responsive in close-quarter combat. Perform this roles with allies, especially those in more dangerous tanks like heavy tanks, in order to reduce the likelihood that the M-51 (W) is the first to be targeted during these attacks. If the M-51 (W) is caught isolated, it will very quickly be torn to pieces. Use the available smoke grenades to make a retreat if needed.

Upon its establishment in 1948, the Israeli Defense Force (IDF) was desperate to set up an armoured corps in order to contend with the multi-pronged Arab invasion. World War II surplus early-model M4 Sherman tanks, many of them already rendered combat-ineffective, were purchased from any European source that would provide them. A significant Israeli repair effort finally managed to get most of these tanks working in time to defeat the invading armoured battalions, ultimately winning the war. The basic M4 remained the IDF's primary tank for more than half a decade, precisely because it was considered obsolete everywhere else and could therefore be purchased en-masse at scrapyard prices. During the early 1950s it was slowly replaced with more advanced Sherman models, whenever those could be acquired.

Unfortunately for the IDF, this situation could not continue for long. Newfound cooperation between the Arab states and the Soviet Union resulted in an influx of T-34-85s into the region, whose armour was very difficult to penetrate using the M4's original 75 mm M3 cannon. It was obvious that the Shermans would need to be replaced in order to keep up with the arms race. Initially, the IDF considered purchasing the new AMX-13 from France (which was rapidly becoming Israel's primary weapon supplier), but the tank was determined to be too lightly armoured. Instead, a number of French CN-75-50 cannons (also known as the SA50 L/57) were purchased separately and installed into the turrets of existing M4A4 Shermans. This resulted in the Sherman M-50, known abroad as the "Super Sherman" and in War Thunder as the M4A4 (SA50).

The M-50s proved highly effective during the Sinai War of 1956, but the lessons of that war resulted in the Soviets flooding the region - particularly Egypt and Syria - with the newest T-54/55, armed with a 100 mm cannon and carrying more modern curved armour. Once again, new French AMX-30s were rejected as replacements for the M-50, but their new CN-105-F1 105 mm cannons proved quite suitable for the IDF's purposes. The Israelis modified these cannons to their own specifications, slightly reducing barrel length and muzzle velocity as well as fitting the cannon with a brand new muzzle brake. This modified cannon would be installed on an M4A1 Sherman hull fitted with a T23 turret (the turret originally used for 76 mm Sherman variants). The tank was then fitted with a number of additional modernization features, including infrared spotlights and a better fire control system.

This new model was dubbed the Sherman M-51, of which 180 were constructed in total. They first saw action during the Six-Day War of 1967, where they often outmatched Syrian and Egyptian T-55s. In combat in the West Bank during that war, the M-51 exceeded expectations even further by thoroughly defeating Jordanian M48 Pattons - very similar to the model that was in the process of replacing the M-51 in IDF service at the time. Despite becoming effectively obsolete by the 1970s, the M-51s were called back into action in 1973 during the desperate situation of the Yom Kippur War, and reportedly managed to hold their own even against late-model T-62 tanks.

All in all, the M-51 is considered to be the last and most advanced version of the Sherman ever produced.