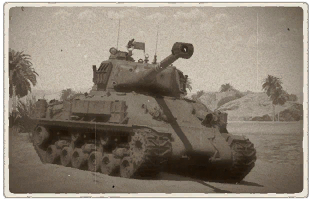 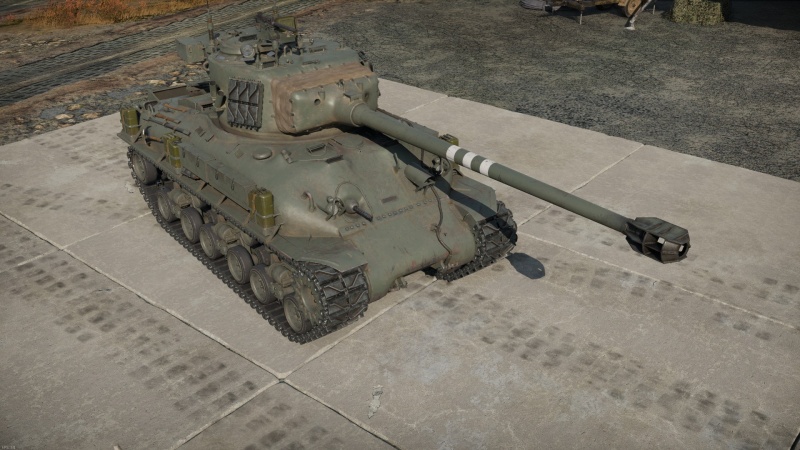 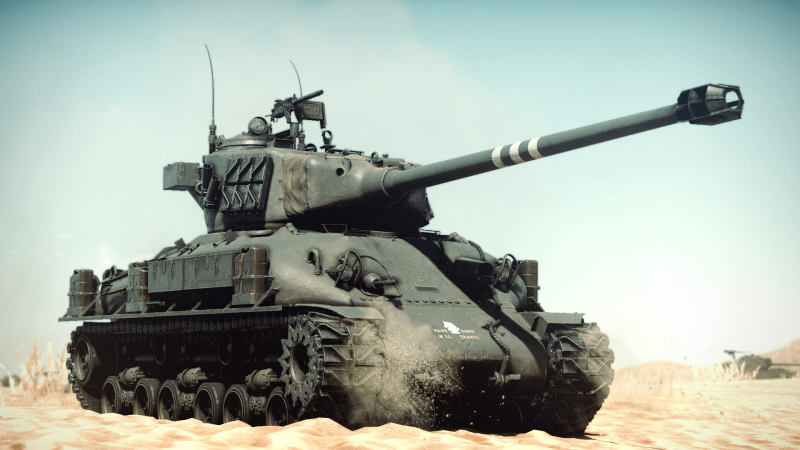 The M-51 is a rank IV Israeli medium tank with a battle rating of 6.0 (AB/RB/SB). It was introduced in Update "Wind of Change". It is the sole "reserve" tank of Israel, therefore, for several battles it is repaired for free and it's possible to spawn this tank several times in a single battle. It looks similar to the M4A1 (76) W, but feels smoother at the edges and has a different weapon.

It's important to know, that even if you gain access to this tank, your beginning crew level is still level 1 (meaning, that you can't even buy expert qualification for the crew), while everyone around has level 30 to 60 and (very likely) an expert training.

The hull armour is mostly inadequate. Almost every popular tank in the BR range can penetrate the tank's front with ease even when it is presented at an extreme angle, short of light tanks and SPAAs. Still, frontal armour can protect the tank from bombs and rockets. The side armour is quite weak and is arguable the weakest part of the tank, as even SPAA can penetrate it at various angles. The rear is technically the best protected side when it comes to hopeless situations - if the opponent hits too high, then shell bounces into tough turret and does nothing; if opponent hits too low, then engine might stop the shell. Unfortunately, tank's awful reverse speed does not allow it to charge with rear forward, so it can only be used defensively.

The turret armour is bad and good. Turret sides are unlikely to protect from anything but 20 mm SPAA, but the front is decent. The gun mantlet actually allows the turret to deflect stray shots and can allow the tank to fight in hulldown position, but the turret's top is not cut off on the "mask" level, but higher. The actual roof is connected to it with 26 mm RHA plate, which is not even angled enough to bounce shells in the first place, and most of opponents in tank's rank are either extremely tall, have angle negating shells, or both. Because of this, if the M-51 is charging into high ground, it is easily destroyed before it can even fire, especially in AB. By keeping distance and vertical angle, the tank can reduce the probability of being penetrated.

Without upgrades, even in AB the tank will never be able to take initiative from opponents, as it accelerates poorly and loses a lot of momentum when turning at low/zero crew level - opponents will always be first to the capture point and almost always will react faster in combat.

With all the upgrades, it is still slower than most of other tanks, but it will feel far less clunky to drive and will more often reach maximum speed. It will also accelerate surprisingly fast, for how it performed before.

Remember, the reverse speed on this tank is only 3-5 km/h, combined with poor hull plating it requires the commander to make decisions count, or to not rely on mobility at all.

The gun fires HEAT and HE with characteristics typical of a rank IV SPG, but its velocity is very close to the default APHE (usually a bit slower), which makes learning curve less strict than it normally is. The tank is also reasonably tall, so HEAT does not lose a lot of power like with the SPG of the rank, which struggle with heavy tanks due to an insane angle of attack. 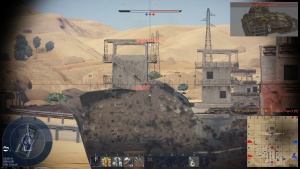 At medium to long range, the minor difference in HEAT and APHE velocity may allow M51 to outplay superior tanks

Gun accuracy is great even without the gun adjustment upgrade and with zero crew experience, but its vertical elevation speed is awful, and the gun is constantly tilted by changes of movement pace, which makes handling it difficult. This makes personal user skill to fire on move without braking a necessity.

The only way to reduce the tilt is to upgrade movement modules, as it reduces the tilt threefold. Due to the low gun elevation speed, the elevation mechanism upgrade is a must have, and it is generally a good idea to pull the gun up before charging downhill, as to not disarm the tank in process, particularly at low crew level.

HEAT shells destroy any tank regardless of its armour. They can be used at point blank range to knock out Panthers with a single shot by hitting their hull straight to the middle. They can also be used in typical HEAT fashion to bombard any enemy 600 m away over a hill, even without direct sight - returned APHE fire will not hit the tank back, since it's generally a bit faster, and even if there is an artillery genius on the other side, the gun mask should be able to handle it.

The HE shell is nice to have. Even if it's difficult to memorize which tank's roofs it can penetrate, the HE can be used to bully sneaky light tanks and beat certain SPGs like the Type 75 SPH. 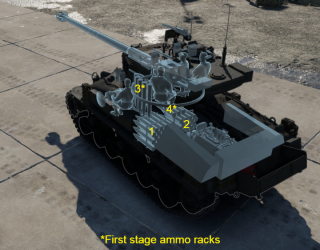 The M-51 has poor armour for its BR, which is why you should never get into a brawl. Even though the overall armour might not be suited for close-range engagements, the hull armour is kind of decent at long ranges but is really good against bombs and rockets. Pick off targets from long range and avoid being spotted so do not hang around in one spot for too long. Your eather thin armour means that you cannot risk taking even a single hit especially from the side as you will be destroyed instantly. Aerial opponents are also a threat.