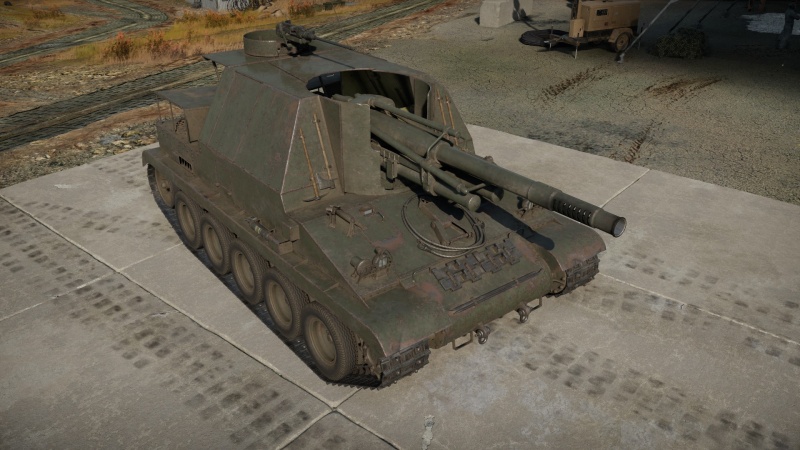 The Lorraine automoteur de 155 mm modèle 1950 (shortened as Lorraine 155 Mle.50) is a premium gift rank III French tank destroyer with a battle rating of 4.3 (AB/RB/SB). It was introduced in Update 1.77 "Advancing Storm" as a reward during the 2018 WW2 Chronicles.

The Lorraine 155 Mle.50 has very little armour (although some are sloped enough to deflect certain low-calibre rounds), and can generally be penetrated by most guns of its rank. Even worse, however, the 'casemate' (if it can even be called that) has very little armour, and in some places can be shot through with machine guns. The machine-gunner (operating the 20 mm gun) is completely standing in the open. Generally, you want to rely on good map placement and mobility, rather than armour.

The roof-mounted MG 151 autocannon is very good at knocking out tracks, punching through lightly armoured vehicles and shooting down low-flying aircraft. Use it sparsely because of its low ammo count. When losing a crew member, the machine gunner is used to replace other crew members, meaning that you can't use the 20 mm cannon anymore.

The best method of using the large-calibre weapon on the Lorraine is to exploit the high-explosive power against thin-armour on the enemy. Like other large calibre HE tanks, shooting below an enemy vehicle will penetrate its belly armour. This is an effective, albeit difficult way to engage tanks whose armour is greater than what your HE shell can penetrate.

Some targets to keep in mind of, and their weak points:

Prototypes of the Lorraine 155 Mle.50 passed trials in 1950, but never reached production.