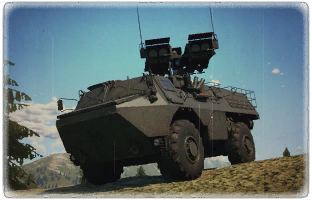 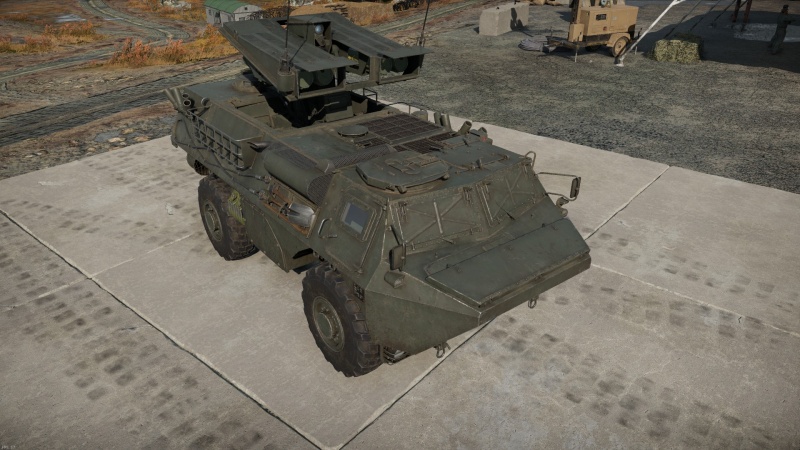 The Véhicule de Combat Anti-Char, MEPHISTO is a rank VI French tank destroyer with a battle rating of 8.3 (AB/RB/SB). It was introduced in Update "Danger Zone".

As with all French wheeled vehicles, the armour is little to none and the MEPHISTO is no an exception. The hull barely has the armour to survive hits from 12.7 mm machine guns and in some places even 7.62 mm. The armour is not to be relied on due to the fact that even artillery fragmentation can pose a significant threat to the platform. However, due to the crew spacing, the first half of the crew being at the front and the other half far behind, both pairs being separated by the engine block, makes the MEPHISTO capable of surviving more than one hit from the side as long as the shot is not placed in the center of mass with explosive filler. However, the best armour is to not be seen in the first place.

The optics are located on top of a pole in the middle, the turret shifts and turns around it. Although the launcher itself is a bit curvy and may bounce extremely inaccurate shots, the pole isn't. The sheer size of the launcher provokes many enemies to use HE shells on it. During reload, the optics remain exposed, so the MEPHISTO requires tall cover at all the times to avoid being annihilated by chemical shells.

The smoke launchers on the MEPHISTO fire in every direction and the grenades explode mid-air, effectively hiding it from anything immediately, allowing the operator to use them as a panic button. They can be used twice.

Mobility-wise, the MEPHISTO leaves nothing to be desired. It is a fast and agile platform with a very high top speed. However, like other wheeled vehicles, it lacks traction in muddy and snowy terrain, draining the speed significantly. While it does not lack a decent reverse speed, it is certainly not the best, it can reach up to 9 km/h. It holds a significantly amazing acceleration and an amazing turn rate as the short length and both axle turn make it capable to do a full 360° turn in ~4-8 seconds depending on terrain. The MEPHISTO is also fully amphibious, meaning it can cross and reach specific places in the maps inaccessible to other vehicles.

HOT ATGM
Two-plane stabilizer
Reduces the swing of the gun in two planes while moving
Autoloader
Automatically feeds projectiles into the breech. The speed does not depend on the skills of the loader
Ammunition12 rounds
Belt capacity4 rounds
Reload15.0 s
Fire rate60 shots/min
Vertical guidance-10° / 10°
Fire on the moveup to 6 km/h
Main article: HOT

The MEPHISTO ('Module Élévateur Panoramique Hot Installé Sur Tourelle Orientable', French for "elevated panoramic HOT launch module on rotating turret") is the primary weapon mount. It is able to fire four HOT or HOT-2 missiles in a rapid succession. HOT missiles are nothing new to French commanders and they have proven to be very capable in combat. It is a similar system as the TUA ('TOW Under Armour') seen in the M901 but with differences. While it is able to hold double the amount of much more capable missiles, the reload rate can be considerably slower due to the slower turret traverse and reload rate. However, the turret will start reloading immediately after launching the last ATGM (preventing it from being a liability as well), as the optics are not bound to it, so it balances out at a long range. Unfortunately, it's impossible to guide multiple missiles at once with this carrier, so it is preferable to hide the launcher behind something during combat.

The HOT-2 is significantly stronger than missiles of light tanks when it comes to penetration, but lacks tandem charge or utility. It will likely still fail to penetrate the turrets of NERA or ERA protected tanks, unless angled into them at the last moment, but anything else has a significantly lesser chance of miraculously surviving a direct hit.

The MEPHISTO has an advantage over some missile carriers, as the missile launcher does not have to be deployed before firing and it, as well as the optics, is two-plane stabilized, meaning it is possible to quickly brake and engage a target without the need of reacquiring the target, or to threaten enemy tank with a missile launch and to continue moving while guiding the shot, unlike with the AMX-30 ACRA. The stabilizer also proves to be beneficial when on water as the waves can make the launcher bounce.

The only reliable playstyle for the MEPHISTO is hull-down. In a battle, this vehicle is best played behind a rock, so that rounds won't dip and hit the main chassis. If this is not possible, try to find a ridge to hide behind or a depression in the terrain. Since your launcher is the only thing exposed, expect for your launcher to get hit and receive a 10-second repair. (Note for stock vehicles, you will still be able to fire). Some players will be smarter and will shoot HESH rounds at you, the splash damage will be enough to either overpressure or knock out the rest of the tank. Since you only have 12 missiles (4 in the launcher, 8 stowed away) you will have to be patient and skilled at using this missile. If in the right hands, it is incredibly strong and can hold an important spot and single handedly deny the enemy any chance of taking an area. This will reward you a large number of targets destroyed as well as gaining a large number of points from people shooting at the launcher.

The Shooting Range #310 - Metal Beasts section at 00:24 discusses the MEPHISTO.