The Obusier de 155 mm Modèle 50 is a French 155 mm 30 calibre howitzer first introduced in the 1952. It was the first artillery piece designed by the French Army since the World War II, around 980 of them were manufactured by France but also under license by Sweden and its Swedish Armed Forces. They were replaced by the TRF1 in the 1980s, but reserves were being made up until the end of 1990s.

The Obusier de 155 mm Modèle 50 is a 155 mm howitzer which was fitted onto the Lorraine 155 Mle.50. The cannon is devastating at any range, due to only being restricted to using HE shells which do not lose penetration power with increasing range, although using it at long ranges will prove to be an issue due to the relatively slow velocity. The projectile are loaded separately from the charges, which also leads to pretty high reload times, being roughly under half a minute.

Since it is a 155 mm howitzer which solely relies on chemical energy to cause damage, as is the case with other large calibre cannons, one should try to hit the belly armor of a tank which will bring very reliable one hit kills. This can however prove to be a very hard task to pull off in some maps or against some tanks. Side shots are way more easier to hit and will cause as much damage as a belly shot would. Another way of reliably destroying tanks would be to aim for their roof mounted MGs or their cupolas, albeit not every tank has a roof mounted MG or a cupola that is easy to hit.

The slow rate of fire is inadequate to be used in closed spaces as it leaves you vulnerable for almost half a minute, but it also isn't very effective at long ranges due to the slow velocity of the shell. User should maintain a medium distance between them and the enemy as it is the most effective range at which the 155 howitzer can engage targets reliably. Another good way of playing it is to find a vantage point or to hide behind a small hill. Because of the somewhat slow velocity of the round, the user can hide behind a small hill and engage targets without the targets seeing them.

But one should avoid trying to scale hills, as the gun depression of -5° will leave them vulnerable and without the option of returning fire.

The 155 mm howitzer was manufactured by France and it was the first artillery piece that the French have designed since the second World War. It was carried around on a carriage in the shape of a double-arrow. It was equipped with a muzzle break with gills and a variable recoil that can perform vertical shooting. Its maximum range was approximately 17,700 km with the French Mle 1965 shell.

The US was interested in Obusier de 155 mm Modèle 50, so after a collaboration between France and Israel in the 1960s, a gun was made to be used with the M-50 which was an open structured self-propelled artillery piece, mounting a single French Model 50 155 mm howitzer at the back of the hull, which was based on the "long" hull of M4A4 fitted with Continental engine. Probably about 120 of these guns were built. 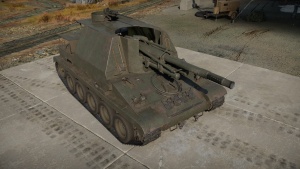