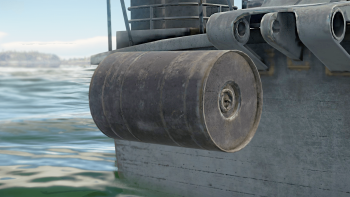 Depth charge mechanics in War Thunder are very basic, being simple, medium-sized bombs deployed from naval vessels. Their area of effect is almost precisely vertically upwards, somewhat alike torpedoes, except depth charges, do not move from their deployed location except to sink.

Tell us about the tactical and technical characteristics of the depth charge. 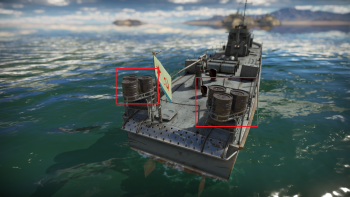 The depth charges produce focused splash damage right above their location, like a vertical torpedo. Although originally they were designed to produce both explosive and shockwave damage underwater to destroy submarines, in War Thunder, there are no submarine vehicles and as a result, the depth charges have a very focused area of effect.

Depth charges require much more skill to serve any purpose in comparison to torpedoes, due to the fact you either have to be very close to the opponent or you have to predict the path the opponents may take.