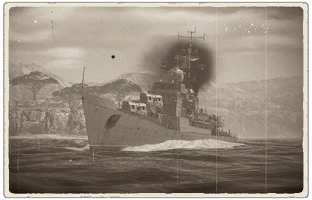 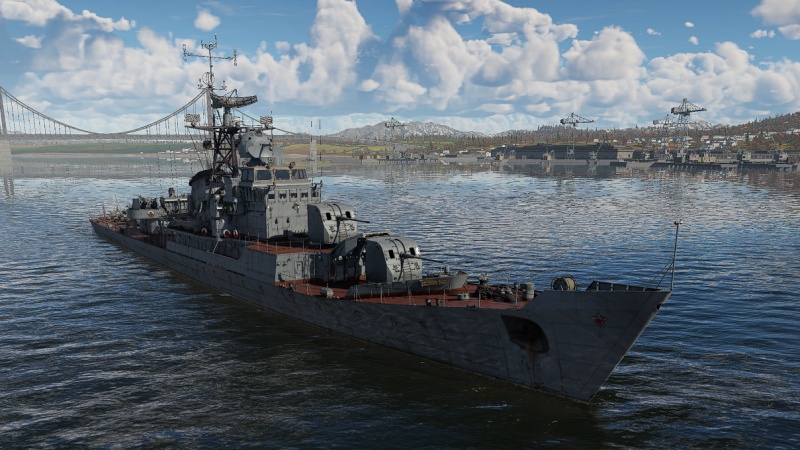 The Pr.50, SKR Yenot is a rank V Soviet frigate with a battle rating of 4.0 (AB/RB/SB). It was introduced in Update "Raining Fire".

The Pr. 50 gets access to three 100 mm B-34 naval cannons which are quite effective against enemy vessels. The weapons fire 15 rounds per minute, which is relatively good for a wepaon of its size, but suffers from a slow traverse rate similar to other Soviet naval cannons. The Pr. 50 gets access to three shells: a standard HE shell, a HE-TF time fuze shell or a HE-VT proximity fuzed shell. Of these, the HE shell is ideal against naval targets while the HE-VT is the most effective against aerial targets.

The Pr. 50 carries two dual 37 mm 70-K mounts for anti-aircraft defence. The 70-K is the standard Soviet anti-aircraft gun and serves as a reliable counterpart to the 40 mm Bofors gun used by the allied nations. This gun is extremely similar to the Bofors as it features a similar design, and fires continuously rather than needing to reload. The guns will eventually jam, but the time it takes to jam the weapons is very long so jamming is not a great issue. The weapon gets access to three belts - default, AP and HE. The HE belt is usually the best belt as it is the most effective against enemy aircraft.

The Pr. 50 gets access to two 533 mm 53-38 torpedoes. The 53-38 torpedo is also found on most Soviet WWII-era destroyers, and is relatively mediocre as far as torpedoes go. In terms of damage-dealing capabilities, the torpedo is decidedly mediocre, having more explosive filler (300 kg of TNT) than the American torpedoes but less than the British and Japanese ones. However, the main drawback of the torpedo is its range - without the “torpedo mode” modification, the 53-38s are restricted to a range of just 4 kilometres, meaning that they are tied for the shortest-range large-ship mounted torpedoes along with the Italian destroyer torpedoes. The torpedo mode modification is necessary for hitting longer-ranged targets, but reduces the torpedo’s speed to just 56 km/h. In general, these torpedoes are a potent weapon against enemy bluewater ships if you can get close enough to fire them. On the Pr. 50, these may be used as a close-in backup weapon against ships that outgun you.