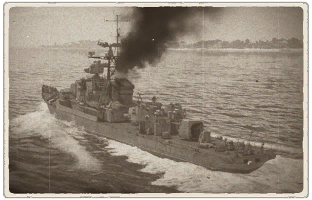 The Pr.50, Karl Marx is a squadron rank IV German frigate with a battle rating of 4.0 (AB/RB/SB). It was introduced in Update "Wind of Change".

The Karl Marx is a squadron vehicle equivalent of the Yenot.

Compared to other frigates, the Karl Marx has better firepower than most with the exception of late Japanese and British frigates. The biggest downside this ship faces is the reload time. Most frigates such as SKRs and the Köln-class will outgun the Karl Marx.

The Karl Marx is best played at a range farther than most frigates. This will give the ship better time to respond to threats and keep it away from heavy enemy fire, almost like a mini-destroyer. Like many frigates, focus on small targets such as boats, then frigates, then destroyers. Do not rely heavily on AA as much as other ships such as the Köln as it traverses terribly and has no HE-VT shells. Instead, use any HE-VT or time-fused shells in advance.

Summarise and briefly evaluate the vehicle in terms of its characteristics and combat effectiveness. Mark its pros and cons in the bulleted list. Try not to use more than 6 points for each of the characteristics. Avoid using categorical definitions such as "bad", "good" and the like - use substitutions with softer forms such as "inadequate" and "effective"