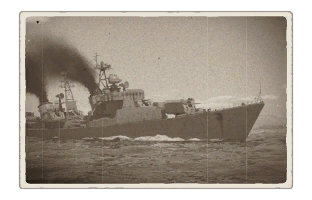 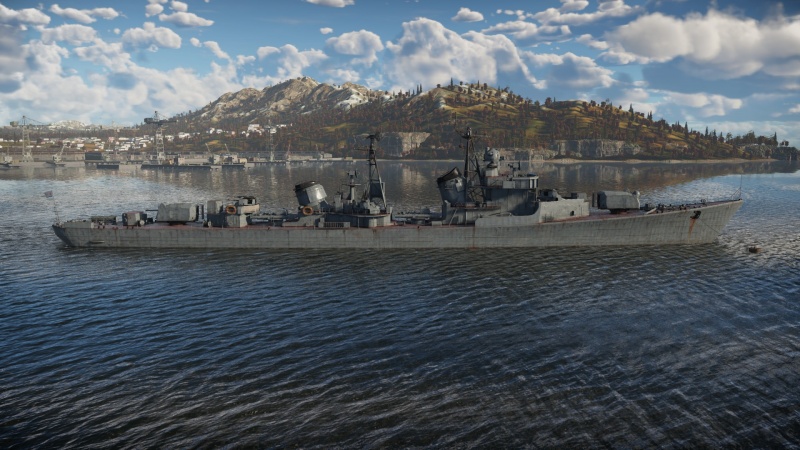 The Pr.56, Spokoinyy, 1956 is a rank III Soviet destroyer with a battle rating of 5.0 (AB/RB/SB). It was introduced in Update "Starfighters".

Like most destroyers, the armour of the Spokoinyy is practically non-existent, the limited anti-frag armour only capable of resisting low-calibre fire and small amounts of explosive fragmentation. The bridge, turrets and smoke funnels have 10 mm of anti fragmentation armour, with the hull itself being completely unprotected.

It is rather difficult to be ammo-racked in the Spokoinyy, at least from the front, as the ammunition is below the waterline. However, the amidships auxiliary ammo storage and aft shell room are poking a little above the waterline, creating a potentially lethal or at least crippling weak spot. When it comes to threats from the air, the Spokoinyy is very weak against bombs as any other destroyer. It is able to resist most strafing attacks with ease, as well as a couple of rocket attacks.

As one of the most modern destroyers in the game, the Spokoinyy has a sleek hull and is equipped with powerful engines, enabling the over 3,000 t vessel to reach a top speed of 71 km/h (88 km/h in Arcade), a more than respectable speed for a destroyer, putting it on par with some of the faster coastal vessels (Albatros, SKR-7, etc). When it comes to manoeuvrability, the Spokoinyy is equally admirable. The ship is able to pull tight turns while retaining relatively high speeds, as well as having fast acceleration and deceleration.

The Spokoinyy is armed with 4 x 130 mm/58 SM-2-1 semi automatic cannons divided into 2 dual-mount turrets. The gun handling is superb. The turrets can traverse and elevate quickly and are capable of firing almost straight up (maximum +82°).

The cannons have access to 3 types of shells: HE, SAPCBC and HE-VT.

The HE shell has excellent filler, at 3.8 kg, useful against coastal vessels and for setting fires on larger ships. The SAPCBC has a rather decent 2.2 kg of filler and 113 mm of penetration at 10 km, recommended for use against medium to large enemy destroyers and lightly armoured cruisers. The HE-VT is an air-bursting shell for use against aircraft, being highly effective in this role. The explosive filler is 3 kg, which is more than enough to tear the wings off the heaviest of enemy bombers. The HE shell has a high muzzle velocity, making aiming at longer ranges much easier.

The Spokoinyy is armed with 16 x 45 mm/89 SM-20-ZIF automatic cannons divided into 4 quad-mounted turrets, capable of shredding apart enemy aircraft. The 45 mm cannons only have access to HE shells, meaning they will do little to no damage to heavily armoured targets. The fast firing rate (0.4-second reload) creates a solid defence against coastal vessels that get too close, but are of mixed effectiveness against aircraft.

The guns are great for tearing apart softer vehicles such as aircraft but AI gunners tend not to be that accurate. As the 45 mm is one of the largest calibre automatic AA mounts, the guns run out of ready-use ammunition distressingly quickly and the AI gunner can often fire at an incoming plane and use up all the ready-use ammo before the plane has even gotten close, leaving you defenceless unless you take notice and manually use the main guns to shoot the plane down instead.

The Spokoinyy is armed with 2 x 5-tube torpedo launchers. With a relatively heavy warhead of 400 kg, these are your main weapon against heavily armoured threats or when attempting sneak attacks at a distance, though you may wish to go into battle without loading them as they present a potential threat to yourself should they be hit and blow you up. Your torpedoes have a max range of 13 km (8 km without torpedo mode) and can be used at almost point blank, though the torpedo must travel at least 50 m to arm.

This is the most universal depth used for all types of engagements. This depth is capable of hitting practically any vessel, including PT boats. The main downside is that enemy ships can see the trail left in the wake of the torpedo, potentially allowing your enemy some time to notice the threat and evade.

This is the recommended depth for attempting sneak attacks on major ships such as cruiser and battleships, as most of them have a draft extending over 4 m below the waterline This depth is setting also has the advantage of potentially being able to hit underneath the belt armour of an enemy, causing catastrophic damage. Only your team will be able to see the torpedo symbol and it will not leave any visible water trail as compared to the 1 metre depth torpedo.

The Spokoinyy can be armed with BB-1 depth charges, originally intended for use against submarines. They are useless in all naval battles. It is not recommended to load them in the ship as they do not have any practical use in game.

The Spokoinyy has access to a Fut-N air/surface search radar and Sfera-56 tracking and fire control radar. The Fut-N is located on top of the mizzen mast (rear mast). Sfera-56 in front of the main mast is located on top of the bridge (refer to picture). Enemy pilots are often unaware of the presence of the radar as they are uncommon in-game, you can use this surprise to your advantage.

The radar system has a maximum range of 150 km, although you'll usually have the maximum set at 10 km during a match because of how close everything is. While the radar system can detect enemy aircraft within the radar radius using the search radar, it can also lock onto an individual aircraft using the tracking radars and provide a firing solution in order to guide either your 45 mm mounts or the main guns when manually firing at a plane, which can be a massive help for sniping aircraft out of the sky with the 130 mm HE-VT shells, though you should keep in mind that the lead indicator given by the radars does not account for the movement of your own vessel, do not forget to adjust for that when aiming. The indicator also doesn't really account for the drop of your shells, so you should aim a little above the indicated lead when at longer ranges.

This radar system can give you a huge advantage with situational awareness, as no plane should be able to catch you unawares in most conditions, though be warned that the radar system can have trouble detecting planes which are at high altitude, since the search radar has a blind spot directly overhead. The tracking radars, by contrast, have no blind spot directly overhead, but a blind spot directly to the rear of the ship, this is what the faded cone represents on the radar display. If an aircraft you have locked onto moves into this cone, you will lose the lock and not be able to apply another one until the aircraft moves out of the cone.

Be aware of radar interference (mountains, trees, tall structures in general), as they will affect both your search and tracking capability.

The Spokoinyy is a Cold War destroyer, excelling in use as a support and anti air ship. The powerful 130 mm shells are able to decimate enemy destroyers and are capable of killing some of the weaker cruisers, in some circumstances. The main guns are also highly useful against aircraft, due to the high muzzle velocity HE-VT shells, great gun handling and your radar. The high speed and agility of the ship makes it a decent runner for capping points, evading enemies and generally moving around the map. The torpedoes can be formidable against cruisers and battleships if used correctly, though some people decide to leave them behind and focus on the guns. The 45 mm mounts are capable of providing decent secondary anti-surface fire against coastal vessels and are lethal to aircraft that they hit.

The Spokoinyy is arguably most effective as an anti-air flagship, since it is able to detect aircraft from even dozens of kilometres away and has an effective range of 7 to 9 km with the main guns. Absolutely no aircraft should be able to surprise the Spokoinyy while the search radar is active. The Spokoinyy, when used in Enduring Confrontation events, is the most reliable "Jack-of-All-Trades" ship seen in-game, combining formidable anti-surface firepower with a capability for anti-air that surpasses even many cruisers

Absolutely no battleship should be engaged with the 130 mm as the cannons are ineffective at damaging capital ships. When facing heavily armoured vessels, torpedoes are a must as they will be your only reliable weapon against them. The Spokoinyy should move evasively when being fired at by a major ship as a single salvo can be enough to instantly cripple or even destroy you.

The Spokoinyy is a cheaper and smaller version of the Neustrashimy-class destroyer, which was seen as being too large and expensive for economic series production, as well as too slow. The reduced length also came with the cost of the removal of the RBU-2500 anti-submarine rockets as well as a deck redesign in order to fit the same firepower the Pr. 41 Neustrashimy had. In order to do so, the aft 45 mm anti-air turrets were moved to the sides at the mast level separated by said mast, giving it parallel turrets. The other 2 turrets were moved as well, one stayed in front to the bridge behind the 130 mm turret and the second one was moved on top of a platform just above the second torpedo launcher at the aft right behind the second 130 mm turret. The fire control radars were moved, one on top of the bridge and one behind the main mast.