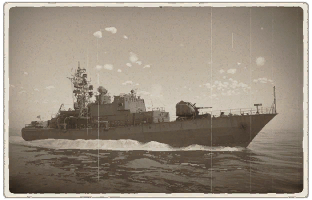 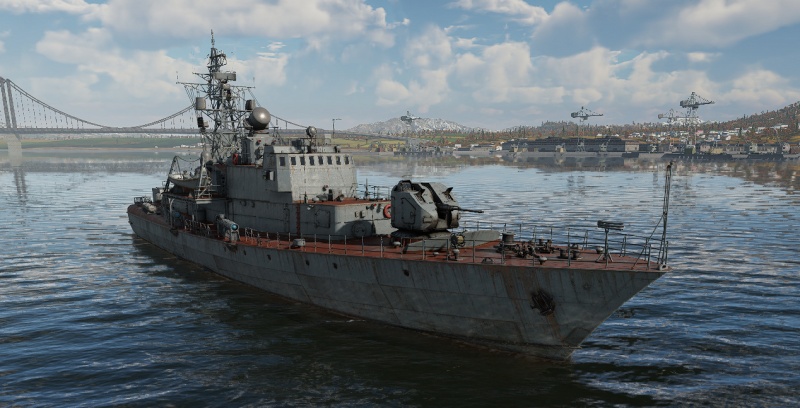 The MPK Pr.12412 is a rank V Soviet motor torpedo gun boat with a battle rating of 4.3 (AB/RB/SB). It was introduced in Update "Hot Tracks".

The MPK Pr. 12412 Molniya-2 has a mediocre armour and a really small crew (36 members); even .50 cal will cause more than enough critical damage to it. The armour should not be relied on. However, due to the displacement, size and speed, the Molniya is more than capable of doing fast and devastating attack on enemy vessels, including destroyers. The relative small profile helps it stay hidden compared to other vessels at the battle rating and it is able to hide in compact places that big ships like destroyers would not even care to look in. Sadly, this ship is relatively easy to ammo rack as the ammo is above the waterline. However, critical components such as engines and transmission are half under waterline, meaning center of mass shots are most likely to barely do critical damage to said components. Lighting this vessel on fire can be hard yet easy depending on the ammunition and calibre as the fuel tanks are on the bow below waterline and on the aft half under the waterline.

The Molniya leaves nothing to expect of a ship its size. However, as a patrol boat/sub chaser, it is really slow as other patrol boats, fast attack craft, destroyers and frigates are as fast as the Molniya as it only has a top speed of 61 km/h. Due to the short size, it is able to do tight turns much easier than said ships which can be used as advantage. It is able to accelerate and decelerate relatively fast, giving it a fast response time.

The Molniya is armed with a powerful AK-176M 76 mm semi-automatic cannon. It can be considered as the equivalent of the OTO Melara 76/62(C) seen in the Sparviero but with a slower fire rate. It has the same reload rate of the AK-726 seen in the SKR-1 but has half the RPM as it is a single cannon and not dual. The targetting speed of the turret is impressively fast and responsive even without mods (30°/s). Thus, it is able to target multiple targets with speed and track fast aircraft. As the primary weapon, this is your only weapon that can deal with a wide variety of threats, from small and light patrol boats and low flying aircraft to destroyers. The main downside of this system is that there is only a single turret with a single cannon. It only has access to HE and HE-VT. It is recommended to carry only HE-VT due to the increased explosive power and proximity fuse against aircraft.

The AK-176M has a low ammo storage (152 rounds only) and can be tricky to save ammunition while trying to engage enemy ships. For this reason, the captain must know where, how and when to aim and fire. It takes time and practice to maximize the effectiveness of the gun against surface targets, but due to its battle rating, said aiming issues are not an exactly "big deal" as long as the Molniya is spawned in the coastal fleet spawns and fights only coastal fleet vessels. When it comes to facing bigger ships like destroyers and frigates (mostly seen in uptiers), the AK-176M tends to struggle penetrating them as well as causing damage, this is mainly for the fact it only utilizes HE and HE-VT rounds with little to no armour penetration compared to the OTO Melara 76/62(C) which has SAP ammunition. This gun should be treated similar to what the AK-726 is but with half the power: fire only when possible, minimize ammunition waste and aim for critical modules. The main advatanges of the AK-176M compared to the AK-726 are decreased firing dispersion compared to AK-726 (meaning more accurate shots), increased aiming speed (both horizontal and vertical) and faster reload rate than SKR-7 but slower than SKR-1. The downsides are a lower rate of fire compared to the AK-726 and a lower ammunition count.

The Molniya is armed with a single station of the AK-630 30 mm rotary cannon Close-In Weapon System (CIWS). However, this system does not get the CIWS effect automatically. This is a devastating weapon (more than the M61 Vulcan mounted on the PG 02) due to the fast fire rate and calibre. Ammunition wise, it only uses self-detonating HE. Meaning it is not able to take heavier targets the AK-230 on the Pr. 206 could take. They, however, are enough to destroy light armoured vehicles in seconds as well as decimate aircraft. The AK-630 tends to overheat due to the increased fire rate. However, it gets a 60°/s rotation speed, meaning it is able to engage even the fastest aircraft when at close ranges as well as engage surprise enemies in seconds. Back to the CIWS system, the AK-630 can be used as a CIWS system with use of radar (head to radar section for further explanation).

The AK-630 is an excellent fast firing AA cannon, as it is able to put many rounds in the air with little room for the enemy to manoeuvre. Aiming the AK-630 is really smooth and easy. The main downsides are the tracers visibility (issue seen met with the M163) but not too significant and the high rate of fire.

The Molniya is armed with a 4 single tube 406 mm torpedo launcher, 2 per side, armed with the SET-40 lightweight anti-submarine torpedo. The launcher has very good launch angles and four torpedoes are quite reasonable however that is where the praise ends. The torpedoes have only one operational setting, with no option for upgrades and are slow. At 54 km/h a cruiser with keen eyes can outrun these torpedoes and with 8-kilometre range, they are not going to reach much past the effective range of your turrets. Worse still the torpedoes have a meek 80 kg warhead, which will not destroy ships larger than a corvette in one hit. These torpedoes have limited use in surprising unsuspecting captains should you face something armoured such as a heavy cruiser, and can be used should the main battery fall silent, however, they are unlikely to destroy anything without multiple hits and must be used at a range where they cannot be avoided easily.

The Molniya has access to BB-1 depth charges, useless in combat. However, it has access to the RBU-1200 anti-submarine rockets. Being rockets, they have a limited effective engagement range, high arcs of fire, and are very hard to aim in conjunction with primary weapons, however should a small boat decide to get too close or should you decide to engage a target at point-blank range, the barrage of 25 kg warheads smashing into the superstructure and hull of the hostile ship will almost certainly cripple it, if not outright sink it. 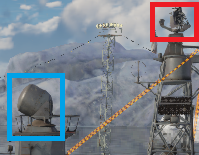 The Molniya has access to both search and tracking radars for both the AK-176 and AK-630. The search radar is located on top of the main mast and the tracking radar on top of the bridge. Enemy pilots do not account the existence of this radars as they are uncommon in game, use surprise to your advantage. Targeting radar makes engaging enemy planes an easier task with standard HE ammo. When using HE-VT, AA engagements will be finished in couple seconds. Be aware of the distance as in engagements with planes in distances smaller than 1km, weapons tend to overshoot even when following target indicator. Engage air targets as soon as you see them in a relatively close distance (2-10 km). Proximity shells will make this task easier.

This is the most complex yet most rewarding experience with the Molniya, not only because the use of the AK-630 gives some sense of power but it also can increase survivability quite high if used correctly. The radars are able to detect all sorts of projectiles (cannot track naval gun shells), rockets, missiles and bombs and show a lead indicator for the captain to fire at. Due to the high rate of fire, the captain is able to "spray and pray" at incoming threats and destroy them mid air. This is tricky but can be particularly useful when bombs are dropped from high altitude or if the ship faces the Saetta P-494 which has access to Nettuno anti-ship missiles. Using the AK-630 requires practice but it can be a very rewarding experience. Destroying air-dropped ordnance (like bombs) is tricky and harder than done in ground based SPAA. While the tracking radar tends to display an awkward lead indicator most of the time, this should be used as a guidance of where to aim, do not rely on it 100% of the time. It is relatively easy to engage aerial threats once one gets the hand of it.

As a patrol boat with heavy firepower, it is able to dominate the shallow waters of any match, not only because of the RPM but also because of the radar. However, the Pr. 12412 should not be used as a frontline vessel as every vessel it will face will have more than enough firepower to destroy it in seconds. The torpedoes can be formidable if used correctly, not only for the fact they are able to destroy whatever they hit but also because they are hard to aim due to the distances the Pr. 12412 has to navigate in order to get into a decent launch distance. The 30 mm should always be used to sink everything but heavily armoured ships. It is able to decimate light vessels in seconds as well as planes. For this same reason, the Pr. 12412 should be used as an anti-air flagship as it is able to detect and engage enemy planes in a range of 130 km. Absolutely no aircraft will surprise it while the search radar is active. The Pr. 12412, when used in Enduring Confrontation events, is the most reliable and "Jack-of-All-Trades" ship seen in-game. Not only because it is able to dominate the skies but also because it is able to decimate enemy convoys within seconds with the firepower and torpedoes, specially if said convoys are unarmed cargo ships.

The Pr. 12412 Molniya-2 small anti-submarine ship is the coastal patrol and inshore anti-submarine warfare version of the Pr. 12411 Molniya-1 large missile boat. Compared to the Pr. 12411, the Pr. 12412 has diesel engines and is slightly longer, it was fitted with a variable depth dipping sonar and missiles were removed. This specific version was exported 5 different countries, this being Vietnam, India, Ukraine, Cuba and Bulgaria.