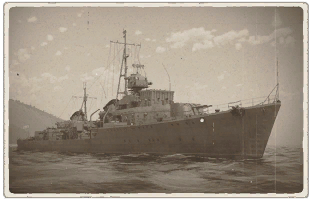 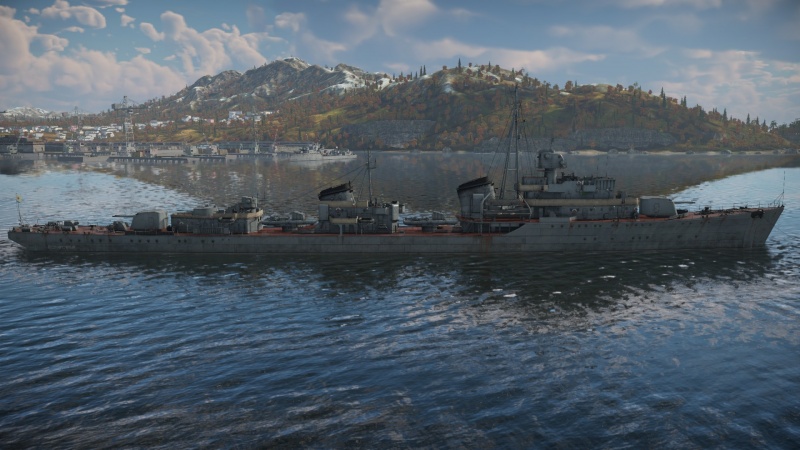 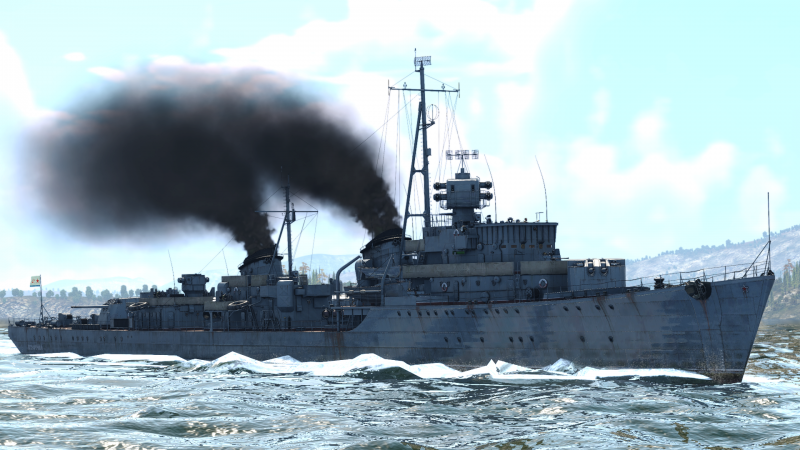 The Bezuprechny has little to no difference in armour compared to its ancestor, the Ognevoy. As expected in a destroyer, the armour is enough to withstand fragmentation and low calibre ammunition. However, the Bezuprechny has a reinforced bridge compared to the Ognevoy and additional gun shields for the 37 mm autocannons. The Bezuprechny should not be in any means a frontline vessel as all the guns seen at the battle rating will have no difficulties penetrating the armour and shredding it.

As previously seen in the Ognevoy, the mobility is not bad but is not great either. The additional armament does not significantly reduce the mobility of the vessel. While it may not have the same mobility and speed of other destroyers, it has a very neat rudder performance and a somewhat high cruising max speed (67 km/h).

The Bezuprechny is armed with 4 x 130 mm/58 B-13 semi-automatic cannons divided into 2 dual-mount turrets, capable of decimating enemy vessels in seconds, including heavy cruisers. The 130 mm cannons have access to 3 types of shells, HE, SAPCBC and HE-VT. While the HE shell has a powerful filler, the lack of penetration makes it impossible to combat medium armoured vessels even at close ranges. It is recommended to prioritise researching the SAPCBC round to maximize firepower against surface targets. HE-VT are an extra when it comes to air defense, proximity-fuzed 130 mm shells tend to annihilate any aircraft. However, while powerful, this rounds should only be used as an extra and at preferably long ranges or if the aircraft is flying in a straight line. The low muzzle velocity and the aiming speed of the turrets make engaging airborne threats at close ranges a nightmare. They are only recommended to be used when attacking low speed aircraft (like bombers) at long ranges (between 5-10 km).

Different from the Ognevoy, the Bezuprechny is armed with a dual-mount 85 mm/52 92-K 85 mm turret instead of a 76 mm turret. The placement of this turret is now behind the secondary turret instead of the front. While this can be seen as a minor change, this tends to potentialize the effectiveness of this weapon against airborne targets. While this gun has nothing special in particular, it comes in handy when dealing with fast and lighter surface targets against which the 130 mm is not worth using. It has access to HE, APHEBC, and HE-DF. As already discussed with the 130 mm, the HE is practically useless against medium armoured vessels. However, it is useful against lightly armoured targets like sub-chasers and PT boats. The APHEBC round adds an additional weapon to fight medium armoured targets. While it has low explosive power, it only stands 31 mm behind in terms of armour penetration compared to the 130 mm SAPCBC. This round, while not amazing, can be helpful against them, six guns are better than four. When it comes to air defense, the HE-DF shell can be used. While this relies on a time-fuze and not a proximity-fuze as the HE-VT seen on the 130 mm, the time-fuze is still very capable of destroying enemy aircraft. Leaving the targetting to the AI for it to automatically set the fuze and engage the targets is one of the most reasonable options but manual control can be done as well.

This is a new addition compared to the Ognevoy. The Bezuprechny gets one extra turret but removes the DShK 12.7 mm machine guns. These guns do exactly what they are supposed to do: deliver a substantial amount of rounds into the air to engage enemy aircraft. However, these guns have a dual-purpose as they are very powerful guns. While they are only fed by HEI-T belts, the stopping power for immediate defense against lightly armoured targets leaves nothing to expect. These guns can completely annihilate any lightly armoured target within seconds.

Here is where the Bezuprechny is starting to look closer to the following Cold War destroyers, especially the Spokoinyy. It is armed with 2 x 5-tube torpedo launchers. These are your main weapon against heavily armoured threats or when doing sneak attacks at distance. They have a max range of 4 km (10 km with torpedo mode) and can be used at almost point blank, the torpedo must travel 50 m at minimum to be armed. These torpedoes are one of the fastest ones seen at the battle rating (94 km/h), making it easier to aim at long ranges. However, the speed is drastically reduced if torpedo mode is active as it trades speed for range.

This is the most universal depth used for all types of engagements, being in deep water or at shallow waters. This depth is capable of hitting all sorts of vessels, including PT boats. The main downside is that enemy ships can see more clearly the water trail made by the torpedo which can make enemy vessels evade or fire at the torpedo.

This is the recommended depth when in deep water trying to perform long range engagements against big ships (most of them have bulkheads more than 4 m under the waterline). This is one of the riskier techniques as there is no way to launch them on shallow waters (most shallow water maps have water depth of 2-3 m). Only the captain and the team will be able to see the torpedo symbol while traveling close to them and it will not leave any significant visible water trail compared to the 1 meter depth torpedo.

The Bezuprechny is also armed with BB-1 depth charges. These depth charges are useless and not worth carrying in game unless they are used in very situational moments.

At the same time, the Bezuprechny is the first Soviet Cold War destroyer in game to have access to sea mines. It carries with a substantial amount of mines (x60) to completely block and trap strategic locations such as capture points, chokehold canals, etc etc.

The Bezuprechny is the first Soviet destroyer to have access to both search and tracking radars in-game. Enemy pilots are often unaware of the presence of the radar as they are uncommon in-game, use surprise to your advantage. Radars can give you a huge advantage with situational awareness as no plane will be able to catch you unsuspected. Be aware of radar interference (mountains, trees, tall structures in general) as they will affect both your search and tracking radar. There are blind spots with the radars which pilots can exploit but most of them will not do so as radars are uncommon in battles. Tracking radar can be used to manually engage targets. It is recommended to use tracking radar when engaging immediate threats the gunners are not engaging or low speed flying aircraft at long ranges (bombers). Most of the time, the use of tracking radar will not be necessary as gunners will take care of aircraft while the captain is engaging enemy vessels.

As an upgraded Ognevoy, the Bezuprechny is able to dominate the littoral waters of any match and the skies, not only because of the potent firepower but also because of the radar. However, it should not be used as a frontline vessel as every vessel it faces will have more than enough firepower to destroy it in seconds. The torpedoes can be formidable if used correctly, not only for the fact they are able to destroy whatever they hit but also because they are hard to aim due to the distances. The 85 mm should always be used to sink everything but heavily armoured ships in order to save the powerful ammo for more protected vessels. It is able to decimate light vessels in seconds as well as planes with the 37 mm. For this same reason, the Bezuprechny can be used as an anti-air flagship as it is able to detect and engage enemy planes in a range of 130 km. Absolutely no aircraft will surprise it while the search radar is active unless clutter is on the way. The Bezuprechny, when used in Enduring Confrontation events, is a "Jack-of-All-Trades" ship not only because it is able to dominate the skies but also because it is able to decimate enemy convoys within seconds with the firepower and torpedoes, specially if said convoys are unarmed cargo ships. However, most ships will take seconds to decimate the Bezuprechny if a wrong move is done, like engaging battleships with main guns or get the attention of heavy cruisers.