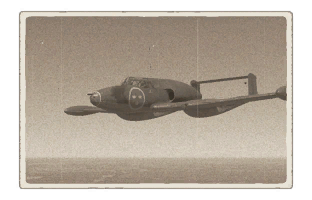 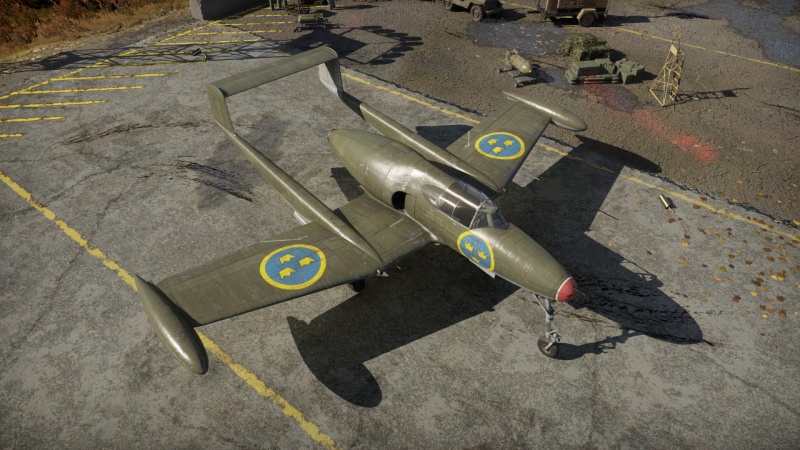 The A21RB is a jet-powered version of the prior A21A-3, giving it higher speeds and heavier ordnance.

The A21RB is a highly manoeuvrable plane, with a good climb rate. The guns, although a downgrade from the previous propeller-driven 13 mm version, they still provide enough firepower to down most targets efficiently. The A21RB is also the first to feature the iconic "Paddan" gunpod, giving it additional lead downrange. Along with central-mounted rockets, the plane is comfortable in both Air Realistic and Ground Realistic battles. The only downside is the airframe, that prevents the aircraft from reaching higher speeds. This is due to the engine being a bit too powerful for the plane, making it common to rip in straight lines and shallow dives.

The A21RB is distinctly different in looks and performance from all other planes found at the same BR-range. Along with the Yak-15, the Saab 21R is one of the two propeller-driven planes successfully converted into jet propulsion. Just like its Soviet counterpart, the solution comes at the cost of speed. Although a lot more powerful than the A21A-3, it still has the same airframe limitations, resulting in good turn-rate. The climb-rate is also significantly improved due to the weight of the vehicle, resulting in good vertical energy with the ability to stall out slower opponents. Getting back down can prove difficult however, as the A21RB has a rip speed of just 850 km/h, which it can accidentally reach if not careful. To avoid this, the plane features a small set of air-brakes, which aids in maintaining a safe speed. Experienced pilots can find a good use for them, along with the powerful flaps, to force overshoots, or to out-turn propeller-driven opponents. Be careful with the engine however! The propulsion of the A21RB is very primitive, and suffers from fuel starvation during extreme manoeuvres, especially in negative G-loads. This can be fatal when fighting vertically, as the engine drops all power almost immediately, and has to spool back up again before reaching the same efficiency as before.

Although the A21RB is meant for ground-attack, the plane lacks significant protection to withstand a lot of incoming fire. The pilot is well protected by metal plates and bulletproof glass, but the pilot's safety isn't the primary concern for the A21RB, as the tail section is incredibly vulnerable. This is due to the twin-boom design, making a tailstrike twice as likely. And since the tail connects to the wing-section, the plane tends to lose tail-control when struck by wing damage. The engine is very large in comparison to the rest of the plane, making it a common target. The A21RB should avoid all possible damage, as surviving large amounts of fire is highly unlikely. Pulling away from head-on engagements increases the survivability immensely. Avoiding the enemy airfield is also important, as the A21RB lacks the speed to keep it away.

The A21RB shares the same 20 mm cannon found on the previous A21A-3. This cannon is near identical to the Hispano Mk.V, only with a 30 rpm lower fire-rate. The shells perform the same as on all the other 20 mm jets, making it highly devastating against all types of aircraft. Armoured targets perform favourably with this cannon, as the air-target belt can cause some mishaps during short bursts. The cannon runs out of ammunition quite quickly compared to the machine-guns, so saving it by only making use of the small calibre guns first can be ideal for spraying.

The A21RB features .50 cal machine guns, being identical to the later American ones. Although a direct downgrade from the Swedish 13 mm previously found on the plane, the A21RB makes good use of these cannons, as they allow for distanced engagements, along with additional firepower to back up the 20 mm cannon. Their ammo count is quite high as well, making them great for strafing, and finishing off heavy bombers.

A unique feature only found on the A21RB is the ability to use the abstract gunpod. Commonly known as "Paddan" (directly translated to "The toad"), the gunpod features eight 8 mm Ksp m/22, repurposed from old J8 Gladiators. Although weak guns by nature, having eight of them gives the A21RB unprecedented fire-power shredding anything that goes head-to-head with it. The ammunition count is low, however, which forces pilots to use them carefully. Saving the gunpod by only using .50 cal on distant opponents, allows the A21RB to get rid of opponents during short bursts, which can be incredibly useful if mastered correctly. It's still important to mention that this gunpod is incredibly heavy and not very aerodynamic, and thus takes a heavy hit on the overall speed of the plane.

The A21RB has a lot of additional advantages over the prior A21A-3, especially when it comes to the ground ordnance. The ground rockets are finally mounted in the middle of the plane, firing one at a time starting from the right. Since the Swedish rockets, especially the m/49 rockets, feature amazing ballistics with little inaccuracy, that along with high penetration, makes for some highly effective air-support. And since the A21RB is quite light, it can easily perform several passes on opponents, which is quite important against heavy opponents.