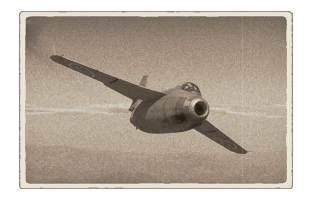 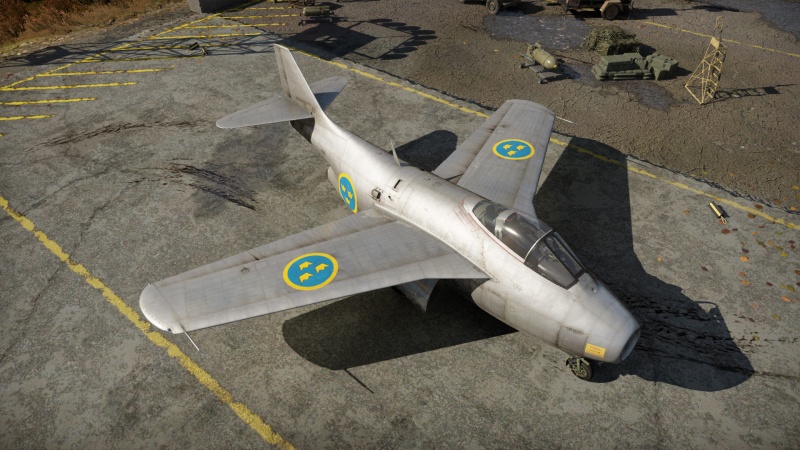 The J29A is a single-engine jet fighter, that was developed by the Swedish company SAAB in the late 1940s. One of the main design features of this aircraft is its swept-back wings, which was designed after that SAAB had managed to acquire German documents from the war, that proved that swept-back wings were necessary when trying to achieve higher speeds. The J29A also features a Swedish license-built version of the British de Havilland Ghost engine. The armament consists of four 20 mm akan m/47C, a license built copy of the British Hispano Mk V, but with a lower rate of fire. The first prototype flew in 1948, and the aircraft then proceeded to enter service in the Swedish Air Force, Flygvapnet in 1951. It remained in service until 1962 and never saw any combat use.

The J29A has a great top speed, along with an effective rudder and reasonable roll rate. However, it turns poorly at all speeds, and bleeds energy rapidly when forced to do so. It also does not accelerate well.

The stout little J29A is a sneaky little fighter which might be underestimated during a head-on. A 64 mm bulletproof windscreen is in place, which, since it is sloped, provides 165 mm total protection, allowing the pilot to have a greater chance of survival in a head-on. However, unless highly experienced, pilots should avoid head-ons, especially against aircraft such as the Super Mystere B2 and the G.91 YS which also feature 30 mm DEFA 552 cannons. Make sure to avoid the B2 as well, as the AA.20 air-to-air guided rockets will make the J29A have a hard time standing up to this aircraft.

The J29A, also known as the "flying barrel", is armed with 4 x 20 mm Akan m/47C cannons that perform well, but still lack a bit of a punch for a fighter. The J29A has a good top speed but acceleration is not the quickest. Once it has built up speed it can catch most enemy jets that it will face, but something that will help it greatly in doing so is having an altitude advantage to dive on the target to get that extra acceleration to hunt down targets.

Turning with the J29A is a bad idea since the plane loves to bleed speed when turning, even though the J29A is good at turning, it can only do so for a small amount of time, before losing enough speed to be easy target for incoming enemies. The J29A's strengths are the Hit & Run tactic also known as Boom n Zoom. Should the J29A be uptiered against 8.7, it will struggle to keep up with the enemy jets but that will make the J29A into an excellent support fighter: when allied jets are engaged in combat with the enemy and make that enemy bleed its speed, the J29A can swoop in and help the teammate.

When taking off in RB and Sim modes you must be careful, J29A struggles to get off the runway, spooling, pressuring your front landing gear right before you engage flaps, and using flaps are all essential to a safe takeoff in this plane.

Enemies to be aware of:

When facing these enemies and you see them from distance it's great to take note of any close teammates to help the J29A stand a chance to not be Boom-n-Zoomed, this is why flying with a squadmate that is in a more dogfight-suitable aircraft is highly recommended to make the most out of the J29A, as they will often be able to setup a target for the J29A's Boom-n-Zoom runs.

The original specifications for the R1001 called for a radar rangefinder, four Bofors 20 mm akan m/45 cannons mounted in the nose with 180 rounds per gun, external fuel tanks and a top speed of 1,000 km/h. The engine was originally supposed to be an indigenous design by the company STAL but by late 1945 Sweden had gotten the green light for acquiring the new state-of-the-art de Havilland Ghost engine. There are several reasons why Sweden was allowed to buy this engine even before it was finished, but the two main factors were the economic state of Britain after the war and Sweden's good relations with the company de Havilland. The engine was however not the only thing which changed at an early stage. Originally the R1001 featured straight wings, as was common at the time. However, by pure luck Sweden was able to acquire some German WWII research papers from a Swiss source regarding swept wings on aircraft and their increased performance at high speeds. Thus it was decided to change the R1001 design to feature swept wings. The first blueprints of the R1001 featuring swept wings were finished by late 1945 and within 3 years a prototype had been constructed and was ready for flight testing. During these 3 years the design would change even further from the original concept. The radar rangefinder was dropped for unknown reasons, and the Bofors cannons were switched for Hispano designs due to delays at Bofors. By 1947 the aircraft had also received the designation J29.

The J29 prototype flew for the first time on the 1st of September 1948 and immediately showed incredible performance. The pilot chosen for this flight was SAAB's test pilot at the time, an Englishman by the name Robert A. "Bob" Moore. He was a British squadron leader with previous experience flying jets and was thus suitable for the tests. The test flight lasted for half an hour and after a successful landing, Moore stated that "on the ground, it's an ugly duckling, but in the air it's a swift." Like many aircraft which pick up a nickname due to a specific feature or shape, the J29 would fairly quickly receive the nickname "Flygande Tunnan" (The Flying Barrel) or just "Tunnan" (The Barrel) for short. Initially thought of as degrading, the nickname Tunnan would not only become the official name for the aircraft but would also start the SAAB tradition of naming their combat aircraft, a tradition which persists to this day.

After correcting a few production errors the prototype would not only achieve the specified top speed of 1,000 km/h but it would even surpass it, achieving a sustainable speed of 1,060 km/h at one point. The design of the J29 showed a lot of promise for the future and talk of future variants would begin even before production had started. In fact, just a month after the prototype had taken to the air, there was talk of implementing attack rockets and deflatable internal fuel tanks.

Production of the first J29 variant, the J29A, would commence in 1950 and deliveries to the air force would start in early 1951. It was quickly realized that the internal fuel capacity of the J29A was too limited and work began on implementing the previously discussed internal deflatable fuel tanks. This would be realized in a new version of the J29, designated J29B, which entered production and service in 1953. The J29B's new internal fuel tanks gave it a 50% increase in fuel capacity compared to the J29A. The J29B would be followed by an unarmed reconnaissance version called the S29C which had been planned at an early stage. The S29C was to be followed by the J29D, featuring increased armament and an afterburner, but due to a variety of reasons, the J29D never entered production. Instead, a modified version of the J29B, called the J29E, would enter service. The E-variant featured a new dog toothed wing which increased maneuverability at high speeds. The J29E was soon followed by the J29F which was an upgrade-program for 210 J29B and E aircraft, increasing their performance and allowing them to serve throughout the 1960s.

As mentioned previously it lacked the internal deflatable fuel tanks that were fitted to the later models and thus had a fairly limited range. It could however equip two underwing drop tanks weighing up to 600 kg each. This increased the range to acceptable levels. Interestingly, the drop tanks could also be armed as incendiary bombs via a switch box in the cockpit. Beyond drop tanks, the aircraft were also capable of carrying a wide variety of rockets for different missions.