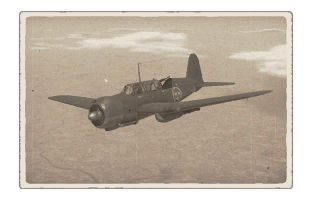 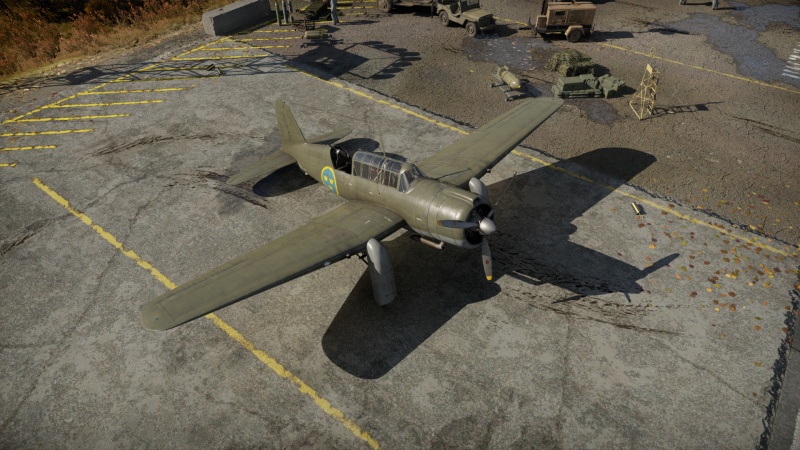 In the late 1930s, the Swedish Air Force was looking to replace their ageing Fokker S 6 biplane reconnaissance aircraft with a newer aircraft. Work began by Armstrong Siddeley Jaguar and was designated as the L 10, however in 1939 after merging with Saab, the designation was changed to Saab 17. Updated requirements required the reinforcing of the wings to be able to utilise the aircraft as a dive bomber though further modifications were necessary to ensure clearance of bombs mounted on the underside of the fuselage so they would clear the propeller arc when dropped during a dive.

Though only serving for a few short years with the Swedish Air Force due to the advent of turbojet aircraft, the B17A continued to serve with other countries for another 20 years. In War Thunder, this bomber featuring a Swedish license-built Pratt & Whitney Twin Wasp engine can hustle to its target (though not faster than many fighters it will face), but diving towards the ground and making a b-line for the target will ensure you get there as fast as possible. Sometimes making a bit of a wide arc along the sides of the map will ensure fighters will ignore you until they start seeing you blow up a bunch of ground targets and become a threat to their side winning.

It often happens in the early rank matches of the game where the smaller bombers such as the B17A can decisively win the match by taking out all of the ground targets. Some pilots become known for effectively eliminating ground targets with their light bombers in so much that at the beginning of the match and after every respawn, they are immediately targeted for elimination to prevent the match from quickly ending in the enemies favour.

The B17A is relatively manoeuvrable aircraft for a light bomber, especially when loaded down with ordnance. Though it will not turn fight very well, it will not be as stiff as some find medium and heavy bombers to be. Through the use of flaps and extension of landing gear to act as a speed brake, pilots will find that the B17A can be effectively used to bomb columns of vehicles or other targets of choice found on the map.

If pressed into an air-to-air battle or if an air target of opportunity presents itself, the B17A can be effective in either damaging or disabling the enemy aircraft. If the situation becomes dire and the B17A is still holding onto its suspended ordnance, it might be best to go ahead and drop them to allow for more manoeuvrability and increased chances of survival.

When using smaller bomb types, it is best to use this aircraft as a low-altitude bomber as trying to use it at mid or high altitude, the AI vehicles will tend to be able to easily avoid the bombs. Also, the smaller bombs tend to do piddly damage against bases, but when working with other bombers every little bit helps. 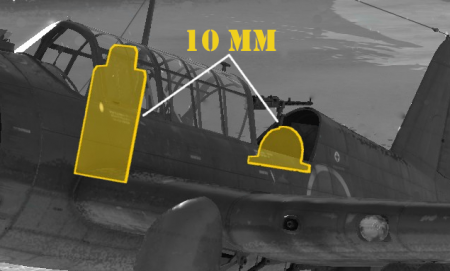 Protective components found in the B17A.

The Swedish Air Force chose to outfit the B17A with license-built copies of the Browning M1919 machine gun, however originally was calibrated for 6.5 mm however this round was found to be less effective against fabric-covered aircraft and so the gun was recalibrated up to 8 mm. The Swedish variant is listed as the Ksp m/22 machine gun of which two were mounted on this bomber with a gun in each wing. To be of really any use to the pilot either in aerial combat (if forced into it) or during ground attack, convergence must be set preferably in a range of 250 m - 400 m for best results especially with ground attack as this will allow firing capability on ground targets with ample room to manoeuvre without fear of crashing into the ground.

The B17A can be outfitted with the following ordnance:

While the initial payload option consisting of nine 50 kg bombs might feel a little on the weak side compared to a mighty 500 kg bomb. Fear not, as other nations' aircraft such as the comparable Sukhoi Su-2 or the massive Farman F.222.2 and its 52 x 50 kg bombs can completely devastate columns of vehicles on early maps. These light trucks and anti-aircraft artillery are easily dispatched with the 50 kg bombs and can easily reward the bomber pilot with the awards "Antimech", "Heavy Metal Fury" or "Thunderer" to name a few.

Larger payload options should be reserved for targets which tend to be the tougher nut to crack such as pillboxes or medium and heavy tanks. Base bombing should be avoided unless flying in arcade battles without the threat of enemy fighters, but at the rate of 450 kg or 500 kg at a time, it will take a while to eliminate a base unless you are working with others. With a centre-slung bomb mounted on a trapeze, there is a slight delay from release for the mechanism to actuate and fling the bomb free of the propeller arc to ensure enough clearance especially if the aircraft is in a slight dive. This is similar to early US light bombers/attackers which had a similar configuration.

The B17A is defended by:

This single pivotable 8 mm machine gun is mostly a last resort defence weapon. With the limited range of motion and its blind spot directly to the rear (vertical stabilizer blind spot), the pilot will need to "wag" the tail of the aircraft to ensure the gunner can engage any trailing fighters. The entire bottom of the bomber is unprotected and largely from above and the sides too.

The B17A is used effectively as a low-altitude bomber, however, it can also be used to an extent as an attacker too.

Several different configurations of bombs area available for the B17A depending on the targets available on any given map. The smaller 50 kg bombs tend to be used best on low-altitude quick strikes against columns of vehicles driving down a roadway. Low-altitude works best here as the vehicles do not have as much time to scatter and avoid incoming bombs. The 50 kg bombs do not have a huge shrapnel radius, so the less time the vehicles have to scatter the more likely they will be destroyed by direct explosion or the shrapnel wave which follows.

The larger 250 kg and 500 kg bombs are not as effective against mobile vehicle targets unless they clustered relatively close together where the splash damage from the bombs will take out multiple targets at a time. Targets which are more heavily protected such as pillboxes, medium and heavy tanks are also good options for the heavier bombs. Though these bombs will put a small dent in the larger bases, those should be left to medium or heavy bombers which can carry multiple 500 kg+ bombs, however, if bombers are grouping up on a base, do not hesitate to lend a hand if you are close enough to toss in a few bombs.

Typically this bomber will be found at a lower altitude and after dropping bombs (and either waiting for the reload timer or heading back to base), there are typically targets of opportunity which the 8 mm machine guns can inflict damage or destroy. Due to the limited machine guns on the aircraft, it may be necessary to make a second pass. The manoeuvrability of this aircraft is sufficient enough to quickly turn around and make another pass. Dwelling in one target environment for long is never a good option as you will draw the attention of fighters so be on the move and keep the speed of the aircraft at a good clip to ensure potential energy is there when you need it.

Late in the 1930s, aircraft manufacture Armstrong Siddeley Jaguar began developing the L 10, a reconnaissance aircraft in response to requirements set forth by the Swedish Air Force. The hopes were to replace the ageing biplane force of Fokker S 6s. Partway through the initial development of the aircraft, ASJA merged with SAAB and as such, the designation of the aircraft changed to SAAB 17. In addition to the reconnaissance portion of the aircraft’s capabilities, the wings were strengthened in order to be able to withstand higher forces imposed when utilising this aircraft as a dive bomber. Though outfitted with a centreline hardpoint to mount bombs, problems during dive-bombing would have occurred because released bombs would impact with the propeller. To avoid this and clear the propeller arc, a rigging system was built to ensure the bomb was thrown clear of the propeller arc in the event of dive-bombing.

The B17 saw limited usage with the Swedish Air Force, however, forty-six were sold to Ethiopia where they remained in active service all the way through 1968. Finland acquired two aircraft, however, they were utilised as target-tugs and quickly were destroyed during accidents. With the unique landing gear configuration, several were modified for usage with skis or floats for alternate landing locations, though the majority were outfitted with the unique covered landing gear.

As it was rearming its air force in the late 30s, Sweden decided to acquire its own high-speed scout bomber to perform tactical functions on the battlefield and support ground troops. The designing of the aircraft was entrusted to ASJA, whose engineers developed a project for a single-engine mid-winged aircraft that was quite technologically advanced given the state of Swedish manufacturing.

In order to implement the project, they had to recruit a team of experienced aircraft builders from the American company Northrop, and the project was brought to life with their direct involvement. At first, the aircraft was designed primarily to perform scouting operations and was supposed to be equipped with R-1830-SC3-G Twin Wasp engines from the American manufacturer Pratt & Whitney. However, the American moratorium on the sale of military technology to potential enemies in the upcoming war, the merging of ASJA into the SAAB concern, and protracted deadlines for reorganizing and rearming the air force led to some adjustments to the project.

First of all, the aircraft was rather quickly changed from a scout into a bomber, so it was given a bomb bay, and the doors on its deployed landing gear had to serve as something akin to an air brake for dive-bombing. Second, problems with the delivery of a batch of American engines made it necessary to equip the first mass-produced version with less powerful copies of British Bristol Pegasus XXIV engines. A version of the aircraft with the American engine eventually saw the light of day under the designation A after the mass-produced version of the B17B with a British engine had already been manufactured. A total of 300 SAAB B17s were manufactured in various modifications, including aircraft equipped with floats and even skis for use with winter airstrips. These aircraft were used in Sweden until the late 40s, and some of the bombers were exported (for example, to Ethiopia, where B17s were used up until the late 1960s).