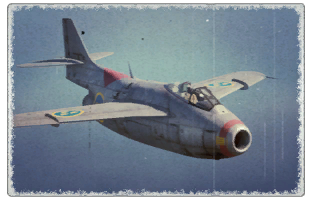 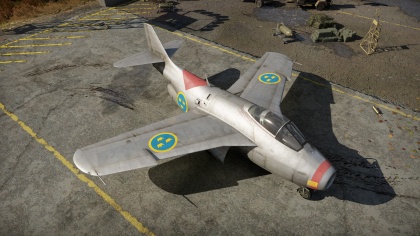 The J29F is the final variant of the J29 "Tunnan" family, combining excellent engine performance, and maneuverability for a well-rounded fighter at its battle rating. It is the only J29 able to be outfitted with the Rb24 air-to-air missiles.

The J29F will come off as heavy and quite sluggish for any pilots new to the plane. But when the J29F gets upgraded with suspended armaments and better performance, the plane starts to feel a bit more capable. The superior roll rate and vertical energy come in handy in many situations, and with two Rb24 air-to-air missiles, the J29F becomes a threat to most enemies in the sky. The J29F can be described as a "Jack of all trades" in many areas. Even if the J29F is outclassed in every area by some vehicle, a pilot who knows their enemies will find a way to outperform them in this plane. Players with previous experience in the J29A or J/A29B will most likely find the new afterburner a welcome upgrade to the vehicle. The RM2B engine carries this plane in any direction the pilot wishes and significantly improves the acceleration. However, just like all the other J29 variants, the J29F suffers from bad defensive capabilities. While many opponents find it easy to get rid of people behind them, the J29F has a hard time both losing energy and maneuvering in different directions. This makes it difficult to get rid of opponents following close behind, which should always be taken into consideration when planning an attack. 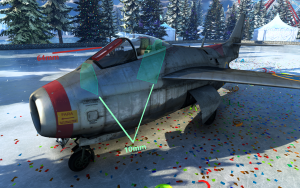 Armour found inside the J29F.

The J29F is outfitted with 3 armour plates spread out in different areas of the plane. The most important of which being the bulletproof glass of 64mm, which will save the pilots' life in most headons. The J29F is quite strong in terms of survivability, being able to tank a lot of low-caliber shells without much damage. This can help a J29F pilot stay in battle far longer than usual, or return to base safely. It is important, however, to avoid incoming damage since surviving incoming shells should never be expected as "survivable". Many shells will set the J29F on fire, knock out its engine, and destroy the tail section. All of which will by themselves put the J29F out of combat.

The firepower is the same as on all the other J29 Variants found in the tech tree. The Swedish Akan m/49C is a somewhat potent 20mm cannon that is comparable to the An/m3 cannons found on the F9F-8. This gun can be experienced as weak when compared to 30mm revolver cannons found at the same battle rating. But despite requiring a longer gun time, the high ammo count of 720 rounds will significantly help people who feel less comfortable with their aim.

The J29F can be outfitted with the following ordnance:

In Realistic Battles, the J29F is similar in playstyle to that of a MiG-15bis, while still sharing some similarities to the F-86F-25 Sabre. A J29F keeps energy very well when the afterburner is used, giving it a strong rate of climb and acceleration. This means the J29F can easily energy fight most enemies it encounters. However, the J29F should never be seen as a one-trick pony. When coming face-to-face against stronger and faster opponents, energy tactics can no longer be used. In that case, it can be better to use the superior turn- and roll-rate, to avoid incoming attacks from above. If missiles are researched, these enemies will most likely be forced to leave you alone since they have a hard time dodging the 10g pull of the Rb24.

It is very important to know your enemies when using the J29F, to apply the right tactics against them. It is strongly recommended to look up the strengths and weaknesses of different opponents it may face. The J29F is never the strongest in any area but is always better than its enemy in one or two areas, which should always be exploited.

The J29F is the only J29 "Tunnan" equipped with air-to-air missiles. The Rb24 is a license-built variant of the American Aim-9B missile. This missile is one of the key upgrades the J29F can use to its advantage. The Rb24 is quite slow when it comes to launching, and tracks enemies quite poorly. Despite this, the missile forces faster opponents to extend, and unaware opponents to combust. The missile gives the J29F more ways to deal with enemies, at a slight performance cost.

When using these missiles in battle, it can be useful to go for a Side-rushing strategy. This will put the plane in a superior energy situation if combined with climbing. This strategy helps the missile the most since it lets the J29F appear behind enemies, to launch the Rb24 when they're busy. It can also be important to get rid of the suspended armament as soon as possible, to improve the overall flight performance. Missiles shouldn't be wasted, however, since they help in dealing with faster targets. The Rb24 isn't very good at turning but can easily eliminate fighters climbing upwards, or those travelling at slow speeds. The optimal launch distance for the Rb24 is between 1 - 3 kilometers.

In Realistic Battles, a fairly common strategy is the so-called "rush" strategy. During a rush, a jet pilot will maximize speed rather than altitude, trying to intercept enemy players who won't expect them. The rush strategy can be used in the J29F to a certain degree. Since the J29F has an average top speed, getting to the enemy team can be done quite swiftly. It's however, still recommended to gain some altitude since speed won't be lost when pushing the plane slightly upwards.

The rush strategy can allow a J29F pilot to easily shoot down planes who don't expect it and works wonders when paired with some altitude. The only downside is that the J29F might be attacked by an overwhelming amount of enemies, forcing the J29F to play defensively. This is why the Rush strategy is recommended to pilots who have friends or teammates to back them up since it's very difficult to win a defensive situation.

A more effective strategy in Realistic Battles is a side rushing strategy. This strategy is executed the same way as the rush strategy, except the jet is flown more towards the side, giving you extra time to gain speed. The J29F has no problem accelerating but dislikes being forced into a defensive situation. This strategy can be paired with a slight altitude gain to put the J29F in a superior position. Although the J29F won't be the first one to the battlefield, it will be able to down more planes by keeping people away from its back. A pilot should still be aware of his/her surroundings, in case the enemy decides to take a similar route.

The side-rushing strategy also improves the usefulness of the Rb24 air-to-air missiles. The side-rush can be utilized to end up behind the enemy team, making good use of the Rear-Aspect lock technique. However, these attacks are usually achieved when fighting against unaware players.